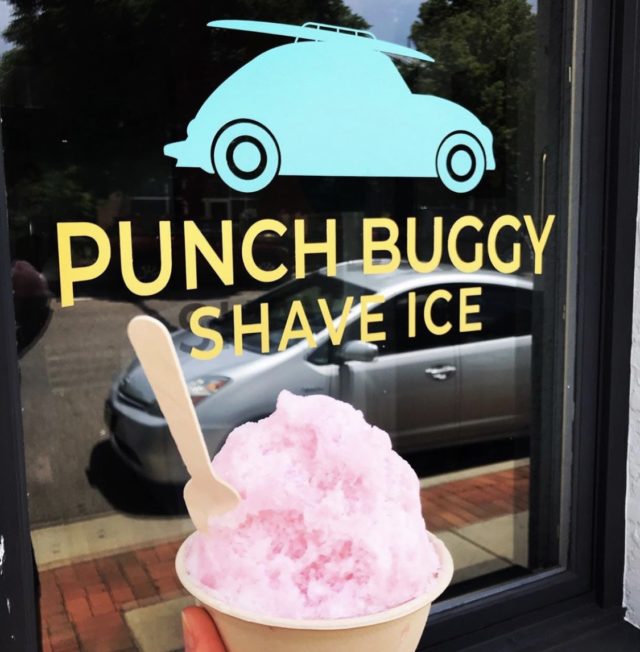 It sounds pulled out of a Dickens novel: A woman named Snow by her half-Canadian parents is raised in Hawaii, moves to the mainland and opens a shop that sells ice. But truth is stranger than fiction, and as of last weekend, Neige LaRue runs Punch Buggy Shave Ice in Louisville.

“It came from my dad, who is French-Canadian. I think where he grew up was pretty freezing,” LaRue says of her name. “He grew up in the ’60s and ’70s, and he was a total hippie and moved to California and then to Hawaii. They wanted to name me Snow, and he said, ‘How about we do snow in French?’”

It wasn’t the only unique thing about LaRue’s childhood. Anyone that grows up in Hawaii (LaRue’s family moved to the Big Island when she was 9 months old) has a different childhood than you and me. Living in a yet-undeveloped portion of the leeward side of the island, near Kona and halfway up a mountain, LaRue says her early years were as magical as you might imagine.

“The beach was our babysitter,” LaRue says. “We would spend all our weekends at the beach, and my sister and I would walk down to the beach after school, and my parents would swing by when they were done with work. It was simple and amazing.”

Because of its charms, Hawaii has attracted generations of pilgrims from around the world — from the early Polynesian settlers to European missionaries to U.S. mainland defectors and military members to Japanese and pan-Asian vacationers and immigrants. As a result, Hawaii has a unique, global culinary tradition that takes the islands’ tropical crops and blends them into a wide array of dishes you can’t get elsewhere — from poi to sushi to Spam musubi to Kalua pork to chicken teriyaki to lomi lomi, and on and on.

One such cross-cultural creation is shave ice, which originated in Taiwan in the seventh century and was later brought to the islands by Japanese immigrants. On LaRue’s home island, in fact, shave ice is still called Japanese-style shaved ice.

Of course, shave ice was a big part of LaRue’s childhood, but the ice you’ll get at the pocket shop on Louisville’s Main Street will look and taste a little different than what she had in Hawaii. For one, island shops tend to serve shave ice by the bucket. And two, some load it up with artificial syrups. LaRue wanted to add another culture — Boulder County’s — to shave ice at Punch Buggy by slightly reducing the portion size and using all-natural syrups and toppings. That approach also differentiates it from other ice-based treats like snow cones, Italian ice and Slurpies.

“It’s light and sweet and fluffy, and I think the consistency of our ice is different,” LaRue says. “When you get a snow cone, it’s thick and chewy, and this is light and airy. I know parents are really happy that the syrups are all natural and it’s not going to stain their kids’ mouths. … You go to Hawaii, the shave ices are the size of a basketball. We’re doing it smaller, in a cleaner, more natural way.”

Punch Buggy serves familiar flavors like cherry, grape and orange, but gears others to more proven palates with flavors like yuzu citrus, dragonfruit, pickled mango and lilikoi. There will always be at least one Hawaii-inspired flavor on the menu, and people can top their ices with fruit, toasted coconut, coconut whipped cream, mochi balls and more.

LaRue travels back to Hawaii often — her parents have lived there for 40 years after bouncing around North America. LaRue, her husband and two children did a fair amount of bouncing around themselves, between New York and California before breaking away from the grind and moving to Colorado.

“We were living in San Francisco, and [my husband] was working for a startup, and we were miserable. We had a 1- and 3-year-old, and we really did not want that experience for our kids. I had a simple upbringing,” LaRue says.

It’s not the same, but LaRue has found a little bit of home through her shave ice venture. It’s a testament to the magic of the islands. If she can’t be on its beaches, LaRue can bring some of Hawaii to Colorado through one of its sweetest, most iconic treats.

Punch Buggy will be open daily (except Monday) during the summer months, then weekends during winter, when ice becomes something we shave off car windshields onto pavement instead of from a special block atop ice cream. But if the woman named Neige can make it in tropical Hawaii, she’ll probably figure out how to make aloha work here, no matter the weather.