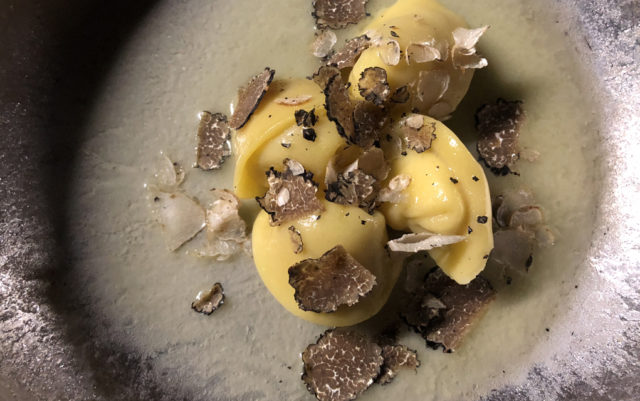 The truffles you might eat at OAK at fourteenth this weekend, or that you might buy from Cured this month, or, if you were fortunate enough to get a reservation, that you might have had expertly prepared at Frasca on Tuesday, Dec. 4, were not foraged by pigs. Pigs damage the delicate root systems on which truffles grow and though their sense of smell makes them fantastic truffle hunters, their reckless appetites spur them to eat the truffles before their handlers have any chance to wrangle them. So notorious are pigs for eating truffles that their use in truffle hunting has been banned in Italy, where famed white truffles grow in its northern Piedmont region.

But they were, or will be, most likely discovered by dogs, gathered by humans, shipped by planes and prepared in Boulder County for our enjoyment. Dogs, after all, have senses of smell 100,000 times greater than ours and trained canines are adept at finding the odoriferous fungi.

We have about three days after its plucked from a tree root to enjoy the truffle at its peak, says OAK at fourteenth Chef Steve Redzikowski, who will highlight the white and black truffle on an à la carte menu this weekend (Dec. 5-7).

“They’re not going to go bad,” Redzikowski says if you let a truffle go past three days, “but what they will do is turn soft, and once they turn soft, you can’t shave them and they lose their fragrance.”

Redzikowski has been working with Washington-based Foods in Season to bring in truffles for the last nine years. The company specializes in securing and expediently shipping fresh, wild foods around the world, and works with individual truffle hunters in Italy’s Piedmont and France’s Burgundy and Périgord regions to secure fresh truffles. Every week during truffle season — November to mid-January in Europe — Redzikowski talks with the Foods in Season truffle liaison, who lets him know what’s turning up in the woods, what’s fresh, what’s in bulk. Medium-sized white truffles had a boom this week, for instance, and they’re coming out of the ground “super clean,” Redzikowski says.

“They’re looking for no blemishes, not a lot of holes in them. If there are holes, then there’s dirt, then you have to clean them out more,” he says.

There are hundreds of truffle varieties, but we typically seek but a few: white, black, Burgundy and Oregon. White truffles are pungent, flavor-saturated earth gems and they command high prices, almost four times their weight in gold. Black truffles are much more moderately priced, and their flavor is mild, subdued and earthy.

Redzikowksi will use both on the OAK menu, with black truffles from both Périgord and Burgundy. It includes such palate-exploding dishes as 7x wagyu beef tartare with truffle aioli and crispy parsnips; aged Parmigiano Reggiano ice cream with olive oil, frico (cheese crisps) and shaved truffles; and an oak-wood-fired Pat LaFrieda dry-aged beef hamburger with aged cheddar and a mountain of shaved truffles.

There is some conventional wisdom that says less is more when it comes to truffles, that the flavor is so robust, particularly for white truffles, that to overdo it with the ingredient would cancel out anything else on the plate.

Not so for Redzikowski, or me, or I’m guessing a fair number of you.

“When I eat something with truffle, I want to be overwhelmed with truffle,” Redzikowski says. “We’re doing radiatore pasta and an extruded Parmesan broth with it and white truffles. The idea is that the [pasta] is just a vehicle for the truffles. In that case, it’s about overpowering. You want a blast in the face of the truffles.”

But there is room for nuance, he says — for instance with the 7x wagyu tartare, he’ll use a combination of black and white truffle so the beef doesn’t “just kind of disappear.”

The truffle flavor also doesn’t reach terminal velocity at any point, though it may feel like it could with a mouthful of its unique, savory, umami, musky flavor.

“The more you put on, then you’re going to have more per bite and the more it’s going to impact flavor. That’s why, to me, when you put a dish on, you should charge a little bit more to give [the customer] more. You go a couple places and you get a couple shaves and I’m like, ‘Shoot, I really want to try those truffles,’” he says. “If you’re gonna put ’em on, put ’em on.”

À la carte dishes at OAK’s truffle dinners range from $12-$42, a graciously moderate price point for such a heralded ingredient. “You can order one thing or three or seven or everything,” Redzikowski says. “You’re not stuck with having to pay a huge bill. We’re trying to not make it intimidating. A burger is super comforting, or you can go in and ball out and get the prime rib.”

If you can’t make it to OAK this weekend, Cured is taking truffle orders. They’re due every Wednesday through December with pickups on Friday. They go for $2 per ounce for black truffles from France, and $40 per ounce for white truffles from Italy, with a 20-ounce minimum.

Once you get the truffle or truffles home, there are plenty of simple dishes you can prepare to maximize your culinary investment. Cured suggests giving the black truffles a light amount of cooking to reinforce their strong, earthy flavor, while shaving the white truffles raw is best practice.

Redzikowksi says any dish with a lot of fat will stack up well with either truffle. A simple mac and cheese will pull the flavor of the truffle into it and give it a cozy home. Or if you’re feeling more adventurous, Redzikowski says he can vouch for homemade seared scallops with a healthy dollop of sour cream or crème fraiche and a sprinkle of toasted hazelnuts.

But also, “a burger with white truffles can’t be beat,” he says.

Truffles aren’t only for food, mind you — find a number of truffle-celebrating cocktails on a quick Google search, from truffle martinis to truffle old fashioneds.