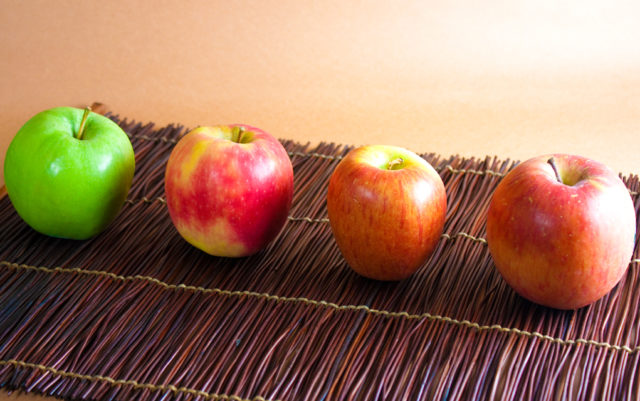 I don’t have any energy to waste, personally and environmentally. I figure if I’m lighting the oven to cook some chicken or a meaty kabocha squash, it’s wrong not to roast something else at the same time. So I fill the racks and bake a couple of potatoes, ricotta corn bread, oven tomato sauce or eggplant slices. It means dinner for days and great leftovers for lunch.

More often than not, I also bake a couple of apples even if I don’t know when I’m going to eat them.

Raw apples do taste great (depending on the variety), but roasting does something transformational that boiling, steaming and microwaving can’t duplicate. With higher heat, the apple sugars caramelize, the apple flavors concentrate and the juice makes its own sauce. It’s like apple pie without the crust and the apple’s low-calorie, vegan, gluten- and dairy-free and high-fiber advantages remain intact.

Sometimes I roast them sweet with walnuts and cinnamon sugar, and sometimes savory, stuffed with breakfast sausage and green chilies.

Occasionally I just add them to the same roasting pan with chicken thighs, carrots and potatoes to create instant apple sauce chunks.

Baked apples have been a comfort food since there were apples and ovens. A recipe from 1782’s The Practice of Modern Cookery creates a classy sweet shell around the fruit as it bakes:

“Core (the apples) as the last, and fill them with a good marrow cream; baste the outside with the whites of eggs, to make as much fine sugar stick to it as possible; bake them in a slow oven upon the dish you intend for the table and serve them hot or cold.”

If you’ve never made them you only need to know one thing: Baked apples are very, very hard to screw up. It’s a simple, forgiving dish, even if you forget you put the fruit in the oven. I did that and two hours later enjoyed sweet, chewy apple leather along with a pan that was really hard to clean.

To make baked apples, you place cored apples on a glass or metal baking or pie pan, add a little water or other liquid, and bake at 350 degrees. Do not cover. Bake for 60 minutes or so until the apples are tender.

There are as many baked apple variations as there are apple varieties, cooking liquids, fillings and even wrappings.

No Red Delicious!: To make a good baked apple, chose an apple that tastes good, preferably local and organic. Absolutely avoid Red Delicious and other related varieties that are mealy textured and relatively flavorless compared to other apples available in Boulder in the winter. Golden Delicious aren’t much better. On the crisp and tart side are Granny Smith and Pink Lady apples. The crispness means they will need longer in the oven to soften up. On the opposite end are McIntosh, which are so soft they turn into instant applesauce. The best for the Goldilocks spot for taste, sweetness and texture is probably the uber-popular Honey Crisp.

Core curriculum: To prepare the apples, wash and core them. If you don’t have an apple corer or a small melon baller to scoop out the core, carve it out with a small paring knife. Peeling the apples is not recommended because they will fall apart as they bake.

Filling the middle: On the sweet side, apples can be filled with: caramels; walnuts, cinnamon and brown sugar; chopped dates, coconut and vanilla extract; fresh lemon zest and juice with candied ginger; and sugar, butter and pumpkin pie spice. Savory fillings can include breakfast sausage; extra sharp Cheddar cheese; and smoked rib meat and barbecue sauce.

Do you wrap?: To turn a baked apple into a dumpling or mini-pie, take a cooled baked apple with your choice of fillings and wrap the whole fruit in bread dough, pie crust or buttered filo dough sheets. Be sure to cut vents in the top if you completely cover the apple. Bake until beautiful. You can also wrap baked apple slices in oatmeal raisin cookie dough and bake.

Poaching versus baking: Place raw filled or unfilled apples on a pie plate or baking plate and add a liquid to help cook the apple and create a sauce. I’ve added water and juices like pineapple and pomegranate, and some Port wine for the Cheddar-filled version. Grade B maple syrup or wildflower honey is never a bad idea. Adding a little Calvados or apple brandy amplifies the apple-iness.

So, I’ll have to disagree with Ben Franklin when he wrote, “It’s indeed bad to eat apples. It’s better to turn them all into cider.”

In fact, it’s better to bake them.

The fried chicken and folks at Lafayette-born The Post Brewing Co. will be featured Feb. 2 on Guy Fieri’s Diners, Drive-Ins, and Dives on the Food Network. … Happy 40th anniversary to the Brewing Market. The local shops were among the first in Boulder to offer locally roasted beans and espresso drinks, long before the city had a reputable coffee culture and the only hipsters here were aging Beat Generation poets. … The Med Restaurant is celebrating its 25th anniversary this year. I think the location formerly housed Garcia’s of Scottsdale restaurant.

“At our Next Door restaurants, which are designed to be more affordable, you have to baby-step [those customers] into real food. They’re used to eating cheeseburgers all the time, and we want people to eat more healthily and more sustainably. That does mean a salad in January. I would love to pretend that isn’t the case, but it is.” — Kimbal Musk of Boulder’s The Kitchen, at fastcompany.com