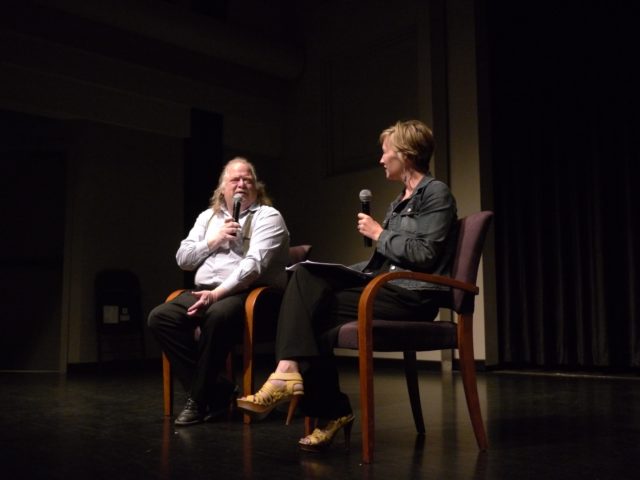 Food writing was not a serious journalism job. When I started working for local publications in the late 1970s in Colorado, stories about dining, cooking, agriculture and food culture were afterthoughts. They weren’t giving out too many food-writing awards back then.

In 1985 when I started writing Nibbles (for the Daily Camera), I was the first male food editor for a Colorado newspaper. That wasn’t surprising, given that the food section was originally called The Women’s Pages. Male editors thought the recipes and tips were just space-fillers around the food ads.

That disdain changed dramatically in the years that followed and now, well, food writing is cool. I always believed food was the most important beat. I could write about everything important in life through the lens of cuisine. There are scores of writers and bloggers across multiple platforms chronicling the every nuance of the food world.

When the late Jonathan Gold became the first food critic to win the Pulitzer Prize for Criticism, I — and a lot of professional culinary scribes — felt legitimized. I had always felt a kinship with Gold, who wrote for the Los Angeles Times, because we were both music critics locked in food editor jobs. I became a food editor because all the music critic jobs were taken, and so I ended up reviewing restaurants and writing about music on the side.

Gold and I also shared an affection for language and a preference for small, family-owned bakeries and take-out joints. And, honestly, we both also looked like your stereotype of a dining critic.

Long before the late Anthony Bourdain made edible journalism cool and shared his love of street food, Gold expressed the romance and dignity of true American fare. He knew that the best food stories are always to be found in tiny restaurants run by immigrants.

I only met him once for a few moments at the Flatirons Food Film Festival in Boulder after a showing of the documentary about him, City of Gold. Gold was suitably rumpled and gracious while surrounded by folks who wanted to share their latest eatery finds with him.

Do your brain and appetite a favor and watch the film. If you want to celebrate his spirit, not to mention Bourdain’s, skip the national chains, the place you always go to, and seek out the hundreds of small eateries in Boulder, Longmont, Denver and Aurora.

Go with friends and order something you normally wouldn’t, ask a lot of questions, and manifest dining bliss. As Jonathan Gold once wrote:

“It’s a waltz-time snack-sip-chat, snack-sip-chat dynamic that can go on for the length of a Mahler symphony… animal-vegetable-mineral, warm-hot-cold, sweet-salt-funk… until, before you know it, the restaurant is empty, the lights have been turned high, and the waitress is suggesting that you might want to start finding your way home.”

This area used to be known as the home of natural foods, herbal tea and craft beer. Soon, we’ll be “the place where they make all the Uncrustables.” The J.M. Smucker Company has opened a new, 430,000-square-foot factory in Longmont solely to make Smucker’s Uncrustables frozen sandwiches, 2 million a day. That’s a flood of squishy white bread, sweet grape jelly and peanut butter heading to Longmont, and 2 million sandwiches a day going out to homes across America. The factory opening creates 200 decent jobs but raises some questions.

Since every sandwich is imaged and checked for “unwanted crust or excess fillings,” that means there is a ton of food waste every day. What do they do with all the crusts they cut off: Feed livestock, compost them or provide “seconds” that can feed students at local schools?

Why this aversion to bread crust, arguably the best part of a great loaf of bread?

I understand the time crunch on busy parents but I wonder why Uncrustables exist since it only takes the better part of a minute to make a PB&J sandwich.

To make your own better Uncrustables, start with slices of really good soft bread. Spread both sides with quality nut butter and plop some favorite jam in the middle, and trim it using a thin metal cookie or biscuit cutter and press the edges. Stores like McGuckin Hardware offer an array of cutter shapes from guitars to locomotives. Then freeze them for later.

The Hygiene Hay Days Pie Contest is Saturday in the little town of Hygiene near Longmont. I’ll be heading up the pie judge contingent so be sure to enter your favorite summer fruit pie with flaky crust. … Flatirons Food Film Festival hosts a screening and discussion on the CU-Boulder campus Aug. 28 for Modified, a documentary on the spread of GMOs in the United States and Canada. Free tickets with registration at flatironsfoodfilmfest.org  … The latest addition to the local produce sellers at the Lafayette Farmers Market is Micro Farms, a collection of tiny farms that are cultivated using backyards and lawns in the Denver area.

It made sense that the Wallaby Organic Strawberry Red Wine Aussie Creme Yogurt would be on the sale shelf marked down to 39 cents. It was a flavor bridge too far for most yogurt consumers, so I had to taste it. There is no “wine” in the yogurt, just non-alcoholic “natural flavor.” It was actually pretty tasty, like a dessert wine or the classic Italian dessert of sweet balsamic vinegar syrup over vanilla gelato.

“I was eager to do the cooking so that those better qualified might have more time to talk about the cooking,” —Mollie O’Neill

John Lehndorff is the former Chief Judge of the National Pie Championship. He hosts Radio Nibbles at 8:25 a.m. Thursdays on KGNU (88.5 FM, kgnu.org).