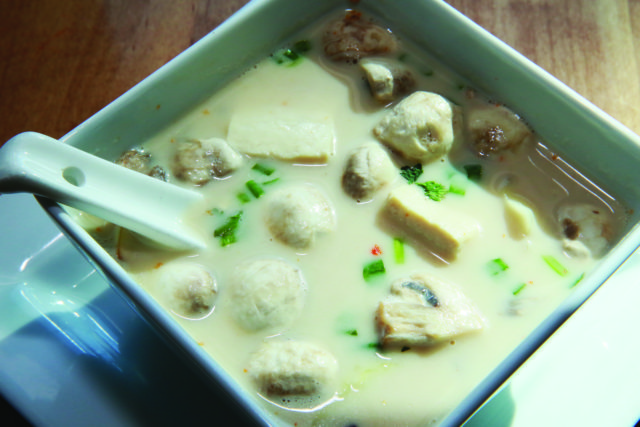 At some point in John Steinbeck’s novel East of Eden, Samuel Hamilton comes down with a hallucination-inducing fever that puts him out of commission for a few days. His son, Tom, brings his father chicken soup “until he wanted to kill him.”

“The lore has not died out of the world, and you will still find people who believe that soup will cure any hurt or illness and is no bad thing to have for the funeral either,” the narrator concludes.

The healing power of soup is lore that still resonates in contemporary society — just look at the popularity of bone broth.

But I’m here to posit that soup is more than just a dish to vanquish the common cold. It’s more than a hodge-podge of leftovers and spices, more than what you eat when “there’s nothing to eat” in the house, and more than the choice you make when you don’t want salad with your meal.

Soup can be the highlight of a meal, and damn it, it can be the meal itself.

Tom kha soup, a staple of Thai cuisine, is one of these standalone soups, and Busaba in Louisville serves up a star example.

Spicy and sour, creamy and hearty, tom kha will accommodate for any kind of protein, but it’s traditionally made with chicken. (I opted for tofu on my last visit to Busaba, but this is unlikely a purely vegetarian option as the base of the soup is often chicken broth.)

Busaba keeps their tom kha classic, with cabbage, mushrooms and red onion simmered into a mixture of broth and coconut milk, garnished with chopped green onion and cilantro. And just beneath the surface of the creamy liquid’s light coconut flavor are hints of lime, coriander, ginger (or perhaps galangal, an Indonesian member of the ginger family), lemongrass and the subtle spice of chili peppers, creating a soup that is at once refreshing and soothing. The spice of the chilies is tempered by the coconut milk, and the coconut milk is thinned by the broth. It is a balancing act that plays out on your taste buds, working in each of the five basic tastes in the subtlest of ways.

Add some chicken, if that’s in your diet, and you’ve got yourself a soup that is far more satisfying than most basic chicken noodle soups, and healthier than other cream-based soups like chowder.

Even if you don’t make the tom kha soup at Busaba your whole meal, it won’t blend into the back ground of the meal (love you, miso, but I’m looking at you). Tom kha is a soup made to stand out, or stand alone, and leave you feeling satisfied, even if your plan is to dive into a bowl of curry or noodles.

Perhaps it’s not such a bad thing that folks still believe in the power of soup. Even if you don’t, believe in its power as a meal.