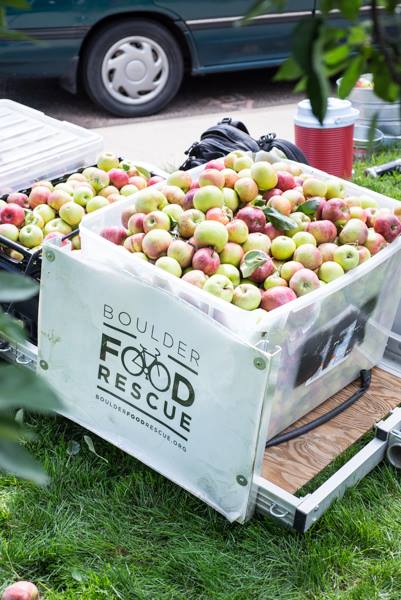 Last year’s late spring frost and punishing fall floods certainly had one upside: it’s been a hell of a year for apples.

On every street there seems to be at least one tree laden with branches bowed down with ripening fruit. Sauces, cider, pies and cobblers — it’s been hard for homeowners to use them all and many, overwhelmed with the volume, simply haven’t been able to organize their harvest. Riding to their rescue with bushels attached to bikes comes the Boulder Fruit Rescue. Rather than see the food go to waste rolling into lawns and gutters, the newly formed organization has developed a scheme to help both homeowners and the hungry benefit from this years’ bountiful harvest with the help of volunteer harvesters.

“Boulder used to be an orchard,” explains Micah Parkin, executive director of 350 Colorado, an organization working toward creative local solutions to combat climate change that helped form the Boulder Fruit Rescue. Street names like Orchard Creek, Cherryvale and Apple Way are a reminder of Boulder’s fruited past. “There are liter ally hundreds of fruit trees and many homeowners have already eaten their fill.”

Her organization, along with Falling Fruit, a nonprofit based in Boulder around urban harvesting, had been meeting as part of the county’s new Edible Landscapes Workgroup to discuss ways to increase the amount of local food available in urban environments. Faced with this year’s bumper crop and supplied with connections to Boulder Food Rescue, which donates food otherwise wasted to organizations such as the Emergency Family Assistance Association and Harvest of Hope, the group founded the Boulder Fruit Rescue to help connect homeowners and volunteer harvesters.

Much like the quantity of fruit this year, the response was overwhelming.

“Hundreds of people registered and at the very first event, we realized we would be overwhelmed,” explained Parkin, whose solution was to create a toolkit and designate neighborhood organizers based on zip codes. With over 50 volunteer organizers, the fruit harvests were set up for Sunday afternoons, with volunteers meeting at registered trees where they picked. The unique model the group developed had one-third of the harvest going to the homeowners, one-third to the harvesters themselves, and the remaining third to Boulder Food Rescue or Boulder Valley School District. Some of the volunteers included folks interested in canning and putting away fruit for the winter. There were several active members of the Boulder Bear Coalition as well, who helped out to discourage bears from coming onto properties to feast on the fallen fruit, putting them (and homeowners) in danger.

“A lot of folks who came to harvest didn’t really take much fruit. They were more interested in the community aspect of the event,” said Parkin.

Wrapping up in October, Boulder Fruit Rescue volunteers were amazed at the response and volume of food collected that might have otherwise gone to waste. Volunteers estimated that over 10,000 pounds of fruit was harvested from local trees around the county, with about 6,000 pounds of that being donated.

This concept of “gleaning,” the act of collecting leftover crops from a field, is an old one, and stories of its practice can be found in the Old Testament and ancient texts. Many see it as a great way to reduce food waste while increasing the amount of locally grown food that does not have to consume fossil fuels for its transportation.

“There were no temperatures below 28 degrees during the period when apple trees were blooming and ample rainfall to pump plenty of water into ripening fruit,” Reich says. He also credits the cooler summer temperatures for slowing the reproductive rate of the codling moth, a common pest of apples, and a nice warm fall for allowing apples plenty of time to ripen. When asked if we were likely to see this level of harvest again soon, Reich explained that with appropriate management (including irrigation and fertilizer) and cultivar selection, people in the lower elevation portions of Boulder County should be able to get very good apple crops in 4 out of 5 years. “The big difference this year was that, even for folks who have ‘inappropriate’ cultivars or who do not irrigate regularly, Mother Nature made up for their shortcomings with some really favorable conditions.”

While it may be hard to predict when Boulder will have another windfall fruit year, the Boulder Fruit Rescue is spending this month debriefing on ways to make next year just as bountiful. Finding a commercial kitchen to preserve more of the fruit and finding funds to support a staff member to help coordinate all the harvests and donations will keep the volunteers busy through the winter. “We have more applesauce, dried apples and preserves than I could have ever imaged,” laughs Parkin. “And that’s just great!”