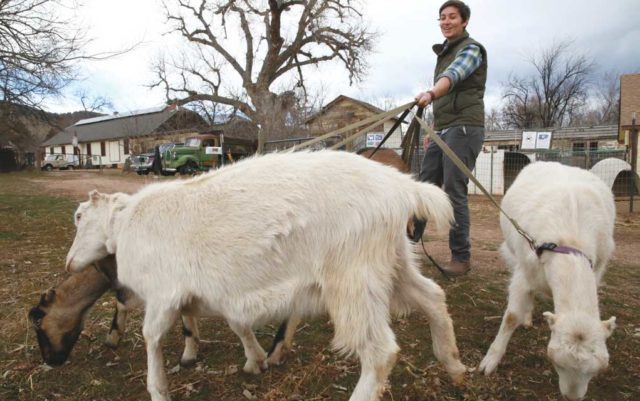 As an infant, Kallie Beebe was weaned on goat’s milk. Her parents would have to research places that sold goat’s milk when they went on family trips to be sure they’d have a source. Sometimes the milk was raw and unpasteurized. Beebe admits, “My dad probably gave me some dodgy stuff at some point.”

Then by age two, for all intents and purposes, Beebe was done with goats. And their milk. That is, until about 25 years later, when she and her partner moved to Boulder and, while walking to her nannying gig one morning, Beebe passed Mountain Flower Goat Dairy.

“I’m like semi-woo-woo. I’m not full woo-woo,” Beebe says, “but there was this poignant moment the first time I saw [the dairy] where I had this sense that something was there. It’s a sense I’ve felt a lot in my life where nothing’s come of it so I thought I was being this drama queen making up my own movie in my head. But there was a part of me that knew I would do something here.”

Beebe filled out an application and remembers, “really wanting people to know this is so deep in my roots. … [Goat’s milk] is what gave me life in some ways.”

Lo, she got a job as a farm hand and quickly moved her way up to executive director. Now she oversees the operations of the 17-goat dairy, runs classes on the farm, manages some finances and more.

But you may not need the dark science of woo-wooism to explain how Beebe ended up managing a small goat farm in Boulder. For the sociology major from Santa Cruz who says, “most of my childhood friends were dogs,” goat farming makes a lot of sense. Goats “are social, emotional creatures,” Beebe says, and studying their peculiarities surely presents the opportunity to inform us of something about human nature.

“Oh definitely,” Beebe says. She would know, right? “But then that’s where you have to be careful with comparing animals to humans. Yes, by definition, humans are animals … [but] we can justify some rough stuff that I think humans do to other humans that at this point we don’t have an excuse to be doing anymore because we’re not being hunted. We’re not constantly running for survival. Animals can justify those behaviors because they’re whole life is trying to stay alive.”

Beebe laughs. “I can get really intense right now,” she says. “I’m not going to.” 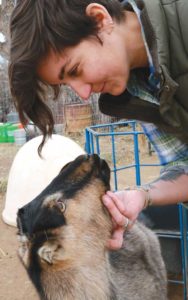 It sounds odd, but it takes someone who cares about people to be a good animal farmer. Beebe’s passion for working with people led her initially to study sociology in college, even if she had to spend “half of those years defending my choice of sociology.” But she says elements of sociology — how society works, diversity, identity — should be a part of every curriculum.

“It shouldn’t be a major to understand how your society works and delve into why certain labels don’t work for people,” Beebe says.

A little sociological education, at every level of learning, could go a long way, Beebe says. It wasn’t until she went to community college before attending San Francisco State that she heard about the concept of white privilege, and questioned how even though Santa Cruz proudly promoted diversity, did it really do enough to foster and attract those diverse communities?

When she went on a walkabout after college, twice working on a farm in Costa Rica, she learned for the first time what it’s like to be “the different one.” Being white was different for once, but also being openly gay in small-town Costa Rica presented opportunities for cultural and personal study; she found herself not wanting to make locals feel uncomfortable “because [sexual preference] wasn’t something they were used to talking about.”

“There’s not a language for it that there is in San Francisco, where I came from,” she says.

After hearing one gay joke too many — similar to the kind someone might say here that equates something being gay to something being stupid or broken — Beebe remembers telling some local community members that she was gay and that that kind of language hurts an entire of group of people. “And it was this mind-blowing thing,” for both parties, Beebe says, because they’d never heard it, and she’d never been one to say it.

That commonplace type of human ignorance and indifference might make you look at goat culture and think there are parallels. Two goats can cuddle together one night, and if a goat is sick the next day, the whole herd will stay away for fear of being attractive to predators. Goats live in a hierarchical society, so they’re constantly jockeying for power. In short, goats put themselves above others when the chips are down. That’s not so different from a cynical view of humanity.

But no, it’s neither easy nor wise to compare goats with humans, Beebe maintains. Our inputs, communities and mental faculties are not the same. But using goat communities as a simple reference point can provide lessons for people.

“The reasons goats act the way they act is for their survival, whereas I think humans miseducate themselves or decide to feel certain ways because they saw something on the news that told them this is how they should feel about this. Animals just have their intuition; they’re not reading the paper deciding how they feel about things.”

And lest you forget that, or don’t have the wherewithal to intuit it while you’re in downward dog between a bunch of goats, Beebe says the act of raising goats physically pulls you from the forces that tend to drive humans apart.

“It’s a reactive culture we have now,” Beebe says. “Instead of seeing something and experiencing those feelings and just sitting with that and saying, ‘Woah, that feels really uncomfortable for me right now,’ we feel like we have to get online and tweet about it. … Our culture now is really promoting, ‘What are you gonna say about it now,’ or, ‘You better figure out how you feel about it, otherwise someone else is going to tell you how to feel about it.’

“Which is why farming is great, because during the day you’re not worried about that. You’re not on your phone, you’re not on the computer. You’re getting back in touch with something that exists in all of us. Our ancestors didn’t have Twitter.” 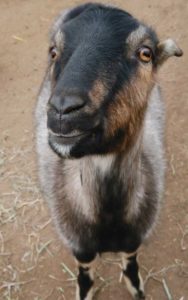 But for those of us who can’t or won’t take up the farming life, Beebe says just interacting with goats can provide value. Consider goat yoga, which Mountain Flower and other goat farms offer. It is what it sounds like — goats hang out while you do yoga. Sometimes they’ll nudge your feet, or hop on your back, or lay down in front of you. Like you might be right now, Beebe says, “I was skeptical at first.” But, she says, “Seeing how goats bring people out of their shells with their playfulness, they get people to take themselves in a less serious manner.”

But Beebe’s ultimate perspective is balanced: Goats don’t have all the answers, and humans aren’t all bad. And sometimes the nexus between those two worlds is great: chèvre, goat yoga and yes, even funny social media posts.

“I Instagram a ton of goat photos, don’t get me wrong,” Beebe says.