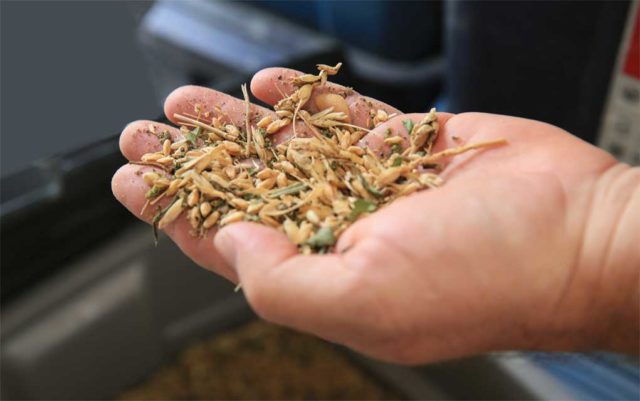 I know that’s heresy in Boulder County, where quinoa is more common on menus than cheeseburgers.

I loathe quinoa’s squishy, rubbery texture, its odd flavor and lack of aroma. Over the years I’ve eaten and cooked my fill in myriad preparations, and I’d be delighted to never put quinoa in my mouth again. If I’m being honest, I think people eat quinoa because it’s good for them, not because they love quinoa. Enough already.

Besides, quinoa is a seed, not a whole grain, with a natural coating of bitter saponin to scare off birds. It is sold rinsed and you can rinse it some more before cooking but there’s always a trace of it that affects the taste.

I know all about the nutritional pluses of quinoa. I know it takes on the flavor of ingredients and seasonings. It’s not worth it. There are other, tastier ways to get the protein, fiber, vitamins, carbs and calories — with or without gluten.

Quinoa has no magical, mystical powers. I’ve written about Boulder County food since the Tassajara/Moosewood Hippie era of the late ’70s and seen plenty of magical, mystical foods come and go. See kale for details.

Whole and ancient grains are suddenly the hottest ingredients again for the same, good health and taste advantages they’ve always had. At our County’s eateries they always seem to come in bowls, not plated, and no one is certain why. They are popping up in fried “rice” and salads, cooked like risotto or paella, and added to yeasted breads and desserts.

I love whole grains and cook them in sweet (breakfast) form and savory variations. There are a lot of other tastes and textures beyond the blandness of brown rice, oats and quinoa. I’ve become a fan of certain alterative grains — farro, barley, freekeh and millet.

My current favorite is farro, an ancient form of spelt. It’s wheat, but with less gluten, and it cooks up like chewy rice with a nutty taste. Barley adds a nice chew as a whole grain. I keep a box of quick barley around because it’s easy to use in soups or porridge.

As much fun to eat as it is to say, freekeh is roasted, cracked green whole wheat. It boasts the same earthy, nutty, chewy appeal as bulgur, the wheat used in Middle Eastern tabbouleh salad.

These days most millet is found in bird seed, but the little, round, yellow, couscous-like grain is a nice addition to other grains. It’s got more texture than flavor, and it’s even better when toasted first.

If you cook and store batches of these grains separately, it’s easy to combine a few different ones into a dish, whether it’s roast chicken stuffing or mango coconut sticky grains.

There are two approaches to cooking grains. A rice steamer or hot pot is probably the easiest way to prepare farro, barley, freekeh and other grains. You find out after one batch whether you need to add more water if they are too chewy or  mushy. I go for a substantial chew.

The beauty of any of these organic grains is that they are really cheap. The grain in Panera Bread’s pricey, popular Warm Grain Bowl costs maybe 10 cents. You can experiment with them and, if a batch comes out mushier or crunchier than you like, it’s not a major investment.

The other way to cook grains is to boil them in a lot of salted water in a big pot, the way you do for macaroni. You taste grains along the way until done and then strain. This is the best way to cook farro and keep the grains separate. I also cook grains like farro in the oven, substituting various broths — chicken, veggie, bone, pho and ramen — or even coconut water.

Batches of grains should be chilled rapidly to stop them from further cooking. Consider freezing cooked farro, freekeh and barley. Spread on a cookie sheet and store in a bag for those nights when you don’t have time — or the will — to cook. Frozen, pre-cooked organic grains are available but the cost for that convenience is fairly obscene.

Note: Boiling barley or amaranth at altitude in Ward takes a lot longer than in Erie.

Coma Mexican Grill has opened at 4800 Baseline Road. … You’ll be disappointed if you wait until the last minute to make reservations for some of the 40-plus local eateries offering fixed-price deals during First Bite: Boulder County Restaurant Week (Nov. 8-16). firstbiteboulder.com … Now is the time to visit the farmers’ markets and farm stands and fill your pantry with locally grown “keepers” that can hang out for months in a cool, dry place. Grab local apples, beets, carrots, kohlrabi, garlic, parsnips, potatoes, onions, sweet potatoes and winter squash. … Happy 40th anniversary to the no-frills Mountain People’s Co-op in Nederland, a natural foods, volunteer-staffed pioneer organization that’s still open seven days a week.

Denver’s White Pie (1702 Humboldt St.) produces an absolutely genuine taste of my central New England homeland. Their New Haven-style pizza baked directly on the wood-burning oven stone boasts a nicely charred, irregularly shaped crust that would be a treat all by itself. The signature White Pie is pizza art crowned with mozzarella, garlic, creme fraiche, cremini mushrooms, bacon and a sunny side up egg.

“The mostly white, mostly male, mostly thin food writers and chefs who have been setting the agenda of what they call the ‘good food movement’ for the past couple of decades … (have) turned being thin — and eating in the labor-intensive way they think guarantees thinness — into a moral imperative.” — Virginia Sole-Smith