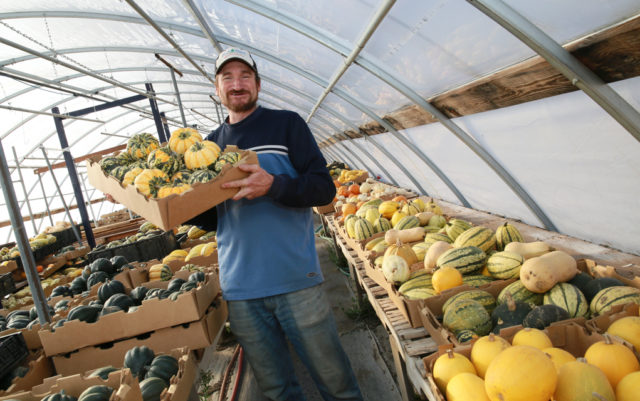 Now is an important time in agriculture. It’s been said, perhaps best by renowned food writer Mark Bittman, that to care about food now is to care about the future of the country. Food impacts everyone, and it impacts every issue from immigration to climate change to livable wages and more. And, it all starts on the farm.

Mark Guttridge of Ollin Farms knows this. If you’re not tuned in, his fast and twangy manner of speaking obscures the hard science of biodynamic agriculture that he effortlessly reels off; the astute observations and opinions on local farming regulations; and the mindfulness of sustainable agriculture’s intimate connection to nature.

Guttridge, too, thinks world salvation starts on the farm. Maybe on a local farm. Maybe his.

“I think there’s a new paradigm of agriculture coming, and I hope it can be born here in Boulder County,” he says.

Just over a decade ago, Guttridge and his wife, Kena, moved to the land just south of Longmont that would become Ollin Farms while his grandmother, who owned the land, battled Alzheimer’s. Guttridge had received a master’s degree in water resource management from CU, and was beginning work in the field. Though the farm had never produced crops, Guttridge began to garden in the backyard, and when friends and family tried the fruits of his labor, they were impressed. So was he.

“I thought I had eaten tomatoes but these things were freaking awesome,” he says. “As a scientist, I just started to get really curious about it, wondering how I went through all these years of higher education and never had any idea where my food was coming from, or the nutritional quality of food, or how the food system was set up.

“I realized it wasn’t just about having food for my family,” he says. “I really wanted to provide for the whole community; there really was a need for nutrient-dense food grown in healthy soils.”

Guttridge worked (and still works) as an environmental consultant, a paycheck that helped his family launch and sustain the farm it its first years. But his scientific background also provided a technical foundation upon which the farm could grow — for instance, one of the reasons they even started gardening was because Guttridge wanted to test out a drip irrigation system he was learning about in his graduate studies.

It also instilled in him a curiosity to find out how to maximize land to improve the lives of people. Seeing his grandmother battle Alzheimer’s and a friend undergo cancer treatments, Guttridge sought to explore from day one how what we eat (and how it was raised) impacts our bodies.

“I’ve never had any conversation about nutrition with my doctor. It’s always about this symptom and this treatment, and it got really frustrating for me,” Guttridge says. “So I had to define myself as a farmer, like, ‘How am I going to grow the most healthy, nutrient-dense food possible?’ I did a lot of research and networked with a lot of farmers and ended up finding out really it’s about physically growing a healthy, active topsoil.”

This is the movement in farming, and the crux of Guttridge’s mission (very much simplified): nurture the land and it’ll reward you. This starts by looking at how the land has historically been used, understanding its true nature.

“What was this area before it was the Front Range?” Guttridge asks. “It was prairie grasses, and twice a year the buffalo would come in, they’d eat the grasses, they’d shit, they’d die, they’d move on, and the grasses would rejuvenate without a lot of water. Even over time we were able to build a layer of topsoil. How can we take that and put it on a small farm?”

Cultivating topsoil has myriad benefits, Guttridge says. It sequesters carbon, first of all — there’s a “cool feedback system,” wherein the plant, via photosynthesis, takes in carbon, passes it through the roots and into the soil. Microbes in a healthy soil, then, breath out carbon dioxide, which the plant takes back in to compensate for its “loss.” In order to make this model of “regenerative agriculture” (about which a conference is to be held in Boulder next month) work, farms must grow some kind of crop throughout the year (to retain the cycle’s CO2), and mustn’t till the land (which would release the carbon). So Guttridge plants winter wheat, berry bushes and more to serve that purpose.

That’s all important because Guttridge says most farms don’t plant such cover crops, thus carbon is released in mass quantities during the offseason.

“If you have a healthy plant, you don’t need fungicides and herbicides and pesticides because the plant has its own immune system,” he says. “A lot of those bugs and diseases are there because that’s nature’s way of taking out the weakest link. That’s what they’re there for in nature: to eat the stuff that’s sick. And in all our genius, in the last 50 years, we designed all these chemicals to keep the sick plants from being eaten by the things that are supposed to eat them and then we eat that stuff and then wonder why our healthcare system is the way it is.”

But there’s also a poetic reason to support regenerative farming initiatives, Guttridge says. The care and intention needed to cultivate healthy topsoil and nutrient-dense crops are passed from the farmer to the crop itself, he says.

“There’s nutrition in food but there’s also these subtle energies. When we’re doing it by hand, I think [these energies] come from our intention, and… it’s really important when you’re getting beautiful food in from a beautiful farm that people are happy to be working there. That’s what we want to make available in the community.”

Now if you think it’s a done deal that Boulder County will become the sustainable agriculture center of the world, think again. Guttridge points out the fact that 80 percent of farmers who started farming via a County open space program went out of business within a few years. Too, there are real limitations on the small sustainable farm model — they’re up against “a global food system that’s really pushed cheap, low-value food, and it takes a while to educate why things might cost a little more.” And just this week, the Boulder County Commissioners ended a sustainable agriculture research program amid controversy on how best to (and who should) implement a transition to non-GMO crops.

Labor costs are prohibitive as well, and so Guttridge has diversified his on-farm income, including hosting educational and social events. Galvanizing a section of the community to help with on-farm work is a new project Guttridge and other farmers are working on, with the hopes of getting up to 50 or so people out to, for instance, move fences for rotational grazing, or move heavy winter squash in cold weather in exchange for, say, a CSA share.

So, OK, maybe it’s a long road between here and a moment when regenerative agriculture saves the world and Boulder County farmers beam with pride from their hay pedestals. But Guttridge, at least, is prepared for the journey ahead because the answer is all around us if we keep our eyes open.