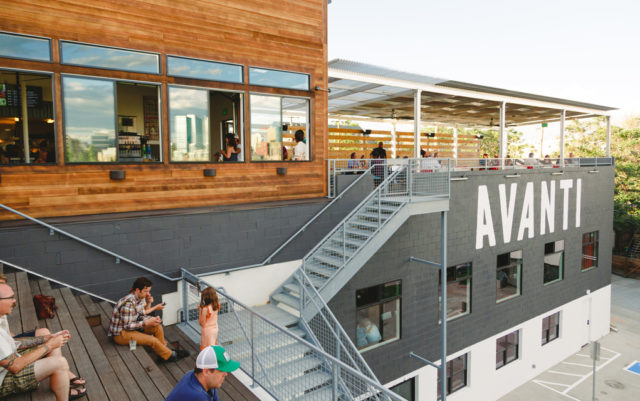 Thanks, Cheesecake Factory, for all the memories, but it’s hard not to be excited about Denver’s Avanti Food & Beverage food hall opening a second location in the Factory’s prime former spot on Pearl Street. At a time when Boulder’s downtown is being maligned for high rents that squeeze out locals, it’s refreshing to hear a local food enterprise can still afford to come in, and that Avanti’s co-founder, Patrick O’Neill, is planning to relocate to Boulder with his family to make sure the change sticks.

But the good news about Avanti isn’t just that it’s a small business making it work in Boulder, it’s what the food hall means for Boulder County’s dining scene. Food halls have been cropping up across the country for the last decade, and it’s high time we have a place that allows restaurateurs to grow their businesses without the do-or-die commitment of a stand-alone brick-and-mortar shop, or else make them withstand the topsy-turvy world of food trucks.

“Our team did pretty extensive research and wanted to stick to Colorado rather than expand out-of-state. We strongly feel Boulder was our best bet for successful expansion,” O’Neill says. “My wife was born and raised in Boulder, I went to CU, my brother and his family live in Boulder; we spend and have spent a lot of time there and have witnessed Boulder’s growth first-hand.”

Avanti will offer six stalls for a rotating group of restaurateurs. They supplement that with two bars, and a spot for coffee and pastries. Tenants sign a one- or two-year lease at the spot, and if Boulder’s location is anything like Avanti’s first venture in Denver, tenants will have earned enough cash and good will during their leases to open brick-and-mortar restaurants or otherwise grow their businesses elsewhere.

“It’s all about testing things out in a supportive environment,” he says. “We offer our tenants lots of resources and a solid platform to introduce their concepts and build their businesses.  Concepts have the flexibility to change up menu items, pricing and marketing tactics while under the Avanti umbrella, unlike a brick-and-mortar location, where things are a bit more set in stone.”

O’Neill himself has built and sold several restaurants and bars over the years, and saw directly that, sometimes, all a good up-and-coming chef needs is a chance to break into the industry without having to plunk down their life savings.

“There are so many great ideas and restaurant concepts out there that don’t see the light of day due to barriers of entry,” O’Neill says.

Food halls have boomed recently because they ensure both a good dining environment and an eclectic array of food — there are some that offer single-cuisine booths of different fare (think an Asian market with one stall for pho, one for bao buns, one for sushi, etc.), and those that, cumulatively, provide a global offering. Despite the bevy of examples in bigger cities, where food halls have taken root, O’Neill says he and his partners “wanted to create an original experience, to create something different and unique,” and so they didn’t go on a tour of the country to see how other food halls are getting it done.

O’Neill says Avanti will “try hard” to showcase Boulder talent — they are currently accepting applications for tenants to fill out the stalls. One focus will be to use the space to bring in cuisine and food makers that have eluded Boulder.

“We aim to pick concepts that fill gaps in the local dining scene as well as satisfy diners’ day-to-day cravings,” O’Neill says.

O’Neill says the one- to two-year lease structure ensures that Avanti will be able to “keep the dining experience fresh while also giving new and up-and-coming chefs and restaurateurs enough time to test out their ideas and bring their culinary visions to life, while staying on the forefront of restaurant trends.”

After working with tenants at Avanti’s Denver location, O’Neill says the success or failure won’t impact Avanti’s bottom line — their vetting process to get people in the door (and we’re sure there will be plenty of applicants) is designed to keep the quality high. Still, because there are minimal up-front costs, Avanti offers a unique chance for restaurateurs to grow, regardless of what the food hall launches them onto.

“Sometimes the concepts are ready for a brick-and-mortar at a year and other times they realize they need to make some changes to their concept in order to work as a stand-alone business,” O’Neill says. “I think a tenant’s ‘success’ is subjective to the tenant; not every tenant in-house will be the leader in revenue, but the ability to work out systems, recipes, execution and building a fan base is invaluable.”

The 13,000 square feet of Avanti Boulder will feature a rooftop deck and modern design and décor. The plan is to open in late 2019.