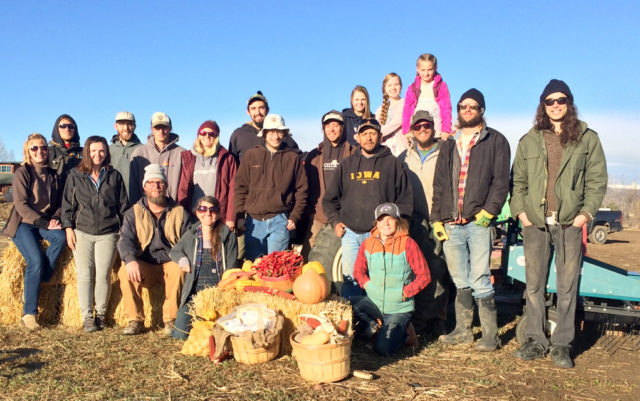 In one small corner of the 100 acres in Longmont and Niwot that comprise Aspen Moon Farm, there is a tent made of a metal frame and an opaque plastic tarp. Inside, Erin Dreistadt turns on a large heater, which is helping a tabletop of seeds begin their early-season growth.

Underneath the table is what Dreistadt calls a makeshift germ chamber, where celery seeds are germinating in a hot, moist and dark environment tenderly created just for them.

“It took us three years to figure out how to grow good celery,” Dreistadt says. Then she points to a stack of purple and pink sleeping bags on a tower of crates outside the shed. It turns out growing good celery requires nightly care just short of reading it a bedtime story.

“Celery has its own temperature range that it requires, and it’s really hard to get these tiny, little seeds to germinate,” Dreistadt says. Recently when nights dropped below what the seeds could tolerate, Dreistadt “tucked them in with down sleeping bags every night to get the proper temperature.”

It’s that attention to detail and care that separates Aspen Moon from conventional crop producers. Dreistadt and her husband, Jason Griffith, are self-proclaimed “shepherds” of the 100 acres they manage in Boulder County, only cultivating about 25 of them in order to maintain a healthy greater ecosystem. Espousing biodynamic farming, which incorporates cosmic and holistic considerations to a largely organic and sustainable method of agriculture, Aspen Moon produces a wide variety of rare and conventional crops. In layman’s terms, crops are planted, picked and rotated according to an astrological calendar using animals and techniques that promote the codependence that exists naturally between soil, plant and sky.

Dreistadt recognizes that concept might sound foreign to people only exposed to “mainstream” agriculture.

“We know that the sky and plants are connected, right? That’s old information, right?” Dreistadt says. “I mean it is one of those things that you could research and go either direction on it. You’ll get a lot of naysayers, but we really love it, and we see the effects. The farmers we’ve learned from, just hearing their stories of how this works, that’s just had a big impact on us. … People can see and feel and taste the difference in biodynamic food… or some people can. People who want to, I guess.”

The proof of the efficacy of their methods is in the proverbial pudding. Take the well-raised celery, a crop so cheap and abundant in traditional grocery stores that we not only take it for granted, but often settle for less than what it can be.

“I love our celery. It’s so delicious, and we’re so proud of it, and it’s funny because people are like, ‘Celery? OK.’ It’s so cheap at the grocery store, but farm celery versus grocery store celery I feel like is so different. Our celery has such good flavor,” Dreistadt says.

What you’ll also notice if you visit Aspen Moon’s booths at the Boulder County Farmers Markets is not only the quality of its food, but the diversity of crops. For instance, late last year, Aspen Moon was selling multiple varieties of carrots of all different colors, about as big and veiny as an arm wrestler’s forearm. That’s not just for novelty, Dreistadt says. There’s value in promoting strains of crops long forgotten about.

“We’re really drawn to different varieties that aren’t conventional,” she says. “Historically, there is a ton of diversity in crops, and you’re going to get more flavor and different nutrition [from them]. There is a lot of information out there about how the crops that have just been one variety grown over and over and over again, [that have been] selected out for shelf-life or travel, that look the most uniform, often [don’t have] the highest nutrition and the best flavor. We’re kind of looking for the opposite.”

Given the abundance and quality of their produce, it’s remarkable to think Aspen Moon started just less than a decade ago. Dreistadt and Griffith began with a small garden on their Longmont property as a way to ensure their kids were eating well. That led to trips to the Farmers Market, where one parent sold produce while the other watched the kids; leaving with a couple hundred bucks on a Saturday was a good day in the early going.

But Aspen Moon grew rapidly, thanks in part to Griffith keeping a landscaping job to supplement the farm’s income. Dreistadt says it wasn’t until six or seven years in that the farm started making more than the landscaping business, which is when they switched all their efforts to Aspen Moon.

What that move has enabled them to do is dive into different crops and ways to serve the community. Last year was the first time they grew heritage wheat, milling it and selling whole-wheat flour.

“There’s a whole movement around local grains,” Dreistadt says. “Wheat is one of our biggest crops historically and still is and fills us up, but it’s not providing the nutrition it used to, and that’s why people are having trouble digesting it these days. It’s just one variety that’s been degraded and degraded. It’s lost its nutritional value.

Bringing wheat to market required Aspen Moon to purchase a seed cleaner, which takes the wheat strands and separates the berries from the fronds. That cost, in some ways, is passed on to the consumer, which is added to the cost of the time it took to learn how to grow, harvest and mill the wheat. It’s a trade-off that Boulder County consumers seem to be willing to make… most of the time, at least.

“We still get the customers who gawk at our prices but at the same time, we really try to not out-price our community,” Dreistadt says. “We just have to find that balance. Sometimes … we have a new crop and it took us a whole bunch of work to make it happen, to get it to market, and we realize we really need to charge a lot because we spent a ton of labor on this, and the community’s like, ‘We really can’t pay that much for that.’”

If you want to plant and raise the unique crops Aspen Moon will be growing this year, they will be selling starter plants for folks to grow on their own.

For Dreistadt and Griffith, and their team of farm hands, crew leaders and interns, which will grow to about 25 people at peak season, the work is just beginning. It might be easy to mistake the sight of a couple white labs playfully wrangling a small herd of sheep on a misty morning, or a portrait-perfect shot of Longs Peak above a field of early-season salad greens as indicators of an idyllic life. But the work is hard, and it’s only the reward of serving the community that makes it worth it.

“It’s hard to feel the romantic side, honestly,” Dreistadt says. “I love what I do and really think that’s part of why we’re so Farmers Market-focused. We need the customers to be telling us they appreciate it. That feeds us to feed them.”