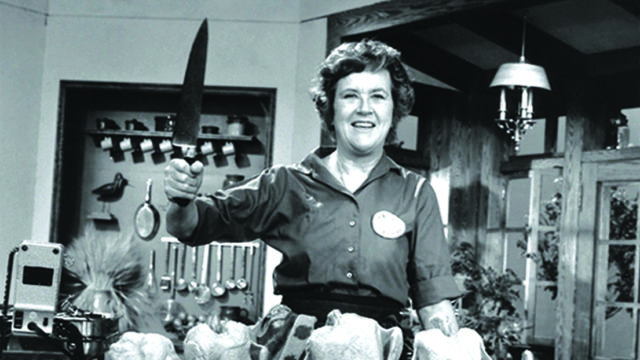 I can’t say I knew Julia Child well but I can do a fairly good “Joooo-leeeee-ahhh.” I grew up with her as a presence on the family’s black-and-white Zenith hosting this funny French cooking show on educational TV.

I knew Dan Ackroyd’s bloody Saturday Night Live impersonation of Julia Child by heart-—a sketch she apparently absolutely loved. She was already a legend when I met her at a press lunch in Denver as a Boulder food editor. It was like having an audience with the Pope.

In person, “The French Chef” looked and sounded exactly like her TV persona … only much taller and funnier. She seemed very foreign for someone so thoroughly American. Maybe it was her first job as an intelligence operative. Gazing in her eyes while I asked stupid questions, I had the distinct impression that Julia was flirting with me. Then again, I think she exuded that charm on just about everyone.

Aspen’s Food & Wine Classic is now an always-sold-out, hyper-expensive culinary who’s who gathering. When the event started, Aspen was not on any culinary map and Colorado was a place to fly over, not dine in. Julia Child and Jacques Pepin helped change all that as Aspen brought more attention to the state and to Colorado’s considerable and growing food assets.

In her later years I’d see Julia—tall and stooped—shuffling through hotel lobbies on the way to cooking demonstrations. The awed crowd parted for this seemingly frail elderly woman.

After being helped onstage she straightened up and transformed into “Julia!” Whether wielding a knife or a chicken, she exuded oodles of infectious energy and an appetite for butter. And yes, every time she finished, she issued that iconic high-pitched “Bon appétit!” and left the stage to meet fans.

The more I find out about this fascinating woman, the more I realize how much I don’t know. That’s why I’m looking forward to seeing Julia, a new documentary produced by Ron Howard and Brian Grazer. The film shows March 5 at Boulder High School as part of the 2022 Boulder International Film Festival (biff1.com).

The event is followed by a Boulder showing of Blind Ambition, a documentary about Zimbabwean refugees vying to become South Africa’s top sommeliers.

Other films showing March 3-6 at BIFF include:

• Nordic by Nature about a Michelin-starred eatery on the Faroe Islands between Scotland and Iceland. Preceded by: Tanagokoro: A Culinary Portrait, a short documentary about a Japanese chef in London.

• Song for Cesar, about Cesar Chavez, and The Seeds of Vandana Shiva, both focus on global food justice.

The last time I saw Julia Child before she retired, I did something I almost never do as a journalist. I asked for an autograph. She looked at me and asked who the signature was for. “It’s for me, John,” I said, blushing profusely. I still cherish the reporter’s notebook with the inscription: “For John, Julia Child” on the cover.

“It’s so beautifully arranged on the plate, you know someone’s fingers have been all over it.” —Julia Child.