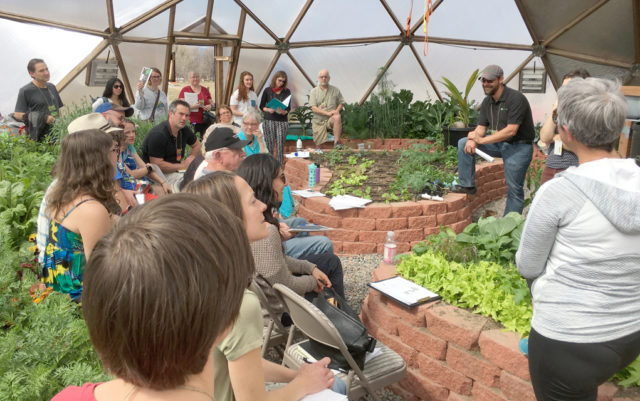 What kinds of food do you think about when you think of Jewish cuisine? Whatever they are — creamy kugel dishes, hulking deli sandwiches, Mediterranean hummus plates or maybe, right now, Passover seders — the folks behind the Colorado Jewish Food Festival hope you think about one thing above all: sustainability.

Now, we’re reaching terminal velocity on the term “sustainability,” but its concepts are taking root in food systems around the world. And the application of these earth- and community-friendly farming principles to the Jewish community is a veritable revolution.

Becca Gan Levy runs the Milk and Honey Farm at the Boulder Jewish Community Center (JCC) as the organization’s farm and sustainability director. The farm is small in size (about two acres) but possesses an outsized community impact simply by getting people in the Jewish community involved in the sustainability movement, Gan Levy says.

“It’s a great way to get people together, because people, for the most part, like to be outside and they like to eat good food,” she says.

Gan Levy says Jewish community farming is an “international movement,” with people from Toronto to Tel Aviv looking backwards and finding a long history of sustainable farming in Jewish communities.

Sarah Kornhauser, director of Hazon Denver, a chapter of a nationwide group that supports Jewish community farming, says when the group started their Colorado branch nine years ago, there were four or five Jewish farmers in the state; now there’s more than two dozen. Hazon gives out $25,000 in grants every year to those promoting the virtues of Jewish community farming.

Kornhauser says it makes sense the community has taken to sustainability: there are key parts of historical Jewish teaching that lay out how the community can achieve sustainable farming practices, many of which we, today, would consider contemporary.

“The Talmud (an important Jewish text regarding laws of living) is sort of the original farmers’ almanac, with rules about how much to harvest and what you want to grow,” Kornhauser says. “It feels really modern and relevant today.”

The Talmud, for instance, calls for farmers to leave the corners of their fields unpicked for the poor. That may not always have a direct contemporary application, both Kornhauser and Gan Levy say, but there are ways to achieve its intention.

The Milk and Honey Farm doesn’t sell the crops they harvest; instead they’re donated to Community Food Share and Boulder Food Rescue, Gan Levy says. And though not everyone can farm, everyone participates in the food system and either supports the values of sustainable farming or not with how they spend their dollar, Kornhauser adds.

“Maybe you don’t have a field to glean from,” she says, “but maybe you leave a bigger tip [at a restaurant].”

Gan Levy says the Talmud also outlines rules about how to treat animals with respect and not waste resources. For instance, though kosher meat can only be procured from certain animals slaughtered in a certain way, and must meet further standards, “sometimes kosher meat doesn’t have the highest animal welfare standards we know [are possible] today,” Gan Levy says. Smart shopping and dining choices can effect that change.

In a community and a food culture that’s so steeped in tradition, Gan Levy says making choices that live up to the standards of Jewish community farming comes down to how those choices affect the world: “What guides us is what are we going to do to give someone or a community a good experience?”

And that’s a self-feeding loop, Kornhauser says, as people access their Jewish identity through farming and embracing the environment.

Although there is that historical precedent for Jewish sustainable farming, Kornhauser says there still exists modern-day traditions that might conflict with a healthier, more eco-conscious approach to food. Many traditional American-Jewish meals originated in Central and Eastern Europe, where Ashkenazi Jews blended their own culinary history with those of Germany, Russia, Romania and more, which often carry objectively gut-busting recipes. The resulting dishes are, of course, heralded and passed down between generations, which can make it hard to, say, embrace gluten-free or vegan takes on something so tied to identity.

But it needn’t be a complete takeover, Kornhauser says.

“Tradition is important. We’re not saying tradition needs to go out. It’s about meeting people where they’re at,” she says, adding that she doesn’t want the comfort dishes in Jewish cuisine to go away, but only to start the conversation around creating, “a healthier ooey-gooey feeling” from those meals.

For example, instead of using schmaltz, rendered chicken fat common in Jewish cuisine, Kornhauser says those interested and willing can make it themselves using local, organic, sustainably raised chickens. After all, this new Jewish community farming movement, if anything, is about marrying centuries of Jewish tradition with modern sustainable resources.

“Just as my grandma updated those Eastern European recipes, we have to update [ours],” Gan Levy says.

The Colorado Jewish Food Fest will include dozens of opportunities for people to experience what the movement is extolling. Because Jewish communities exist around the world in Diaspora, there are many culinary influences that can and have been applied to traditional Jewish cuisine. A new Japanese-Jewish fusion restaurant recently opened in New York, and Kornhauser says the introduction of Mexican spices and ingredients into Jewish food from Mexico City’s large Jewish population has led to interesting creations.

Attendees are going to be able to sample some of these fusions, as well as some traditional dishes, from local chefs and restaurants. There will be an aquaponics demonstration, and as this will be the event’s first year at the JCC, attendees can check out the farm operation as well.

The Fest is a window into a movement, Kornhauser says. And what has spurred the larger sustainability movement is likely playing a large part in spurring the Jewish community farming movement, she adds: a belief in playing a critical role in something larger.

“What gives it roots is when it connects on a spiritual level,” Kornhauser says.

The Colorado Jewish Food Fest is April 15 from 10 a.m.-4 p.m. at the Boulder JCC.
For more information, go to coloradojewishfoodfest.com.