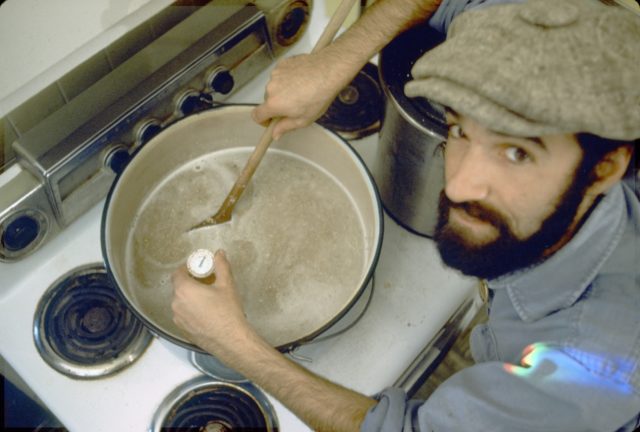 Boulder has plenty of historic monuments. A new one in North Boulder Park honors the Red Zinger and Coors Classic bicycle races. A statue and a wall mural immortalize running legend Frank Shorter. Colorado Chautauqua is a National Historic Landmark, the Boulderado is on the National Register of Historic Places, hell, even the Holiday Drive-In Marquee and Denver-Boulder Turnpike have historic markers.

Yet, there is not one single monument, marker or star embedded in concrete anywhere celebrating the fact that the American craft-brewing renaissance was birthed in Boulder. There should be one of those bronze lifelike statues on the Pearl Street Mall showing Charlie Papazian stirring a batch of homebrew.

He is the godfather of America’s homebrewing and craft-brewing renaissance. He wrote the best-selling beer book in U.S. history. Papazian has done more in the past 40-plus years to put Boulder on the map than almost anyone. In the brewing world — literally, anywhere in the world where there is beer — Boulder is famous. Beer fans, homebrewers and mega-brewery owners know that Charlie lives here.

Some recognition is finally coming. The famous brewing spoon Papazian used to make homebrew is going on exhibit at the Smithsonian. History Colorado’s new Brewing the New West exhibition tracing the history of beer in Colorado features a faithful reproduction of what the museum describes as “the kitchen that brewed up the modern craft beer industry.” That’s Charlie’s kitchen.

If you like tasting rooms, sour ales, beer festivals, pairing dinners and coolers full of porter, weiss and saison, thank Charlie for persevering because things looked grim for American beer in the early 1970s.

“Not many people had the foresight to imagine what craft brew is now. Everybody thought I was a nutcase. They told me it was a short, doomed trend. They said people wouldn’t pay more for beer that tasted good,” Papazian says.

Papazian arrived in Boulder in 1972, a nuclear engineer looking for another path. He found it teaching at elementary school, where he also famously declared his birthday, January 23, as National Pie Day. “I wasn’t looking to make beer my life. Then the Free School discovered I knew how to brew and asked me to teach classes,” he says. The only beer brewed in Colorado at the time was a regional favorite called Coors.

There should be a historic marker placed outside 1834 19th Street in Boulder, former site of Charlie’s apartment and the kitchen where he taught his legendary classes. “It was illegal when I started teaching. My class got visited by a federal [Alcohol, Tobacco, Firearms and Explosives] agent. You could tell by the way he was dressed. I always told classes to make beer, just don’t sell it,” he says.

It turned out to be an appropriate venue.

“I was told that during Prohibition my house was where they stored the beer,” he says.

In 1978, the Carter administration legalized homebrewing, and Papazian and cohorts launched the American Homebrewers Association and Zymurgy, the homebrewing magazine. “Boulder became the world center for information about beer because there was nothing available: No magazines or books on brewing or beer styles,” he says.

The house helped create a brewing community that supported the efforts. People who attended the classes went on to open craft breweries. Papazian wrote The Joy of Homebrewing there — it has sold more than 1.3 million copies — and researched recipes. Beer yeast producer White Labs offers Charlie’s Fist Bump Yeast, the strain he developed to brew the beers in his books.

“That house was where we drank too much of our own good beer and thought we could change things. The seeds planted there grew and spread,” he says.

There should be a roadside historic marker on Sugarloaf Mountain, where the group’s infamous annual Beer & Steer parties were staged starting in ’74. The gatherings of 300-plus people inspired the Great American Beer Festival (GABF).

There should be a plaque outside the Millennium Hotel stating: “The largest and most respected beer event in the United States started here.” The first Great American Beer Festival was held at the then-Harvest House Hotel in 1982 featuring a handful of ales. The always sold-out GABF is now held annually in the Colorado Convention Center.

The Association of Brewers followed in 1983 because big brewers dismissed microbrewers as irrelevant. The organization was known for assisting and collaborating with other brewers. “We’d help people with information on brewing and legal issues because brewpubs were outlawed in most states,” he says.

In 1984, the brewing world started congregating in Boulder annually for a national conference. “Being enthusiastic about beer was non-existent in Boulder at the time, but we had professional brewers, brewery founders, brewing professors coming from all over the world,” Papazian says.

Papazian insists he was just the point person for the revolution. An army of similarly inspired, mostly volunteer spirits got us to beer heaven. “It was the hippies in Boulder risking their life savings who got it all started,” Papazian says.

The results of their work are all around us. A recent analysis of 500 U.S. cities ranked Boulder No. 4 among the most well-served populations with 14 breweries per every 50,000 people (and probably the most brewing awards per square mile.) People now vacation here to drink beer.

History is fun, but Papazian is busy. Recently retired from the Brewers Association, he was heading home to brew a batch using his home-grown hops based on a beer he recalls tasting in 1982.

His next stop was Quito, Ecuador, where he was the honored guest for the reopening of the first brewery in the Americas. The monastic brewery established in 1545 was discovered by Papazian in 1992. When he raised a glass of Ecuadorian beer, he offered an iconic Boulder mantra.

“In the mid-’70s, when we were facing various problems, one of us would turn to the others and say: ‘Relax. Don’t worry. Have a homebrew’ — and things invariably got better,” he says.