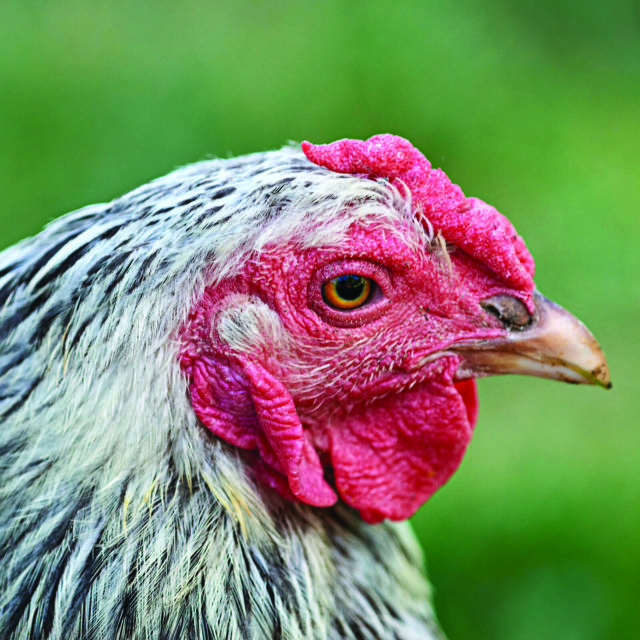 Open a carton of Boulder’s Alpine eggs, and it’s clear that these eggs are different. Of the dozen, three eggs are pale blue, several of the oval orbs are dark brown and others are tan or white.

Only six are the standard “large” size. Several are so big they barely fit in the carton, and others eggs are smallish. Pick any one up and it seems heavy for its size.

When you crack an egg, the white is transparent, and, rather than pale, the yolks are an intense Van Gogh yellowish orange.

Eggs are one food we often eat unadorned, and I’m an admitted egg lover. Whether hard boiled, over easy or poached, Alpine Eggs simply taste fresher and—for lack of a better term—eggier. There is a good reason. These chickens are living the high life.

“Our chickens have seven acres to run around on. In season they are able to eat plants and hunt insects.  We feed them primarily organic food and they have a big heated coop. They live very well up here,” says Andreas Badian, owner of Boulder’s Alpine Eggs.

“Up here” is Badian’s home at 7,700 feet on Flagstaff Road, miles past the Flagstaff House Restaurant. It comes by its “Alpine” name legitimately.

Badian doesn’t think of himself as a farmer, but rather a man whose passionate hobby and love of animals has taken over his backyard.

“They are my pets. We have a lot of different breeds. Some of them I buy because they’re cool looking, like the Brahmas. I sell the eggs to finance the keeping of the chickens. I don’t really make any money from this business,” Badian says.

“There was a time at the beginning of the [pandemic] when there were no eggs available at supermarkets and I had people calling me to book eggs a week ahead,” he says.

Being a high-altitude artisan egg supplier was the last thing on Badian’s mind when he was living in Greenwich Village. But, “even in New York I kept reptiles, fish and parrots. I’ve always loved taking care of animals,” he says.

Badian moved his family to Boulder eight years ago for a healthier lifestyle and poultry therapy. “I work as a financial consultant. In order to get me outside, away from the computer and more in touch with nature, I got the chickens. They help me balance my life. My kids are 5 and 8 and they are learning to make their own omelets—with direction—every morning,” he says.

The cost of supermarket eggs is going up, but dozens from local farms are still more expensive than most “sustainable” commercial eggs.

Here’s why they are worth it, according to Badian.

It’s important to know that “cage-free” supermarket eggs describe chickens who live in one square foot of space, and “free range” bumps the space up to about two square feet. “Pasture-raised” means more than 100 square feet per bird.

Buying sustainable local farm eggs helps keep local agriculture viable. “Since the pandemic I’ve thought a lot about disaster preparedness. It’s important to support farmers so that they are there when you need them,” Badian says.

When his chickens’ natural life is over, he harvests the birds. “We try to use all the parts of the chickens. We sell whole roasting chickens and chicken liver pâté,” Badian says. He even uses a dehydrator to dry the chicken feet to use as treats for his dogs.

Badian’s recipe for roasting a whole chicken is simple. “Get yourself some fresh oregano, thyme and rosemary and half a stick of butter and put it inside the bird. Put the bird in a 375-degree oven with a lid on the pan. Every once in a while, take the lid off and whatever liquid is in there, pour it on top of the chicken. That keeps it moist until it’s at temperature. That’s 165 on the meat thermometer. Take the lid off and turn up the heat so the skin gets brown and crunchy. It takes about an hour and half—depending on the size,” he says.

However, Badian recognizes that not everyone has the time to roast a whole chicken—and he’s got you covered.

Alpine Eggs and other products are only available in self-serve coolers at 724 Gapter Road, 1415 Kalmia Avenue and 5541 Flagstaff Road. Information: facebook.com/alpineeggsboulder. Orders: 303-444-0634

“Marriage is not merely sharing one’s fettuccine, but sharing the burden of finding the fettuccine restaurant in the first place.” —Calvin Trillin, Alice, Let’s Eat