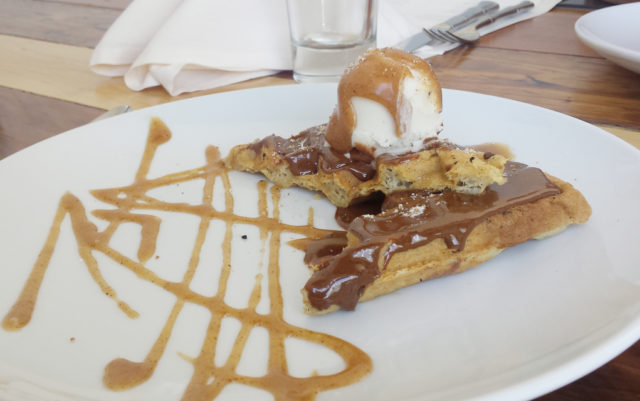 Iva Paleckova spent half a year developing the waffle batter for Blooming Beets Kitchen. Waffles are a little trickier when they’re not only gluten-free but grain-free too.

With a friend and co-worker, Paleckova experimented with different combinations of nut flours and egg and oils, trying to create a batter that would rise into the perfect waffle: crispy on the outside, light and chewy on the inside.

Sometimes they would think they got the batter just right, but scaling the recipe up for a commercial kitchen would send the cooks back to the drawing board.

And then the waffle maker broke. So they made pancakes for a while, which proved even harder.

“Every time you put it on [the skillet] it would be like a different pancake; sometimes it would rise, sometimes not. We thought, ‘What are we doing wrong?’” Palechova remembers. The two of us are sitting in a sunny corner booth in the back of Blooming Beets Kitchen on 30th Street, and we’re about to eat a waffle — a salted caramel, coconut ice cream, hazelnut spread waffle that’s just been added to the eatery’s lineup of desserts.

It turns out that what they were doing “wrong” with the batter could be as simple as the size of the eggs.

“It was traumatic,” Palechova says with a laugh.

But the Czech native refused to give up. In fact, Blooming Beets Kitchen itself is a testament to Palechova’s determination. A little more than two years ago, Palechova was listless and devoid of passion working in a corporate job. She had developed a fascination with not just healthy eating but “clean” eating, foods that were free from processed ingredients like gluten and refined white sugar and grain. And one day her husband suggested that she take that passion for food and open her own restaurant.

She’d waited tables and washed dishes before, and the physicality of the work, the connections she was able to make with other people, was enjoyable for her. Indeed, it was far more enjoyable than sitting at a computer all day.

So she put everything she had into making Blooming Beets Kitchen a reality, a place where anyone, no matter what their dietary restrictions or health concerns, could choose from a whole menu of delicious foods.

Quite literally, she put everything into Blooming Beets; her savings, her 401K from her corporate job, her husband’s savings and his 401K. And even though things looked beyond scary at points as she devoted 16-hour days to her endeavor month after month for the first year, she stuck to it.

And part of sticking to it meant getting the damn waffle batter right.

The end result is a waffle made mostly of in-house ground raw organic cashews mixed with coconut oil, avocado oil, eggs, organic maple syrup and a bit of coconut flour.

“After about half a year making the batter basically every day, I would say a good 180 iterations, you make it every day and sometimes twice a day for both shifts [we got it right],” Palechova says. “Just little tiny tweaks; a little more of this, a little less of this.

“And sometimes it still isn’t right.”

But someone from the kitchen has just brought us a split order of the new waffles, and it’s a little hard to believe they don’t nail this every time.

As I sink my fork into the first fluffy bite, Palechova tells me about the ice cream, made at Cows Gone Coconut in Longmont, which produces their coconut milk in-house. It is as creamy and decadent as any Häagen-Dazs treat, and the slowly hardening caramel provides a light crunch with just the right touch of saltiness.

Speaking of, the caramel is made with Himalayan sea salt, coconut oil, almond butter and maple syrup, and the hazelnut spread covering the waffle is made of 100 percent chocolate, egg yolks, coconut palm sugar, coconut milk, avocado oil, almond flour and coconut flour.