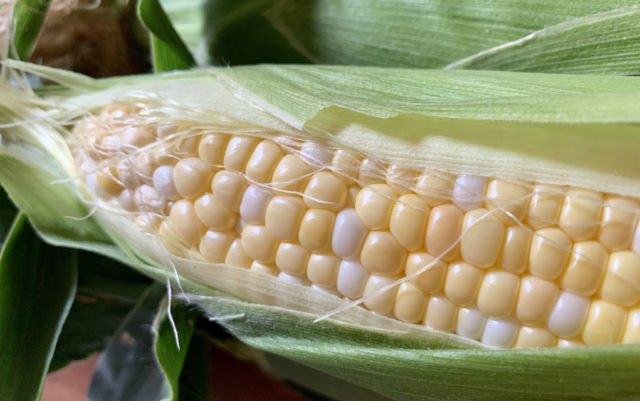 Sure, you can get green beans, tomatoes, honey, flowers, squashes and more produce from the Munson Farms stand at the corner of Valmont and 75th in Boulder. But if you’ve stopped by in the past, it’s unlikely you left without one of two crops: pumpkins or corn.

We’ll leave the pumpkins (and the patch) at Munson Farms for a later date, because the corn those folks are producing is in-season and delicious.

On a recent visit, the farm stand had a bushel of white corn and about three bushels of Peaches and Cream sweet corn. That appropriately named variety comes with yellow and white kernels on the cob. It’s one of the sweetest varieties of corn, and the kernels were perfectly textured upon cooking — crunchy, tender and juicy.

You can get three ears of corn for $2 at the Munson Farms stand, a bargain considering the quality.

Because it’s so flavorful, you’ll be tempted to eat it on the cob (and, truly, you won’t need butter or margarine, or even salt, to boost the flavor). But strip the kernels and elevate salsas, combine and fry into fritters or macerate into chowder. Or layer it into more corn, as in corn with polenta (see below).

If you’re not used to good corn, you’ll be shocked by how much flavor one little kernel can carry. There’s still a few weeks left in corn season, but when the crop tastes so good right now, why wait?

To grill or to boil?

I grew up in a corn-boiling family. There didn’t seem to be much reason to innovate past that — fresh New Jersey sweet corn has as much flavor as what you’ll find at Munson Farms, and when I got older, I never thought much about preparing corn.

Until I started to buy some supermarket, off-season corn and found it severely lacked for flavor. At barbecues, of course, I’d seen people throw corn on the grill but thought it might be overkill. So I tried it, and the balance of sweet and bitter that a char on corn provides was great. Then you throw in the discovery of elote, Mexican street corn, which is grilled and adorned with cheese and spice, and well, I felt like an ignoramus.

But there’s still room in the corn world for both preparations. Anecdotally, grilling brings more flavor but boiling makes corn juicier. I prefer the texture of boiled corn over grilled because sometimes char spots can get too dry, or a hair you forgot to pick off the cob stiffens on the grill.

With good corn, boil; lesser corn, grill. But no one’s going to fault you for fire-roasting some Munson Farms corn and turning that into a salsa.

What goes better with corn than corn? Don’t answer. But the doubling up on corn flavor, with a few adornments, makes for a flavor-rich polenta you can eat as a side, top with meat or fry into fritters.

Grab some polenta — Bob’s Red Mill and the white polenta from Black Cat are pretty darn good — and cook in a two-inch-deep saucepan. You’ll want about four to five cups of water for one cup of polenta, but it’s somewhat of a guessing game. Start with four and add early if the polenta looks dry. Bring to a low boil and then send heat down to low. Stir frequently to break up lumps in the first 10 minutes, then cover, and stir every 10 minutes until it’s congealed and silky, about 40 minutes. Toward the end of the polenta cooking time, boil the corn for eight minutes, then strip the kernels off. Fold in about two ears-worth of corn into the polenta and add butter and/or olive oil. I add both, in heaping amounts, to make the polenta silky — as in, probably five tablespoons of butter and two tablespoons of olive oil. Feel free to throw in some salt and Parmesan cheese here, too. Top with black pepper, fresh herbs, some more corn and a drizzle of olive oil.

Refrigerate the polenta and it’ll solidify into a corn brick. Cut the pieces into squares for an old Central Italian preparation called polenta pasticciata, translated roughly to “messed-up polenta.” You can fry the squares and top with everything from tapenade to a meat ragù to mushrooms and sage. Or layer the slices in a glass baking pan with, basically, lasagna ingredients — tomato sauce, mozzarella cheese, ground meat or sausage and bake at 400 degrees or so for 30 minutes.