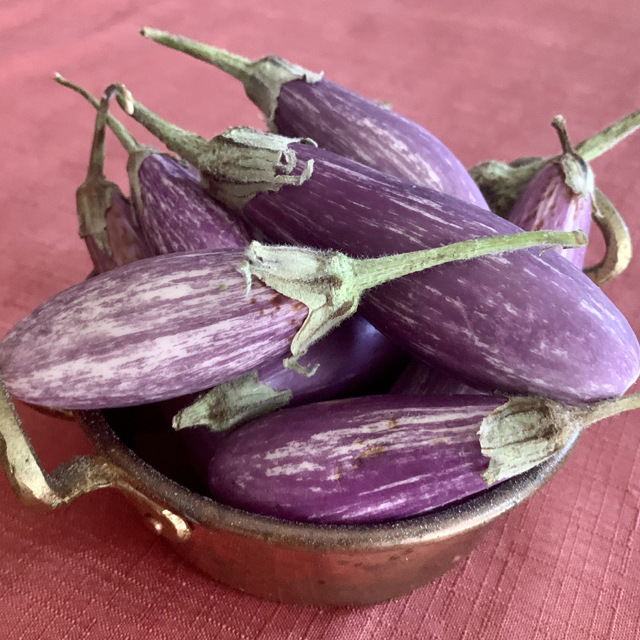 We know that carrots, corn, tomatoes and a host of other crops taste better when they’re grown locally by caring farmers. Add eggplant to the list. Try one from a local farm (especially now as we enter peak aubergine season) and you’ll bemoan the lack of eggplant diversity available year-round in the supermarket.

Eggplants come in a variety of colors (dark purple, light purple, green, white, speckled), sizes (fat, long, squat, mini) and, to a lesser degree, flavors. The best way to choose an eggplant is to determine what you’re going to use it for. Planning to make eggplant parm or baba ghanoush? Reach for a fat Italian or American eggplant (the kind you see at the store). Want to make quick work of your nightshade fruit (yep, it’s a fruit)? You’ll want a thin or short variety, like a Japanese, Indian or fairytale.

The eggplants of which you can make quick work should be the preferred eggplant stocked by grocers — but that’s just my opinion. They’re versatile, easy, well-textured and flavor-rich, and they’re often heirloom varieties grown organically.

I found an abundance of fairytale eggplants at the Rocky Mountain Fresh (of Lyons) stand this past weekend at the Longmont Farmers Market. You can get them in large or petite sizes — again, I like the smaller ones for their versatility.

You’ve probably heard the myth that eggplant has no nutritional value, or the fruit may have what you consider a mild flavor. But if you pick the right varieties and ones that are grown right — both are the case with Rocky Mountain Fresh’s harvest — you can maximize whatever health properties it has (nutrient-rich and high in antioxidants) and fully realize the potential of its flavor.

To salt or not to salt?

As is so often the case in cooking, the techniques such as salting eggplants often come down to personal preference, tradition and anecdotal evidence.

This may sound like blasphemy to some, but there’s no real reason to salt eggplant anymore; it’s a tradition that started centuries ago when eggplants were very bitter. All that astringency has been bred out of modern eggplants, but, dang, it really feels like you’re doing something when all those water beads pop up on eggplant slices, doesn’t it?

You definitely don’t need to salt thinner eggplant varieties, which will become tender and slightly sweet almost instantly on heat and which you can shape to your taste preferences with other ingredients and adornments.

That said, don’t give up on salting produce, just reimagine it. Let a bowl of sliced radishes sit in some salt for a few hours and you’ll have tender, flavor-concentrated slivers that still retain their characteristic snap.

The best thing to do with fresh produce is to do as little as possible. That’s the case with mini fairytale eggplants, which go great with a high-heat sear and some olive oil and garlic. Cut the eggplants in half lengthwise while you heat up a grill or, in my case, a one-sided, stovetop panini press. Lather the eggplants with olive oil and sprinkle over some salt and then grill on each side for about two or three minutes — until you see defined char marks on the side touching the heat. Flip and repeat. Sauté some garlic and fresh herb (rosemary is what I used) in a few tablespoons of olive oil until just aromatic (about four minutes). Combine the oil mixture with the eggplants, mix and serve. I cut the stems off my eggplants before cooking, but you can leave them on for a finger-food style presentation. Just don’t eat the stems.