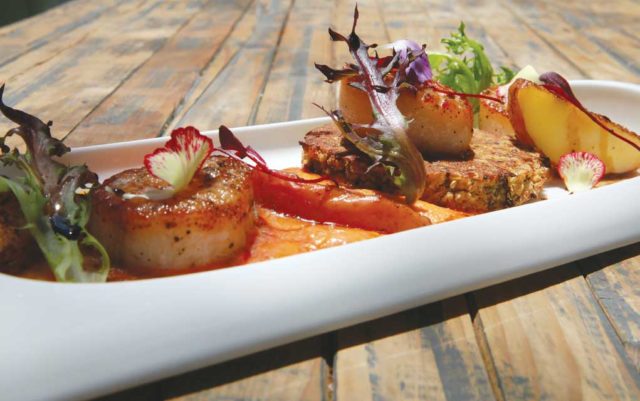 Boulder County’s restaurant week, First Bite, is getting a bit of a makeover this year. Longtime food professional and events producer Jessica Benjamin bought the rights to First Bite earlier this year, and the changes she’s implementing for the 14th annual event (Nov. 8-16) are all designed to get more people going to more restaurants.

Don’t worry — you’ll still be able to eat at some of the best restaurants in the county on the cheap. The idea, though, is to refresh some of First Bite’s features and focus in on its ability to build and support the local food community.

“Boulder County has changed over the last 10 years. This is a way to start fresh,” says Benjamin. “More than ever now you’re seeing people be more aware of where their money’s being spent and the impact of it. This is encouraging people to shop and buy local. It’s hard [for restaurateurs] to support all of their employees, who are often working two to three jobs. The cost of food is up and the cost of materials is up.”

Communal events like First Bite help bring some of the industry’s challenges directly in front of the consumer — it’s a hard business, particularly in Boulder County with high rent prices, low unemployment and even lower margins. Benjamin says “changing First Bite to be more about building and supporting a community,” was done so that everyone, from the restaurant owner to the bus boy to the diner, benefits.

The first, and most noticeable change, is a switch from one price point to two. This year, diners can choose from $29 and $49 prix-fixe menus at participating restaurants, which Benjamin says means that “different groups of people will be able to participate.”

Also, festivities will kick off well before the actual restaurant week this year, with First Bite partnering with Local Table Tours to offer intimate dine-and-tour events in September and October at restaurants that are participating in First Bite. Benjamin says partnering with Local Table Tours, “felt like a great opportunity … to help build the excitement and energy of the event.” Participating restaurants will be announced in a few weeks.

Benjamin has worked with local nonprofits for a decade in her previous event work, so it’s no surprise that there is a strong commitment to giving back to the philanthropic community in this year’s event.

On Tuesday, Nov. 12 (“Two for Tuesday”), guests will be encouraged to add $2 (or more) to their bills, which will be donated to one of five charities. The total amount of funds raised will be matched by corporate and private donors, Benjamin says, so there’s an opportunity to make a huge impact on one night.

“The non-profit community in Boulder County is incredible. So many groups do such a great job for lots of different people,” Benjamin says. “I wanted to find a way to highlight the work they’re doing and give them exposure and raise them a little money. … If we have five nonprofits, hopefully 10 restaurants each will be supporting them, and [at least] building awareness about what the nonprofits are doing.”

The Two for Tuesday fundraiser is a clever way to get people dining out on the one night of the restaurant week that’s historically had lower turnout — the hope is to “increase attendance on Tuesday night, which is typically the slower night,” Benjamin says.

“My vision is that if someone’s eating Tuesday night dinner, they’ve decided to give back and they’re learning, or thinking about volunteering or making a larger donation,” she adds.

Benjamin’s a good fit to implement these changes into First Bite — she says one of the reasons she bought the restaurant week’s rights is because it felt like “all of my passions and skill-sets coming together.” Benjamin started in the industry doing marketing for The Kitchen, and through her event planning work, collaborated with Jax Fish House, Snooze, Corrida, Isabelle Farm and more. But despite these partnerships, her work took her further and further away from the food scene — her passion.

“I’ve always been a foodie and loved the food industry,” Benjamin says. “I tried to stay connected, kind of in an outside way. Having my background, it seemed like the perfect opportunity to take [First Bite] to the next level.”

Benjamin also recognizes Boulder County is a good place to run a restaurant week. She researched other successful restaurant weeks across the country, and noticed there was a correlation between their success and the rise of community food knowledge and interest due to the farm-to-table movement and the Food Network. Around the country, this combination has raised the culinary IQ of the average diner, and Boulder County is no different.

Benjamin says restaurateurs appreciate all that passion from diners, but that they say it’s still good to have a formal restaurant week to help build the identity of the food scene and remind folks that if they like a restaurant, they should put their money where their mouths are.

“I’ve talked with dozens of local restaurants. Everyone loves our city and our county and loves the community and wants to find more ways to reach them,” Benjamin says. “Where you’re eating is where you’re voting with your dollar.”

With the aforementioned changes in place, your dollar may go a little farther this year.