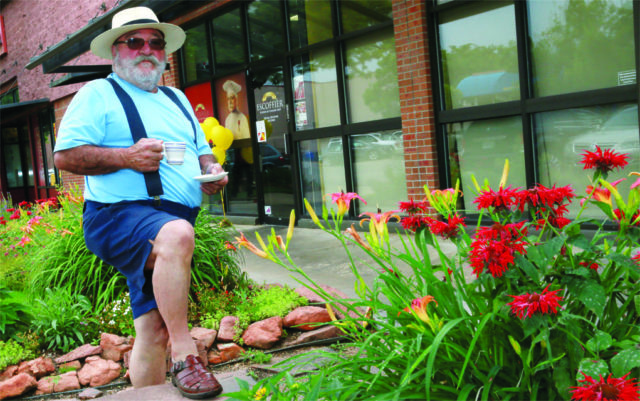 Scarcely a month passes without the City of Boulder winning another food and drink award. This month alone ApartmentGuide.com named Boulder one of the 10 Best Cities in America for Vegetarians because great vegetarian, vegan and organic dining is available here.

Diners now make pilgrimages to Boulder, Bon Appétit’s Foodiest Town in North America. Similar culinary kudos have come from USA Today and Forbes Travel. Boulder is tagged as the epicenter of the craft brew renaissance and the Silicon Valley of natural foods, with an award-winning farmers’ market.

It may be great to eat in Boulder, circa 2019, but that tasty status did not just happen overnight.

Boulder in the mid-’90s had less: fewer restaurants and espresso joints, no distilleries and the grocery choices did not include Trader Joe’s, Whole Foods, Lucky’s or Sprouts. The few destination eateries were the Flagstaff House, Ristorante Laudisio, Red Lion Inn, Greenbriar Inn, Radek Cerny’s European Café and John’s Restaurant.

There were a handful of brewpubs but the proliferation of brewery tasting rooms was still in the future. The handful of natural foods eateries included the venerable Boulder Harvest and Rudi’s.

People came to this college town less to dine than to hang out at The James, The Walrus, JJ McCabe’s, Juanita’s and up on the Hill. Brunch spots like Rocky Mountain Joe’s, Pour La France and Nancy’s thrived.

In 1994, I was finishing my first decade as Daily Camera food editor and Nibbles columnist and watching the Boulder food scene morph. From that time I still miss the flaky bastilla at Mataam Fez, smoky ribs at Daddy Bruce BBQ, tart pie at the Calypso Grill and the vodka at the Little Russian Cafe.

For this special 25th anniversary issue, I scanned the 1993 and 1994 issues of Boulder Weekly. In the stories and ads, you can see seeds of the area’s culinary rise were clearly being planted. I asked chefs and restaurateurs who were around back then to talk about Boulder’s food scene in the mid-’90s and where we are today.

With his brothers, he opened the family’s signature Italian eatery, Ristorante Laudisio, at Iris and 28th Street. There were other Italian spots at the time from Attusso’s to Caffe Antica Roma and D’Napoli, but Laudisio was special. It was voted the Best Italian Restaurant in Denver for several years. I tasted my first risotto there. Antonio Laudisio soon joined the Romano family in opening The Med downtown.

“Back then everybody knew each other and went to each other’s restaurants. The food was more approachable and affordable, and there were fewer chain places. Now we’re reaching this celebrity realm,” Laudisio says. I reminded him that in the early- and mid-’90s Boulder’s restaurant community actually gathered annually at the Glenn Miller Ballroom for the Taste of the Nation hunger relief event.

Boulder was ready for good food in 1994. “There were a lot of young chefs and farmers, like Chet Anderson, that were really excited about food. There was also a growing base of educated customers who were well-traveled, because of the university and the business community. They wanted a distinctive dining experience, not an Anywhere U.S.A., cookie-cutter meal,” Laudisio says.

The other critical factor in Boulder’s subsequent rise to national culinary fame was a demographic that had been long ridiculed and marginalized: Hippies. “Hippies changed the way we eat now. Hippies were people who wanted to identify more closely with nature and against corporate food,” he says. It was the tofu-nibbling longhairs who launched many of America’s iconic natural food brands and made Boulder the address you wanted on your vegan, GMO-free and organic food or beverage product.

Dave Query had already opened two local eateries  (the Lick Skillet Café and Q’s), moved his family to Michigan and returned to town by 1994. He opened Zolo Grill in the old Swenson’s Ice Cream Shop (because it had parking) followed by Jax Fish House west of the Downtown Mall a few months later.

“It was awesome in 1994. There were great places in town like the 14th St. Grille, The Cork, the European Café, Carelli’s and the Flagstaff (House). There was the LA Diner with the roller-skating waiters. That was cool. It wasn’t foodie heaven yet, but we were all doing a good job,” Query says.

While Boulder had promise, it took the arrival of one restaurant to shift the paradigm. “The opening of Frasca in 2003 raised the bar for all of us and the quality of dining in Boulder. The Foodiest Town in America does not happen if Bobby (Stuckey) and Lachlan (Mackinnon-Patterson) decide not to open Frasca. They dragged us to a much higher level of operation. Now Boulder has this big-time cachet,” Query says.

“I was young. I was dumb, but I was passionate and had great ambitions in 1994,” says Bradford Heap, chef/owner of Salt and Wild Standard. A Boulder native, he had opened the Full Moon Grill, an Italian eatery near McGuckin Hardware. Heap went on to help open the Chautauqua Dining Hall as a year-round restaurant, and then Colterra in Niwot.

“I wanted to do things like I’d seen in France. I started going to the farmers’ market for produce. I had one of the first vegetable tasting menus in town. The veggies, not the meat, were the stars,” he says.

“I read The Omnivore’s Dilemma by Michael Pollan and that changed my life. I decided to stop using factory-farmed meat. My rule was that I wouldn’t serve anything at the restaurants that I wouldn’t eat,” he says.

Heap suggested that the city has grown culinarily since then. “I see people cooking a lot more in season. There is much more local sourcing of ingredients and working with the farmers, and a greater concern for how the food is grown. Diners expect more transparency,” he says.

Heap has continued to boost local organic farming and sustainable food practices. “There’s so much hype and baloney about food and diets. Just shop carefully. Read labels. Support local farmers. Select food with your family and cook and eat together. That’s what matters,” he says.

Scott Monette: Change is the only constant

Scott Monette grew up at Flagstaff House Restaurant since his dad, Don, operated the eatery on the side of the mountain. In 1994, Monette had begun work as a manager while his brother, French-trained chef Mark Monette, was taking over the kitchen.

In 1995, Flagstaff House was still in its Continental era. “We were still serving plates with domes. The service was about elegance and showmanship, but it was very hectic. The menu featured beef Wellington and large plates of game meat,” he says.

How has the Flagstaff House survived through the decades as so many eateries have come and gone? “It would have been easy to stick with how we had always done it. We had to keep changing, updating the building and the wine list. You do get pushback from longtime customers but you have to keep it fresh. We’re doing a tasting-style menu now with many more choices,” Monette says.

The current crop of competing upscale eateries in Boulder, including Blackbelly, Corrida (and OAK), Black Cat Bistro, The Kitchen, Basta and Arcana have been a plus for Flagstaff House. “There are so many great restaurants that it increases the critical mass of diners who love and know great food and wine,” he says.

John Imbergamo: ‘There wasn’t much going on foodwise’

“I almost never came up to Boulder in the mid-’90s. There wasn’t much going on foodwise,” says John Imbergamo, a restaurant consultant who represents Jennifer Jasinski’s Denver eateries including Rioja and Stoic & Genuine.

“At that time, fine dining places were few and far between in the Denver area — and mostly steakhouses. I do remember eating at Radek Cerny’s place, the European Café. That food signaled the beginning, to me, of Boulder’s rise from casual dining to much more sophisticated food. Now, Boulder has an oversized food reputation for a city of its size,” he says. Imbergamo, a longtime vegetarian, tipped his hat to Falafel King on the Downtown Mall where he first tasted the fried chickpea fritters.

So many hundreds of restaurants have opened and closed in Boulder since 1994 and there have been multiple eateries at the same address. “We always talk about all the hot new places, but the restaurants that have survived for 25 years should be highly respected,” Imbergamo says.

Note to self: Check back after dinner in 2044

Antonio Laudisio continues his culinary mission as a caterer and, on many Saturdays in season, you’ll see him at the Boulder County Farmers Market stretching pizza dough to bake in an oven he helped build. Bradford Heap can be found overseeing the fare at his sibling eateries — Salt and Wild Standard.

Scott Monette is assuring a smooth operation at Flagstaff House while the next generation takes over. Adam Monette, son of Mark Monette, is now the general manager.

I lift a toast to the food pioneers who set the table and the chefs of the ’90s who delivered delights. Check back in with us to see if today’s class of kitchen whiz kids are still dishing mouth-watering victuals in Boulder, circa 2044.