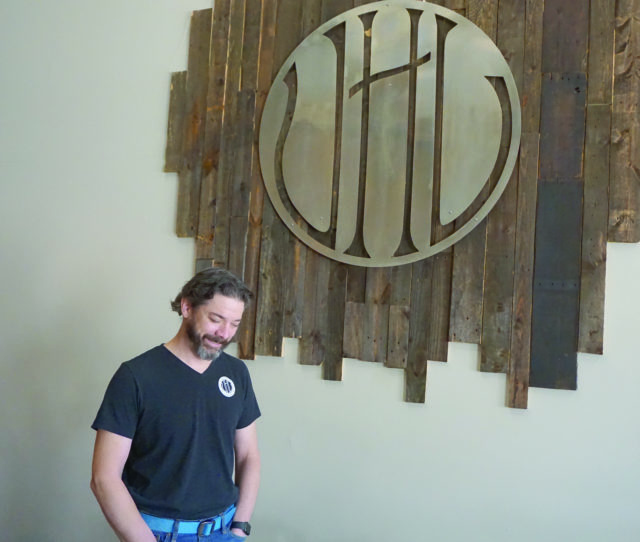 The pandemic has been very much a formidable foe for starting a business and trying to make it out unscathed,” Aaron Uhl, the founder and owner of Uhl’s Brewing Co., says. Uhl’s Brewing has a great slogan: Y’Uhl Love It, which doubles as an articulation of how to correctly pronounce Uhl’s name while paying homage to his family’s brewing history. Ask him about it next time you stop in for a pour. It’s a good story.

And there’s a lot you’ll love about Uhl’s Brewing: hop-saturated hazies, sour smoothies, bourbon barrel-aged imperial stouts, even King Billy—a barleywine that pays tribute to both Chicago’s Goose Island Beer Co. and Uhl’s tabby cat. That is if you’d stop by. Not enough people are. Why? Do you really need to ask?

Uhl is not alone. The loss of on-premise sales has crippled many breweries—even shuttered a few. Just a mile down the street from Uhl’s, Ska Street Brewstillery closed its doors on Jan. 27, 2022. As fate would have it, both Ska Street and Uhl’s opened in March 2020: March 14 for Uhl’s, March 16 for Ska Street—the day Gov. Jared Polis ordered all restaurants, bars, breweries, brewpubs and taprooms closed. Not a great time to open a business.

But, frankly, that’s not the half of it.

“I lost my sister and then my mother, back-to-back,” he says. “So I was an emotional wreck.”

On top of that, Uhl was in the process of taking over sales, which included recovering and rebuilding business relationships harmed by the pandemic’s sudden shift from on-premise to distribution. Other members of his team were also leaving. “Not for anything that was bad,” Uhl adds, “Someone’s wife got a fellowship to Guam.” Another moved to California. Times were tough.

“I was scrambling and doing everything with just a huge amount of emotional distress on me,” Uhl says. So he hired a salesperson, gave him a long leash, and quickly regretted it. He’s still cleaning up the mess.

Uhl smiles a lot, in case you were concerned. Despite the onslaught, Uhl keeps going, keeps making Uhl’s Brewing the best it can be. And it’s working. Last year, Uhl tapped one of his rare barrel-aged beers at a festival in Erie. The crowd he drew was so large the servers couldn’t see the end of the line.

Rare beers and one-offs are a major selling point for Uhl’s Brewing. In the two years since opening, Uhl estimates he and his team have made 180 different beers, pushed 250 barrels of beer out the door in 2020, and increased that to 350 in 2021: “It’s quite amazing. Two people back of house, three people front of house, can put this much beer out.”

But more beer going out the door and more money coming in doesn’t necessarily mean the gravy train has arrived.

“Revenue was up quite a bit,” Uhl says. “However, profits were nowhere to be seen because we’ve got a bunch of backend mistakes that were costly.”

But, as Uhl says, “It’s still a lot of fun because I still get to put myself out there.”

And that includes delivering beer to stores, hand selling to customers—all the things Uhl did when he got into this business four years ago as a contract brewer. That’s what he was out doing on Dec. 30, 2021, when he got the call from his girlfriend. The back of their apartment building was on fire. Louisville was being evacuated.

Not that he could have done anything: Uhl was stuck on C-470. The same winds fueling the Marshall Fire had toppled a semi and shut down traffic. For 40 minutes, Uhl waited for a bulldozer to come and clear the area, only to watch the wind catch the broadside of a Winnebago and roll it “off the side of Bandimere Speedway.”

When Uhl made it back to Louisville by 3 p.m., he found his building still standing. As he gathered what he could and wondered if he would have a place to spend the night, he paused to look out over the fires, the evacuations, the police lights, the “rebar, concrete, and reinforced steel beams” of the Element Hotel burning to the ground.

Two days later, Uhl recounted the events to his dad. To which, father told son: “You know, you seem to have a lot of luck. It’s gotta turn.”

Here’s hoping. Uhl’s Brewing Co. is located at 5460 Conestoga Court in Boulder and is open Wednesdays through Sundays for on-premise and to-go sales.