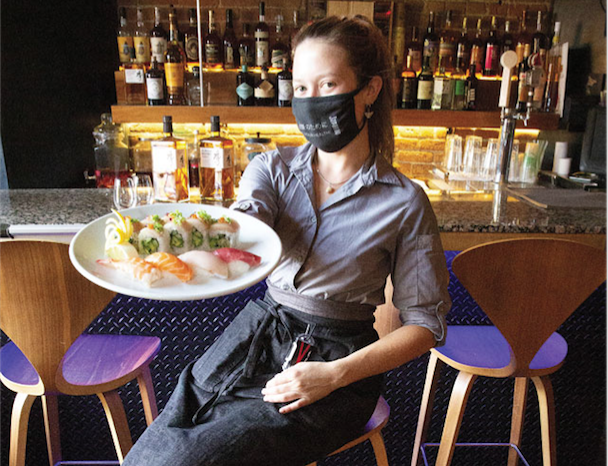 Citing the support already shown by the Boulder community for those most impacted by the pandemic, Japango announced it will give away $100,000 in gift cards to front-line workers by the end of February. You can help them do it.

For every $100 gift card you buy, Japango will give away a $50 gift card to people who have sacrificed greatly during the pandemic, particularly front-line health care workers.

Japango’s Erin and Jon Banis wrote in an announcement of the giveaway that they wanted to make this year “one of giving back.”

“For us personally, we have become more acutely aware of the ways front-line workers carry us through some of the most pivotal emotion-filled times in our lives,” they wrote. “In April as we were getting to know them through Feed the Frontlines, the most amazing team of nurses held our hands (emotionally and physically) while we welcomed our first baby into a world fraught with uncertainty. In October, we watched as our friends’ houses burned, but also the many heroes who worked tirelessly to stave off destruction that could have been far worse.

“Every month in between, front-line workers protected some of the people dearest to us as they battled through COVID. With cases spiking again, we know the health of our loved ones are so precariously close to depending on their hands.”

To participate and purchase a gift card, go to boulderjapango.com/grateful. There, you can also nominate someone to receive a $50 gift card: “someone who has been an immense ‘helper’ these many months or a person who may have lost a person, a job or a home and deserves to be treated to an escape.”

Colorado, and Boulder County, has been at the forefront of pushing for federal aid to restaurants hard-hit by the pandemic. Frasca’s Bobby Stuckey, for instance, took a leadership role at the Independent Restaurant Coalition, which galvanized chefs locally and nationally to push for more state and federal support for their companies and employees.

Add Stephanie Bonin of duo in Denver to the list. Earlier this year, Bonin started and circulated a change.org petition asking for regular $2,000 stimulus checks. The petition has since collected almost 2 million signatures.

With Congress stalled on a second stimulus package since July, Bonin is hoping the petition catches the ears of lawmakers as they negotiate a package this December. (A bipartisan group of legislators announced a “compromise” package recently that does not include stimulus checks.)

“My small business is suffering and my family is afraid — and I know I’m not alone,” Bonin said in a press release. “With newly elected officials taking office at all levels of government, we have a new opportunity to push for more relief checks.”

This winter could be rough for restaurateurs locally and beyond. Many jurisdictions, including Boulder County, have halted indoor dining, which buoyed restaurants over the summer. Already, several restaurants have closed, including The Med, Zolo and Eureka.