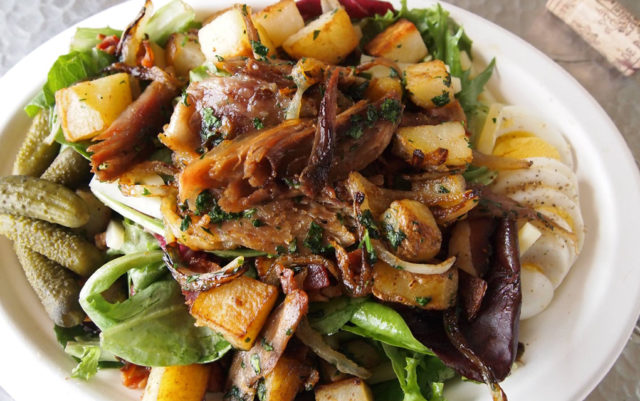 I had barely met Michael DeBoer before he invited me to board Louise. Louise was on her big, yellow second life — she started as the home of the mobile Cheese Louise operation, and DeBoer felt like even though he’d be running his food business, The French Twist, out of her, the truck should keep her name.

But so it was about four years ago — the end of the The French Twist’s inaugural year — and we were outside Upslope’s north Boulder tap room. I had just had a plate of duck confit, some crispy pommes gaufrettes (you may know them as waffle fries) and an Earth-shaking croque madame — a toasted ham and cheese sandwich smothered in a mushroom béchamel sauce and topped with a fried egg. I couldn’t believe DeBoer had managed to pull off such refined food in such a small space; I couldn’t picture where he put all the many ingredients he needed to fulfill his menu and how he had the space and time to pull off so many high-end culinary techniques.

So DeBoer invited me onto Louise to see for myself. He didn’t know I worked at the Weekly or wrote about food. Instead, he invited me onboard, I think, because he wanted to show me that the creation of his elevated French street food didn’t have magical origins. He wanted to show that it’s hard work to hand-cut potatoes into thick criss-cross cuts; he wanted to tell me just how much it takes to make a plate of duck confit (hours of curing and poaching in his commissary); he wanted to point out all the things on Louise that needed replacing in that first year, and how much stress it put on his young business. 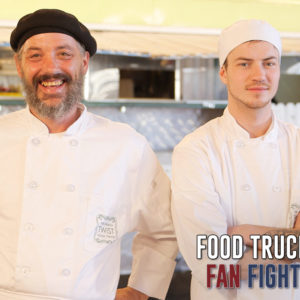 What DeBoer taught me then is that we so often in Boulder County take our food establishments for granted. All we see is the plate of food; we don’t see the bills, repairs and hours upon hours of tedious work that is required to produce that plate.

And so I was happy when DeBoer and wife, Lori, reached out to me recently to tell me that The French Twist, Louise and that duck confit had finally “made it” — they’ll be featured on Food Network’s pilot episode of Food Truck Fan Fight on Oct. 18 (and likely about 100 times over the next few weeks if we know anything about Food Network programming).

The appearance before a national audience, though, isn’t what has DeBoer excited. I chatted with him while he was working to renovate the kitchen of The Broker Inn into a new food commissary out of which he and other bootstrapped culinary makers will work. No, the appearance is a trophy, a symbol of all the hard work it took to get here.

“This was our fourth season,” DeBoer says. “It’s the first transition from season to offseason that we’re not scrambling and completely flustered about what we’re going to do in December and January.”

Over the last few years, The French Twist has built up a rabid following of people eager to get their hands on everything from the aforementioned croques madames and duck confits, but also to sample their salads, frog legs, escargots and other French bistro items. Some people, DeBoer says, will approach the truck and be put off by the snails and frogs and think French food is out of their culinary comfort zones; but I’d say he’s doing yeoman’s work to simultaneously elevate casual French cuisine and make it approachable.

DeBoer says it’s important to provide people dishes they’re going to like; “You want to sell the fun stuff — the frog and the escargots and the duck, but some of that is somewhat of an acquired taste. If they come up and get escargots and they don’t like it, they’re not coming back. Really what we do is we steer them toward things that we know they’ll like.”

Certainly there are people among us who walk up to The French Twist and completely geek out that a food truck is selling escargots, and DeBoer says he can spot those culinary explorers from a mile away. But he’s also happy when a group comes up and says something along the lines of, “We’ve never had escargots, but we’d like to try an order.” For DeBoer to be able to offer them a sizzling plate of snails prepared the traditional way with garlic, butter and parsley, and prepared well, is to advance our collective community palate.

Still, DeBoer says, the top-seller is the croques madame, with good reason. And so when the “bigwigs from New York at the Food Network” told him to bring his best dish to the competition, they were surprised that, instead of bringing the unctuous goodness of the glorified ham and cheese, he brought a salad.

“Nobody brings a salad to a competition,” DeBoer says the execs told him. He replied: “You told me to bring my best dish.”

It’s hard to argue with DeBoer’s choice in preparing the Lyonnaise salad — his carefully prepared duck confit is caramelized with potaoes and sweet onions in the truck, heaped on a bed of mixed greens, and topped with bacon, swiss cheese, a house-made sherry vinaigrette and chopped parsley he flombés with brandy.

DeBoer was bound to secrecy at press time to say if he won the competition with his salad or not, but he says the reaction from the judges (about 300 lucky folks who got to sample his food and the food of three other trucks) was overwhelmingly positive.

“The people that voted for us were more food-nuanced,” DeBoer says. “They’re talking about the flavor profile of the dish. ‘The fattiness of the duck is perfectly cut with acid and sweetness of the sherry vinaigrette.’”

As with all food pioneers, we benefit from the risks they take. Now not only can we sample the food DeBoer makes (he and Louise will be at Odd13 Brewing in Lafayette almost every weekend this winter), but we can glean some of his culinary genius through cooking classes he’ll be teaching over the cold months.

To know something, is to love something, and I certainly fell in love with The French Twist when DeBoer gave me a tour of the operation so many years ago, and through his classes and food truck, you’re liable to fall in love with DeBoer’s brand of casual French food, if you haven’t already.