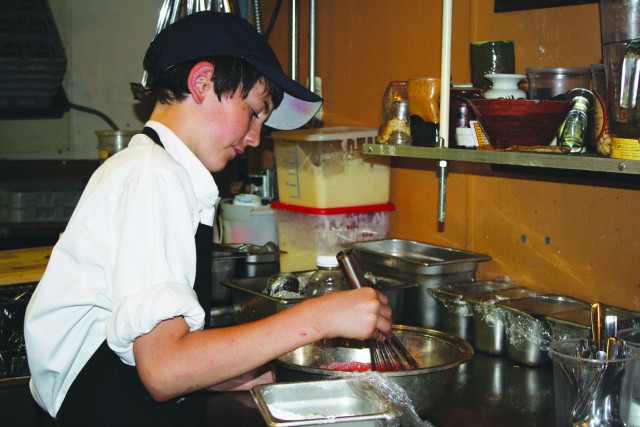 Aaron is 14 years old. He began his foray into the world of food two years ago when he discovered the Food Channel. Since then, he has read countless books by well-known chefs like Thomas Keller and Grant Achatz, scanned the Internet for plating concepts and menu ideas, coordinated a Junior Flatiron Chef Competition at Q’s restaurant, and begun interning at Black Cat.

Aaron has been working at Black Cat since June and has had several dishes featured on the menu, which, he admits, has inflated his head a bit.

“I definitely have an ego,” says Aaron, “but I feel I have the talent to support it now. However, a good chef needs to be humble … I’m still working on that.”

That talent has risen under constant support from Aaron’s parents, Tracy and Jan Kirschner, who say they couldn’t be more thrilled with their son’s accomplishments. That enthusiasm is understandable when they get to see the joy their son gets from cooking, not to mention enjoy the meals he cooks at home involving sous vide salmon or braised beef short ribs.

The staff at Black Cat has also made an effort to encourage Aaron’s skills by pushing him hard and avoiding preferential treatment. Questions like “Junior, what are you doing over there?” and “Junior, don’t wander around in here, what do you want?” are voiced frequently in the kitchen, but Aaron, or Junior, accepts the orders and questioning as part of being an intern.

“They definitely treat me like I am one of the team,” Aaron says. “I don’t know how a 14-year-old is normally treated, but they respect my ideas and definitely expect more out of me than from some of the other interns.”

In fact, Aaron was recently named manager of the interns, giving him the opportunity to teach some of his skills to other aspiring cooks, all of whom are older than he is.

Aaron tends to brush off comments about his age — very reminiscent of the young teen who insists on being 14-and-a-half rather than merely 14. When patrons of Black Cat stop him as he walks into the kitchen, asking whether he is head chef Eric Skokan’s son or commenting on how young he is to be cooking so well, Aaron responds, “Well I’m 14, but I don’t know if that is young.”

Aaron says he believes age should not hinder the development of a refined palate. When his younger brother, Ezra, came into the restaurant for his birthday, Aaron created a dish designed specifically with his brother in mind. The dish included hamachi sashimi, compressed watermelon, pickled watermelon rind, and chili-infused mango. Though this may seem beyond refined for a young boy, Aaron refuses to allow his younger brother to eat things like Kraft Macaroni and Cheese.

The boys were raised to have better taste than most kids and even some adults. Aaron’s parents often let their children order off the regular menu at restaurants instead of what they call the “dumbed-down” kids’ menu. The kids were also encouraged to be adventurous in their food selections and to be accustomed to finer ingredients. In fact, when Aaron was 7, his favorite food was caviar.

Despite Aaron’s prodigious skill in the kitchen and fully loaded workweek, his parents say he is still very much a 14-year-old kid, though his mother occasionally has to tell him to “keep his kitchen mouth in the kitchen.” Aaron has online home schooling each week, goes out with his friends, and occasionally gets grounded, much like most boys his age. He even recently saw the final Harry Potter movie, though he says he spent the majority of the movie thinking about how closely Voldemort’s head resembled the goat testicles they had just gotten in at the restaurant.

Though Aaron is very young to be working 40-plus hours a week in a line of work known for producing more burnouts than success stories, Jan Kirschner is not concerned about Aaron’s future.

“Even if Aaron decides not to become a chef, he’s achieved that excellence, and he can apply that to whatever he does decide to do. If he burns out at 17, the worst that will happen is that he will eat well for the rest of his life and will have a skill that will really impress girls.”

As for the future, Aaron hopes to work with either Achatz at Alinea in Chicago or Richard Blais in Atlanta over the winter break. He is also working to set up another competition, this time against another Black Cat intern, age 16.

Aaron says he is planning on staying with Black Cat as long as he continues to constantly learn and grow as a chef. He’s also hoping to graduate to the sauté station soon, though he admits it can be a bit dangerous with flying oil and hot pans.

To follow Aaron’s culinary adventures or drool over some of the dishes he has cooked and plated, visit his blog at www.aaronfood.blogspot.com.