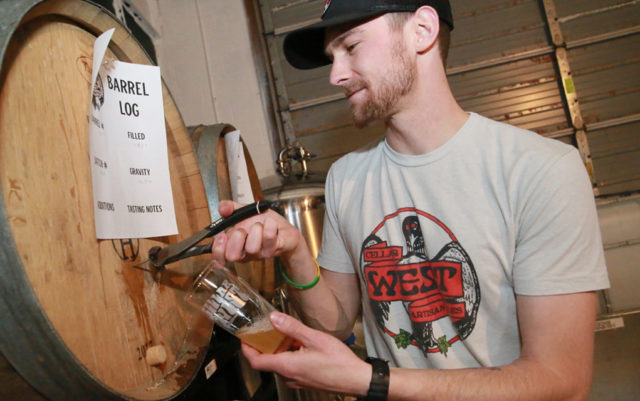 If you’re a dedicated craft beer drinker, it’s going to happen sooner or later. No matter your poison, be it India pale ale, stout or saison, it’s going to happen: you’re going to drink something fermented with Brettanomyces, and your understanding of what beer is and what beer can be is going to change. For some, that won’t be a particularly pleasant experience, but for the rest, it’ll knock down the walls of preconceptions and assumptions with sour and funk.

But what the heck is Brettanomyces and what’s it doing in your beer? Simply put, Brettanomyces — or Brett, as it’s commonly notated — is a yeast strain that grows naturally on fruit skins. Yeast not only converts sugar into alcohol and carbon dioxide, but it also produces a wide variety of flavors and aromas depending on the strains used. Nowadays, brewers typically use one yeast strain to ferment their beer, but back before brewing became a sanitized science, any number of yeast strains would turn up in a batch of beer. In particular, Brett spoils certain beers while greatly improving others. This phenomenon was investigated and eventually isolated by British scientist N. Hjelte Claussen, allowing him to name the yeast: Brettanomyces (Greek for “British fungus”) claussenii.

Brettanomyces claussenii isn’t the only strain of Brett — Brettanomyces bruxellensis is used for second fermentation in Belgian beers, while Brettanomyces lambicus is used for, you guessed it, lambics — but for drinkers, the various strains aren’t what you’re looking for, just the notation of “Brett” on your beer.

What can you expect from a Brett beer? Plenty. While most exhibit a sour nose and a tart flavor; others will exhibit spicy and smoky qualities. A few even have the distinct aroma of a farmhouse and horse blanket. Yes, those last two may not make your mouth water, but sometimes you’re just not in the mood for the same old same old.

Take New Image Brewing’s Dyad Kombucha Brett Saison, made in collaboration with Rowdy Mermaid Kombucha. Here the Brett combines the refreshing kombucha flavors of funk and sour with the zesty qualities of a saison.

Vision Quest — the place to go in Boulder for funky and off-kilter beer — has also been known to have a Brett saison on tap (theirs favors the pepper), as does Nighthawk Brewery in Broomfield (theirs is brighter and more tropical in nature).

Plenty more Colorado brewers favor Brettanomyces in all its glory — Black Project, Cellar West, Crooked Stave, Odd13 and the forthcoming Primitive Ales — and each brewer’s approach and use of Brett is what gives this particular yeast strain a specific sense of space. A super clean and crisp lager may quench your thirst, but it’s not going to transport you to the woodshed behind your grandpa’s barn. Brett can do that; it’s the building block for wild and indigenous ales and where beer drinkers turn when they need something left of center.