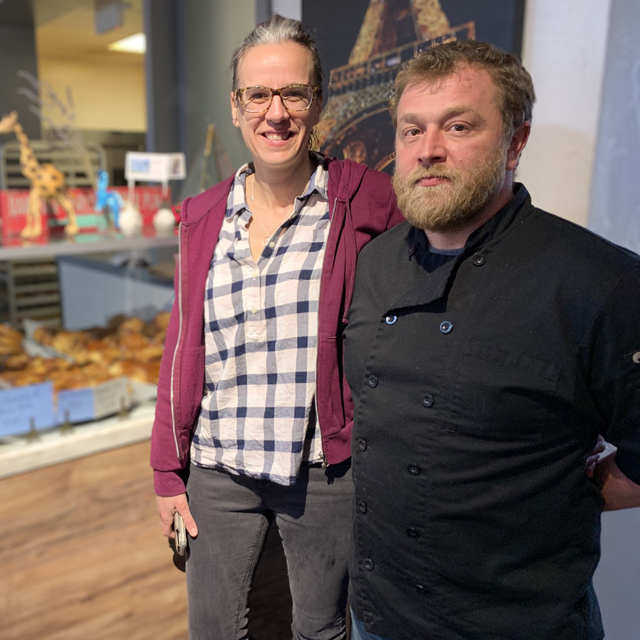 Agnes and Quentin Garrigou, the husband-wife owners of Boulder’s Le French Café, grew up around food. For, they are French.

“Food is so important,” Agnes says. “Like me and my family keeping for five hours at the table, you get outside and walk and come back and eat again. … Don’t do Christmas with French people, you will not go to bed before 3 a.m.”

Agnes remembers her dad catching rabbits in their countryside home in the Alps outside Chamonix. He cured meat in the basement, Agnes’ mother cooked sausage with cabbage.

“The smell, I still have everything in my head,” she says. “When I was young, people used to do everything by themselves.”

Fortunately, Agnes and Quentin (who serves as head chef) use a lot of those recipes at Le French Café. Sandwiches, quiches, salads, pastries and select entrees are born from their experiences growing up and eating throughout France. What makes Le French Café a gem, though, is the casual, vibrant atmosphere inside the restaurant — colorful décor, families sharing meals, French speakers all around — and the accessibility of the cuisine, both in cost and in form.

“We really wanted a place where people could come and feel comfortable. It’s simple food… it’s what we were eating when we were young,” Agnes says. “Most of our customers love our food, but some people still don’t understand why we’re not having truffles or foie gras. But in France we don’t eat that every day. We wanted to show people you can eat simple, good food.

“If you put butter inside, everything is good,” she adds, laughing.

Agnes and Quentin moved to the U.S. 10 years ago, settling in Florida for a time. But Boulder, similar in climate to Agnes’ Alpine upbringing, was always on their radar. When the chance to open a restaurant came up they jumped at the chance.

Now they, and their young son, are using the restaurant to build a community.

“For us, it’s like we are not at work, we are at home, because we have no family than us here so our customers become a little bit of family,” Agnes says. “I know it’s cheesy to say that but it’s the truth. It’s just we are so alone in America because we are just the three of us. We build our own family with our business and our customers.”

Agnes gives back to that community not only through her and Quentin’s food and restaurant, but through spreading goodwill. She’s embraced what she recognized as a uniquely American positivity, and she goes out of her way to share it.

“I believe in kindness,” she says. “You can see somebody on the street, a customer, who just changed her haircut… you can tell her she’s beautiful and it makes her day. It’s so important to do it. Where we live right now, what we are right now… it’s important to be kind to each other.”

Quentin and Agnes Garrigou weren’t able to take everything from their French culinary upbringings to the U.S.

“Like rabbits,” Agnes says. “You never find rabbits in America. When you raise rabbits in a good way, it’s so good — the texture, everything… But when we moved to America, we would go to the store and ask for it and they would look at us like we were crazy people.”

Quentin says he misses France’s regional charcuterie — rillettes (cured fatty pork) from his native Loire Valley — and fresh, funky cheeses that lose their, well, freshness and funkiness when shipped overseas. He reminisces about the simple pleasure of fresh blood sausage with potatoes and apples.

Foie gras is also becoming less available in the U.S., compared to France, at least. One meat that’s no longer available (easily) in either country? Horse. Agnes remembers horse-specific butcher shops in Paris, and seeing horse tartare on menus, heralded because horse meat was supposedly the healthiest meat.

“We tried to ask for that in a store in America, I think they were almost putting us to jail,” Agnes says.

Agnes says any changes from original, family recipes on the menu of Le French Café were made mostly because of a lack of access to traditional ingredients, though substitutions for flavor have been made.

“We have some stuff we had to change like the vinaigrette; we make it a little thicker, and we put onions inside, so it’s a little American but it’s still pretty French. The salads don’t taste the same; it’s more earthy in France than here… I think because here the salad you buy is in big quantity.

“But the duck confit we do tastes exactly like in France,” Agnes says. Check out the recipe on the next page.

Chef Quentin Garrigou offers a traditional take on duck confit, a classic French dish made from cooking duck meat slowly in its rendered fat. He uses simple seasoning in this recipe, as is traditional, but says you can add herbs (rosemary and thyme) before submerging in fat, and recommends serving with something sweet (say, a red wine reduction or fresh fruit). Recipe can be scaled up — you just need enough duck fat (which you can by canned in stores) to submerge the meat.

2. Salt and pepper duck, and place skin-side down on high-rimmed baking sheet.

5. Remove duck from oven and place tray (or transfer to smaller plate) in refrigerator.

6. After fat congeals in refrigerator (8-24 hours), heavily salt the skin-side of the duck and sear on grill. Reserve the fat for other cooking purposes.

7. Serve whole or shave with knife.