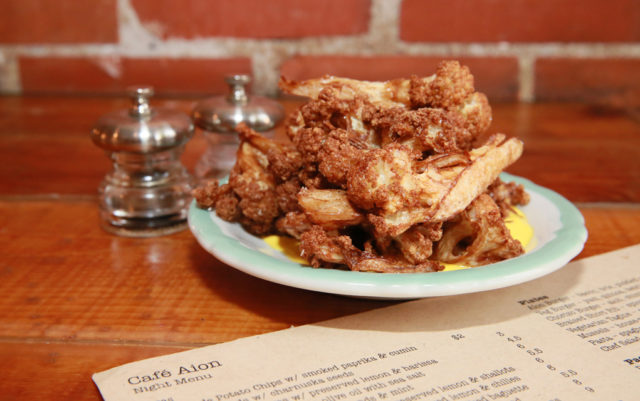 Though he owns and operates five of the most successful restaurants in Boulder County, and a catering company, and a farm, Three Leaf Concepts owner Lenny Martinelli still has to wash dishes.

“I think I’m still one of the best dishwashers around,” he says. “And I’m always teaching people how to wash dishes.”

It’s a fitting thing for Martinelli to “brag” about — though his Dushanbe Teahouse, Zucca Italian Ristorante, The Huckleberry, Leaf Vegeterian Restaurant and Chautauqua Dining Hall are constantly packed, Martinelli himself keeps a low profile.

“I don’t purposely [avoid media attention],” he says. “It’s just not my thing. I’m really not in this for that. Now, many people who are in marketing and are managers are like, ‘Lenny, you need to do better with that kind of stuff, you need to get out there and this and that.’ And they’re right… it’s just not what I’m about and what we’re really about.”

So what is Lenny Martinelli about? He’s modest, for one — he’ll be the first to tell you exactly how good each of his restaurants are, but also what they’re not. He’s also got this funny trait, especially in a world inundated by froofy food language and self-important mission statements: candor.

“I like to earn. I’ve always liked to earn,” Martinelli says of what drove him into the restaurant business. “When I was 15, my dad had a shop on the Pearl Street mall. A card shop. And he came to me one day and said, ‘Hey do you want to get a job?’ and I said, ‘Sure, I’ll get a job.’”

The iconic New York Deli was across the street from his dad’s shop, so that’s where he got a job, washing dishes. He did that for three years through high school.

“I loved it. What I liked about it was making money,” Martinelli says. “You know I’d never made money, I’d never had a paycheck before. It was my first paycheck, and I don’t know if you remember getting your first paycheck, but it was like, woah, it was a big deal.”

Martinelli went onto college and got a degree in architecture from CU. He worked at restaurants throughout his time there, meeting his future wife while they were both bartenders at The Broker Inn. It wouldn’t be the first time that Martinelli would feel like the universe was going to marry him to the food industry. In fact, Martinelli credits his enterprise to serendipity.

Martinelli got his first opportunity to own a restaurant when a terminally ill friend offered him a sweetheart deal to buy his share of a café at Naropa University. That led to his management of the Dushanbe Teahouse — when the City of Boulder, after eight years of deliberating, finally decided to ask for bids to manage the project, it just so happened the president of Naropa was sitting in that monthly meeting for the first time and recommended Martinelli for the project (Martinelli won the bid). After that, he bought Karen’s Country Kitchen, which had fallen into disrepair, when a worn-out owner walked into Dushanbe’s kitchen and offered to sell it. And after failing at a vegetarian restaurant a decade prior, Martinelli says he felt compelled to launch Leaf after walking into a retail space and hearing the walls sing to him.

But just because the restaurant industry was calling him, it didn’t mean everything would go smoothly.

Martinelli says he had to open Dushanbe, his first stand-alone endeavor, on a tight schedule because it was a city project and foreign dignitaries were flying in for the opening. Everything that could go wrong, did, he says — the floors were painted the wrong color so the finished floors weren’t ready in time to even train the wait staff. On day one, there was a line out the door, down 13th Street, and up Canyon, full of people eager to see the tea house that had stayed in crates for eight years.

“It was actually insane,” he says. “We also opened on graduation weekend and the farmers’ market. And everyone’s like, ‘Are you nuts?’ And I said, ‘If we get through this first weekend, we’re going to make it,’” Martinelli says.

Make it they did, obviously, and the Dushanbe Tea House is approaching 20 years. In that time, his restaurants have developed into establishments that are unique from each other while being commonly delicious. Which is kind of incredible for a man who says he got into the industry because he liked making money. Surely a more introspective Martinelli, later in our conversation, would share what has sustained him in this industry and what propels him to continue opening restaurants.

But Martinelli also sees building a restaurant as his form of creativity; the outcome of his need to produce. Whereas many restaurants will either base their menu off the concept of the restaurant, or flip it, and create an atmosphere to meet the culinary direction of the chef, Martinelli treats each project holistically, making sure everything from interior design to management practices moves the restaurant in a singular direction.

It’s all part of what Martinelli credits to critical thinking, a concept he laughed off when he first heard about it in college, but one that he now relies on to manage his huge operation. The idea is that he tries to see every issue that arises from all sides and predict its outcome. That’s also an architectural idea — to see building designs not for what they’re going to become immediately but for what they’ll be in the future. When I point out the obvious symmetry between the way he runs his business and his background in architecture, Martinelli provides an example to prove the point.

“Nowadays when I start working on a project, I’m not thinking about what’s actually going in it, I’m thinking about what happens if this doesn’t work,” Martinelli says. “There’s this one wall in [the Dushanbe kitchen] that I designed for a four-foot rack. This was my first design in there. Oh man, I missed it by a quarter of an inch. … The wall is four-foot, but then what they do is they put on this wall stuff for cleanability and there’s these little edges that go in it, and I swear to god… this four-foot rack was about a quarter to a half-inch too big for this thing and I have never been able to deal with this because the racks don’t get smaller. I needed to make the space four-foot-one-inch, but that one inch would’ve taken something from over there and over there.

So maybe Martinelli is proof positive of the old adage that luck is what happens when preparation meets opportunity. He might agree.

“I have an awesome way, and my staff will say it’s not awesome, of being in the right place at the right time,” he says. “I think that’s been my entire career. I’ll walk in there and everybody will all be doing perfect for eight hours and that’s when they will have one mistake. People will say, ‘He just walks in and looks for stuff.’ But I just walk in and stuff bounces out, maybe that’s experience.”

For more of our conversation with Lenny, listen below.