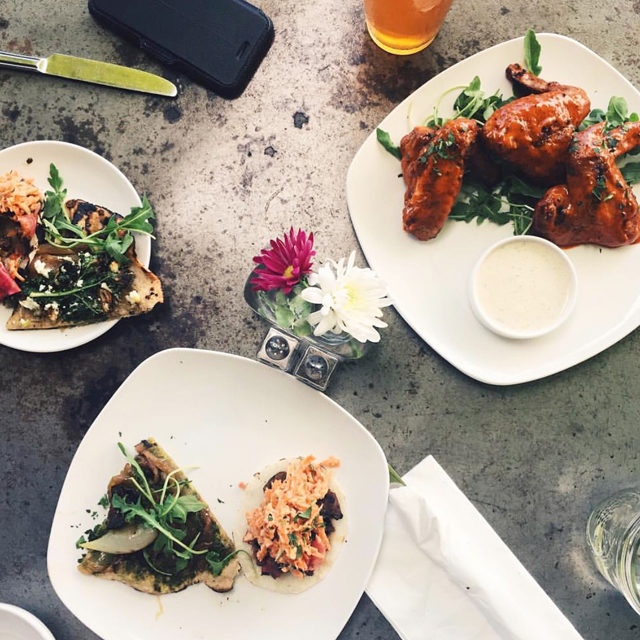 Launching Fresh Thymes Eatery in Boulder was the obvious culmination of Christine Ruch’s professional life. She had been a private chef, a restaurant chef, a culinary instructor in the field of holistic nutrition, and she had long harbored a dream to one day open some kind of restaurant.

But it was her personal experiences that formed the foundation of what would become Fresh Thymes, a comfortable spot that blends meals friendly to any number of dietary restrictions with sustainable sourcing, a casual environment and tasty food. Ruch had been diagnosed with multiple sclerosis and Celiac disease, and after moving to Boulder in 2007 with her husband, noticed there, surprisingly, weren’t a lot of places for her to dine out.

So, her professional and personal trajectories collided, and out blossomed Fresh Thymes.

“I thought it was important for people to eat according to their health values outside of their own kitchen, and I didn’t think it needed to be that complicated,” Ruch says.

Ruch drew on her background in culinary nutrition to create a menu that was gluten- and peanut-free and had plenty of options for vegan, vegetarian, paleo and keto diners as well. But, above all, she wanted the food to taste good, for those whose diets no longer allowed them to enjoy certain foods and for the casual diner with few or no restrictions that just happened to stop in.

“I wanted to break the myth that eating for health meant the food didn’t taste good or that you didn’t actually really like food. I think a lot of people think you’re not a real foodie and that’s just not true,” Ruch says. “So my dream was to have the everyday diner — wings, pizza and a pitcher of beer — to be eating next to a vegan or next to somebody with dietary restrictions, and they’d be eating the same thing. And the guy with the beer and pizza wouldn’t know.”

In order to make a limited number of ingredients mimic the flavors and textures of food items that aren’t served at Fresh Thymes, Ruch says she uses a few tricks. One might seem obvious now, but certainly wasn’t six years ago, when the restaurant launched: using nuts to mimic cheese.

“This is a great culinary trick, but it is a bit of a mind-bender to think about nuts as a dairy substitute,” Ruch says. “Today that seems a little more mainstream because you can get cashew milk or almond milk at the grocery store … but then to take that idea of nuts as dairy and go even further to make a cream cheese to make cheesecake, to make a frosting, to make a whipped cream. Any application you want to use diary for, you can use nuts for.”

Just because Fresh Thymes is gluten- and grain-free doesn’t mean Ruch shies away from making baked goods and breads. She admits maybe it might require some cognitive dissonance if you’re expecting a paleo or vegan baked good to taste and feel precisely like one made with grain and dairy, but the goal is “always to evoke the childhood memory of eating the thing you used to eat but you can’t eat any longer. Or, just be straight-up dang good.”

“It’s kind of a mind-set,” Ruch says of indulging in diet-specific sweets. “I can never have nuts [create the same texture as] gluten, they’re never gonna be that way, but it still just makes the sweetness that hits those memory profiles that satisfies your desire for something ooey-gooey decadent and makes you feel like you’re doing something bad, but at the same time I’m deceptively feeding you for health.”

Because Fresh Thymes doesn’t use eggs generally, and because eggs are important in baking, Ruch says she uses up to seven things to mimic eggs, including psyllium, flax and chia seeds, and never any artificial gums, acids or other substitutes you might find in a mass-produced vegan or egg-free product. Cassava flour and bean flour are also used, often in gluten-free breads, the latter being fermented like a sourdough to make a flatbread.

At some vegan or diet-specific restaurants, there’s a tendency to just substitute in meatless, eggless, glutenless, whatever-less ingredients into everyday dishes. Think tofu sloppy Joes or vegan, gluten-free mac and cheese or, gulp, fishless tuna. But Ruch says although you’ll find diet-specific alternatives on their burger, salad and pizza menus, there are also menu items that don’t exist anywhere else, and which were born out of accommodating those with dietary restrictions, like the Gold Bowl: coconut turmeric sauce, bean thread noodles, spicy Thai cabbage slaw, black sesame and ginger garlic chicken.

Fresh Thymes is also one of the only restaurants locally to offer a wine list of exclusively natural wines. (There will be a natural wine tasting event at Fresh Thymes on April 16 at 6 p.m. during Colorado Natural Wine Week, if you’re interested.) Natural wines are a good fit for Fresh Thymes because they’re produced with organic grapes and made with little chemical or physical interference but possess bold, unique flavors.

Ruch says she changes menu items seasonally to accommodate what’s available from local farms. And if you’re curious about how to create dishes like those on Fresh Thymes’ menu, Ruch continues to teach cooking classes with a bent toward nutrition at the satellite Fresh Thymes Marketplace.