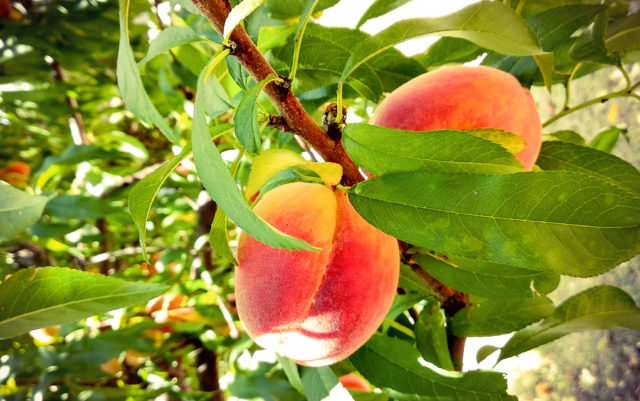 It’s peach season in Colorado. Walk into your neighborhood grocery store, stroll the lanes of your nearest Boulder County Farmers Market or peruse the menus of the areas locally sourced restaurants and you’re likely to find one ingredient spotlighted above all others, at least in August: the Palisade peach.

Peaches are grown worldwide in varying climates, but there’s something about the hot days, cool nights and wind-swept microclimates of the Western Slope, specifically the orchards in and around Palisade, that create succulent, tangy, unique fruit. In short, all the fuss about Palisade peaches is deserved.

Peaches represent at least three-quarters of Colorado’s total fruit production annually, and there are plenty of peach festivals from Lafayette’s (August 17) to one in Palisade (August 15-18) that celebrate the stone fruit. Lost in all the hullaballoo is the story of how the peach almost vanished from the Centennial State as quickly as it arrived.

The first peach trees were planted by John Petal Harlow, one of the first settlers of European descent in the Palisade region, according to Palisade Peach Festival information. Harlow planted dozens of crops and fruiting trees in the Grand Valley in the early 1880s to see what would grow in the high country climate. His first experiments with peach trees were failures — all the trees died almost instantly. But by fertilizing the soil with burnt bones and leached ashes, the trees began to fruit and flourish.

In a few short years, Harlow was able to cultivate peaches that earned him accolades across the state, and his crop of five tons of peaches was a marvel. Harlow helped create a canal system that took water from the Colorado River to help cultivate the fruit in such a dry region.

Harlow’s success encouraged others to build bigger orchards with other crops in surrounding areas on the Western Slope, according to Joyce Sexton, the former secretary of the Colorado State Orchard Mesa Research Center. In 1883, William Edgar Pabor planted apples, pears, peaches, plums and grapes in one of the biggest orchard systems of the time near Fruita. Others followed suit, but after harsh winter weather wiped out a 110-acre peach orchard, growers focused their operations closer to the well-suited soil and climate of Palisade, where cool air from the canyons help maintain a suitable growing temperature.

Shortly thereafeter, according to the Museum of Western Colorado, the growing community held a Peach Days festival to celebrate the crop. And, according to Sexton, the peaches drew attention from notable politicians like Howard Taft and William Jennings Bryan, who attended the festivities and were wowed by the product.

But, Sexton wrote, there was a massive decline in peach production in the early 20th century. While apples and other fruit trees took root, peaches succumbed to pest infestations and molding that pesticides of the day couldn’t eradicate. By 1925, most of the orchards, which had been bought by folks on the East Coast that didn’t have the time or will to invest in growing the fruit, were failing.

Then came DDT. That helped growers get rid of the moths that were ravaging their fruit, but, of course, DDT killed everything and posed dangers to growers themselves and the environment around wherever it was used. Thus, the peach-growing industry changed over the following decades, and as DDT was replaced with relatively safer pest control, so too were the many neglected orchards with just a few that had dedicated farm teams.

Today, you can get all your peaches certified organic from the region, if you want. Though a specific mold, cytospora, has affected crop output in recent years, the industry is thriving due in large part to dedicated producers and a marketing effort that has made Palisade peaches nationally known.

Morton’s Organic Orchards is a good representative of the way the industry has changed out in Palisade. Dave and Mary Morton bought 10 acres in 1978, on which they grew two acres of peaches. After bringing their fruit to the Boulder Farmers Market for several years, they acquiesced to public demand for organic fruit. Despite most orchardists in the region calling them crazy for trying to grow peaches organically, they made the switch, and by 1996, they were certified organic. Morton’s recently purchased the 4,000-tree Aloha Organic Fruit orchard in Palisade, making them one of the largest organic peach growers in the state.

What makes growing peaches organically so important is that crops with thin skin, like peaches, celery and blueberries, absorb more pesticides and chemicals applied to them than crops with thicker skin. Those pesticides get passed into our bodies.

What’s also unique about the Morton’s operation is that they grow varieties of peaches that can be harvested into September, far longer than in other growing regions. On the Aloha plot, 14 varieties of peaches are grown with different characteristics and fruiting periods.

Peaches, by the way, have more variety than yellow and white. First, the peach is really a tree, and we call the fruit of that tree either a peach or a nectarine (the former has fuzz, the later doesn’t, due to a gene variation). In the peach fruit category, there are yellow and white peaches, yes, with yellow being tarter, but you can also divide them into clingstones and freestones — in one variety, fruit clings to the pit, and in the other, well, you can take a wild guess. And then, just like apples, there are different varieties of peaches, both clingstone and freestone, white, yellow and even purple, that have slightly different tastes and textures.

Once you pick a variety, you can do whatever you want with peaches — eat them raw, bake them into pastries, grill them, can them, freeze them. If you don’t like the skin, blanch them in boiling water for a minute and dump them in an ice bath. To freeze, Colorado State University recommends selected firm, ripe fruit and adding a dose of ascorbic acid for better quality.

Stop by the Lafayette Peach Festival (August 17, 9 a.m.-4 p.m. in Old Town Lafayette) to claim your share of over 30,000 pounds of organic peaches from Morton’s, Red Fox Run and Tate’s Orchards. And as you’re biting into a fresh, organic peach, take a minute to think about how far our beloved crop has come.