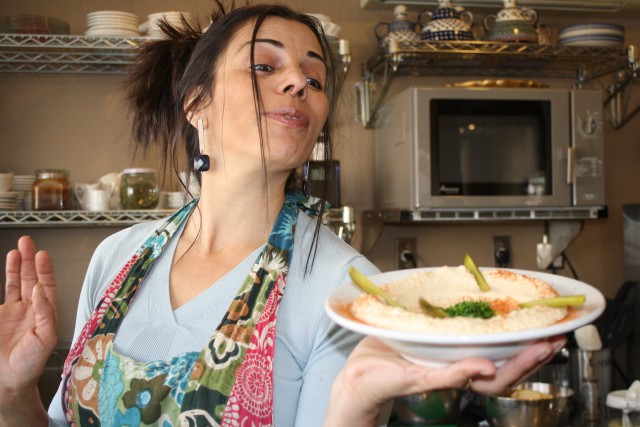 In a foodie town with freight engines like Frasca, Centro and The Kitchen, it is easy to get overshadowed. Yet with optimism, family support and fresh, authentic food, restaurants like Il Pastaio and Arabesque exemplify the little engine that could. Despite the odds stacked against them, the owners of both have created small, family-run restaurants that have gained a large following of admirers.

“[The] restaurant business is very difficult,” says Giuseppe Oreamuno, Il Pastaio’s chef and owner, “but people [are] very nice, the customer makes you push, they motivate and support you.”

Oreamuno was born and raised in Costa Rica, but fell in love with Italian food while studying in Pisa. He eventually left Costa Rica to, as he says, “go fly,” and began his cooking career in the U.S. He has cooked in places like Miami and Hollywood, but eventually made his way to Boulder. After 12 years, Il Pastaio is still turning out fresh pasta and sauces to feed hordes of hungry customers, despite having no marketing strategy beyond a website and a few social networking pages. “It is all about word of mouth,” Oreamuno says. “People love it. People come with their own jar and say, ‘Put your sauce in my jar,’ and then they take it home and tell others.”

The walls of the pasta factory display a family art gallery of sorts, with paintings and pictures by Oreamuno and his family members. Oreamuno’s wife, Marta, who Oreamuno refers to as the “big boss,” also works at the restaurant.

Manal Jarrar, owner of Arabesque, a Mediterranean restaurant that opened in 2009, has a similar family dynamic, with her children and her husband all occasionally lending a hand.

“They help, but I am the boss here,” Jarrar says. “It is a good balance, though. With the kids, I never push them to help, we do it with a mutual and respectful relationship.”

Jarrar’s marketing strategy is similar to the one at Il Pastaio — get a few people to come and love the food, and the word will spread naturally.

“Every dish matters to me,” Jarrar says. “I don’t cook anything I don’t love. So now, everyone wants to come try it. It is like its own community. Everyone who comes loves Arabesque, and Arabesque loves everyone.”

Unlike Oreamuno, Jarrar did not have experience cooking in or owning restaurants before opening Arabesque. Though she grew up watching her Palestinian family members cooking constantly, she never had the urge to follow in their footsteps until she became a personal chef six years ago. Then she quickly decided she wanted a restaurant.

“People think really seriously about opening a restaurant, it’s a big responsibility,” Jarrar says. “Not me. In my case it was just ‘OK! Now I am ready to open a restaurant.’ I had no idea about food or restaurant industry, so I just made it have subtle, not obvious, elegance and made it the way I feel it, the way I sense it, the way I smell it. Fortunately people like it. Sometimes it gets too busy!” Despite the difficulties behind running a busy restaurant in a small space, the owners of Il Pastaio and Arabesque set unconventional hours to leave time for family and relaxation.

“We close on weekends because the life is too short,” Oreamuno says. “We had to enjoy it too. Just working, it’s too much. Monday through Friday works great for us.”

Jarrar only opens for breakfast and lunch, both to leave time to be with her family and because she believes lunch is the most important meal of the day. Jarrar also keeps an optimistic attitude to help her through the lunch rush.

“Everyone has their part, and the restaurant is a stage,” she says. “It is busy, but it is just so much fun.