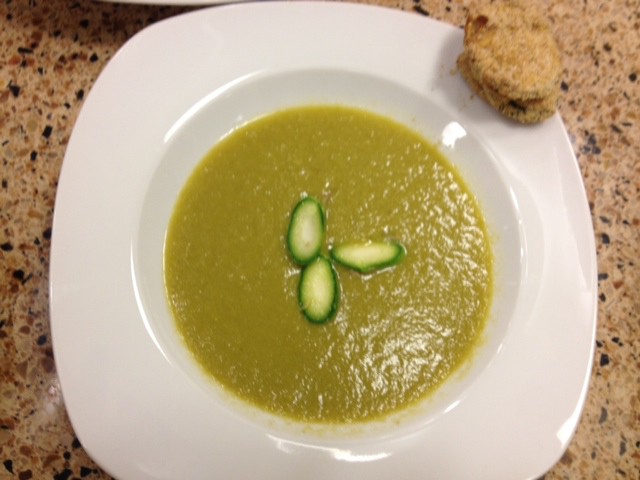 For Front Range gardeners, nature lovers, foodies and road runners, the mark of spring may be better indicated by the first sighting of wild asparagus sprouting up beside roadways, in irrigation ditches and along fences than whether or not Punxsutawney Phil saw his shadow in early February.

You may be one of the many super foodies who rise at the crack of dawn to make it to the Saturday morning Farmers’ Market before the fresh-picked asparagus is sold out, a gardener eager to begin growing the perennial or a locavore who wants more info on the where and why of local asparagus. Regardless of your personal interest and affection for asparagus, it’s fun to note that asparagus is much more than a vegetable that jokingly compromises the scent of urine in up to 50 percent of the population, prompting French novelist Marcel Proust to famously write in 1913 that asparagus “transforms my chamber-pot into a flask of perfume.”

Asparagus has a rich history. It was first cultivated by Arabs sometime before 710 AD, when it is known that Muslims brought it to Spain during the conquest of Iberia. Asparagus, hailed by many as a “rite of spring,” boasts high levels of many vitamins and antioxidants. Historically, it has also been used as an aphrodisiac, which may be attributed to its phallic-like appearance.

Here in Colorado, the perennial asparagus plant grows freely and wildly and can also be found at farmers’ markets around the state. In some regards, asparagus is similar to tomatoes in that it does not travel well and should be purchased seasonally and locally. Asparagus begins to lose firmness, flavor and nutrients as soon as it is harvested.

From a nutritional standpoint, several studies suggest that eating asparagus may contribute to good health.

“Asparagus is loaded with fiber, foliates and antioxidants,” says Stephanie McCubbin, a registered dietician and a healthy eating specialist for Whole Foods. “It’s one of the top vegetables for antioxidants, which is really exciting because it’s also delicious.”

Asparagus contains anti-aging properties and is a natural diuretic, which rids the body of excess salt, explains McCubbin. It also may help protect the body against cancer.

To add to that list, asparagus is also nutrient-dense, loaded with anti-inflammatory properties and contains asparanin A, which helps protect the liver and may protect against liver cancer, says Lisa Turner, a holistic nutritionist, food writer and founder of inspiredeating.com. Turner also says asparagus helps the body make glutathione, which some consider the master antioxidant. Finally, asparagus is alkalizing and helps combat the levels of acids that many Americans have in their bodies due to diets high in meat, sugar and refined grains — as well as stress.

“Like many people and as a foodie, I love asparagus,” says Carol O’Meara, horticulture entomologist for Colorado State University Extension Boulder County. “There are great varieties, it’s so good for the American diet and I just love them on the grill.”

It’s great when something that does the body so well tastes so dang good. Yet many asparagus eaters limit their preparation of the vegetable to grilling or steaming. While both are options, there is an enormous range of how to use it, says Turner, who grew up eating canned asparagus and has subsequently spent years creating innovative and delicious ways to prepare fresh asparagus. It can be cut raw in thin slices and tossed into salads. A vegetable peeler can be used to shave long strips from the stalks and then tossed with a salty cheese, such as parmesan, cherry tomatoes, pine nuts and a light dressing made from olive oil, basil and fresh lemon juice to fashion a salad that Turner describes as simple and beautiful. It can be cut into little pieces and added to scrambled eggs to create an easy, fast and healthy breakfast. Finally, Turner suggests roasting asparagus, which really brings out the flavor. She warns against over-roasting, as heat diminishes important nutrients, and suggests tossing asparagus with olive oil and roasting it at 400 degrees for seven to 10 minutes. She then suggests sprinkling the asparagus with black salt, which is not only delicious, but creates a visually appealing dish.

Growing your own
Now that you have a few tips on how to prepare a spring favorite, your green thumb may be aching to add asparagus to your garden. O’Meara shares her how-to on preparing, planting, caring for and harvesting asparagus.

The first and most important thing to consider when planting asparagus is that it is a perennial plant, so its location needs forethought and consideration, explains O’Meara. Pick a place that receives full sun, is out of the way and can provide a permanent home.

An asparagus patch can be created either in the early spring or early fall. If beginning in the spring, it may be a little “pokey” to start and you’ll likely want to wait an extra year before harvesting. Fall may be a better time to begin, but O’Meara advises gardeners to start at least six weeks before the ground freezes.

When you purchase asparagus crowns, expect them to look dehydrated. To rehydrate, soak the crowns in room temperature water for a few hours. Once rehydrated, trim off any roots that appear broken or dead.

Amend the soil with a couple of inches of plant-based compost and mix thoroughly. Plan for about three inches of compost for every 12 inches of soil. Dig a trench four to five inches deep and be mindful that the roots will need space to flare out.

Space asparagus crowns about 18 inches apart and cover with only two inches of soil. Continue to add topsoil throughout the growing season, but do not add too much or cover completely, as the asparagus plant is easily smothered.

Plan to apply a nitrogen-based fertilizer when growth starts in the spring and again right after the harvest.

Do not over-water, and protect the plant from pests, such as the asparagus beetle. Sticking a finger in the soil to see if water is needed can prevent over-watering. The soil should be consistently moist but not water-soaked. The asparagus beetle is scarlet red, easy to spot and large enough to hand-pick from the plant. You can crush it to prevent further infestation, although the beetle does not usually create a major problem in this area.

Note that asparagus does not compete well with weeds. Hand-pull or consider mulching the area, which will help control weeds.

Be prepared to wait a few years before harvesting. Asparagus needs about three spring seasons to establish itself. When you do harvest, do not pull the spears from the ground — either use a knife or break the spear. Never harvest all the spears, as the plant needs to maintain some to photosynthesize, and never harvest spears that are less than pencil-size in diameter. Harvest season is over when the spears begin to decrease in size. Following the harvest season, the plant will produce an airy top growth with beautiful leaves. Do not cut this back as, again, it’s needed for the plant to feed itself through photosynthesis.

This recipe marries my favorite Greek salad and spring soup into one:

In a large pot, sauté asparagus, leek and garlic in a little vegetable broth until slightly tender. Drain artichoke hearts and add those and olives to the pot and continuing sautéing vegetables for about three minutes. Add the remaining vegetable broth, salt, pepper and red pepper flakes and bring to a slight boil. Using an immersion blender, carefully puree the soup. Ladle the soup into serving bowls and garnish with sliced asparagus.