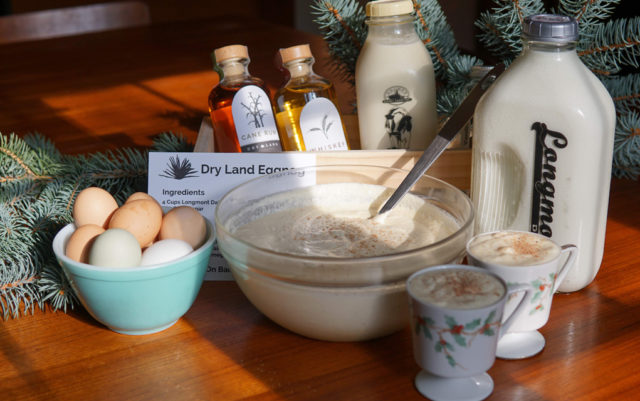 The folks at Dry Land Distillers in Longmont know how to buck a trend.

Nels Wroe, Aaron Main and Marc Staats had long entertained the idea of taking their homebrewing hobby and opening a brewery. Life got in the way, but when Wroe started working on a project to document the burgeoning craft distilling scene in Colorado and Wyoming, he brought the idea of opening a distillery to his partners. They subsequently left their brewing forays in their garages, and set a new path toward distilling commercially.

Unlike other distillers in the state, though, Wroe et al. wanted the spirits at what would become Dry Land Distillers to all be sourced locally and all be native to Colorado. That commitment resulted in an heirloom wheat whiskey, made with 2,500-year-old grain and aged for up to a year and a half in light- to medium-charred American oak barrels. It also resulted in another whiskey made with Antero wheat, a grain developed at Colorado State, designed to grow well in Northern Colorado.

And it resulted in Dry Land’s Cactus Spirit, a smoky, mezcal-like liquor made from native prickly pear cacti.

“We knew we really, genuinely wanted to represent Colorado in those spirits,” Wroe says. “The mountains in Colorado get a lot of attention but there are some gorgeous parts of Colorado in the plains and in the prairie, and we felt it was time to bring those native ingredients into spirits.”

Dry Land is the only distiller that makes a spirit from Antero wheat, and its Cactus Spirit is certainly unique. Creating these local spirits was done through trial and error — the heirloom wheat whiskey took seven iterations before they could develop a yeast strain that worked to bring out the proper elements in the distilling process.

And the idea for the Cactus Spirit was born out of a desire to make bacanora, a tequila-adjacent spirit made from the agave plant. When they couldn’t find agave grown in Colorado — and couldn’t find anyone to grow it — they turned to local cacti.

“I was hiking up Rabbit Mountain … pulling cactus thorns out of my dog’s paws,” Wroe remembers. He called a fellow distiller and asked if he could make a spirit “using something like cactus, and he said, ‘You’re crazy, so you might as well try it.’”

After sourcing the cacti, actually turning the prickly, fibrous pads into liquor proved to be a challenge, Wroe says.

“We had to learn how to smoke cactus at the right temperatures but also how to actually process them. They’re pricey. They’re painful. We were going through everything from burning up blenders and food processors to chopping them up with knives. Then we brought in a woodchopper.”

Since, Dry Land has released a gin — there were 22 failed recipes using local, native botanicals before a winning formula was found. Because gin needs some citric element, and because Colorado doesn’t really produce citrus well, the Dry Land team got creative and found enough acid in crabapples and rose hips to balance the herbal elements — spruce tips and juniper, among many others — in the gin.

One thing you can certainly can’t grow in Colorado is sugarcane, but Wroe says last year the team got the itch to make eggnog, which is classically composed of milk, cream, eggs, spices and spirits. Brandy (Cognac) is the traditional spirit to mix in, but rum is a close second. (Mixing in both is pretty darn good, too.)

So Dry Land made a rum, nixing their local-only credo by sourcing sugarcane from family growers in Louisiana and Florida. The rum has a vegetal, slightly earthy flavor because the distillers crush the sugarcane itself and incorporate it into the fermenting process.

Last year, Dry Land held a low-key eggnog contest — Wroe says he, Marc and Aaron had a friendly bet over who could make the best nog — and the response from patrons who happened to stop by and taste the entries was so immense that they decided to make a formal competition this year. The distillers at Dry Land will each produce an entry, as will guest mixologists Sean Gafner (chef/owner at The Roost) and Wes Isbutt (chef/proprietor at West Side Tavern). Guests can order an eggnog flight and vote for their favorite between Dec. 5 and 7 at the taproom (471 Main St., Unit B, Longmont).

Wroe shares some hints as to what made his the winner last year — farm-fresh, pasteurized eggs, with Dry Land wheat whiskey that imparts cinnamon and vanilla that was leached out of the oak in which it was aged. Wroe doesn’t add much sugar, relying on the sweetness of the rum and wheat whiskey to provide enough.

And if you think eggnog can’t vary much, leave it to Dry Land to provide variability. Some entries will be creamy and silky, other frothy and light, depending on how the eggs are separated (or not), how they’re whisked (or not), and how much cream is added. And Wroe notes that last year’s runner-up had espresso in it and that this year just might include an entry with caramel and chocolate.

“People are missing out on a great drink when they get the mainstream, pre-packaged eggnog,” Wroe says.

And if all this talk of eggnog has you inspired to make a batch at home (it’s easy, and you can even age it in your refrigerator for months to deepen the flavors), the ’Nog Off, as its been billed, includes the option to buy a package for $110, which includes Dry Land Wheat Whiskey, Holiday (aged) Cane Rum, whipping cream and whole milk from Longmont Dairy, vanilla beans and nutmeg from Savory Spice Shop, and more, so you can make your own concoctions, all with ingredients from local shops.