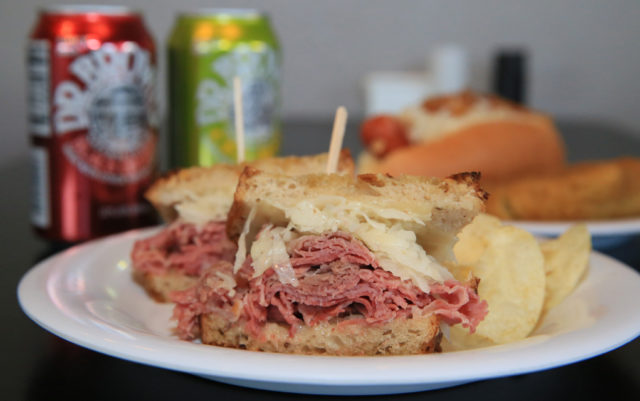 According to Steve Podel, a real pastrami sandwich should be like the one on the table in front of me.

The pastrami is quite juicy, not too chewy. The moist, thinly sliced smoked meat is piled on slices of dense rye bread smeared with yellow mustard and accompanied by sauerkraut and a pickle spear. That’s it.

And, says the owner of Longmont’s Brooklyn Deli, all of the components come from New York City.

“This is real pastrami. It costs me more but it’s right. If you went to Katz’s deli, this is what you’d get. It’s not ‘New York-style.’ It’s really from New York,” he says with emphasis.

As noon approaches, a line forms at the counter, and Podel in his apron greets each customer with a direct question:

Podel grew up in the working-class Canarsie neighborhood in Brooklyn and still speaks with its familiar, and stereotypical, accents. He is just a little opinionated, as only New Yorkers can be. Beyond the chopped liver, Podel admits that some expatriate Big Apple natives come in because they also miss that brusque take-no-crap attitude.

In the 1980s he cooked at Boulder eateries including Azar’s (now Ralphies), Jose Muldoon’s (now Fate Brewing) and Pearl’s (now West Flanders), where Podel and I worked together for a while. He moved back to New York to cook in the late 1980s but returned with his family in 1995.

“I wanted to open a place serving some of the things I missed from New York. If you could find it in Brooklyn or Manhattan, I wanted to have it on the menu,” Podel says.

So he offers Reuben sandwiches, eggplant parmesan, sausage and peppers, a classic Chinese pork sandwich with hoisin sauce, a Greek gyro with housemade tzatziki, and a pressed Cuban sandwich. To wash it down: an egg cream or chocolate soda.

Besides the pastrami, the rye bread is shipped in frozen from Queens. Even the pickles, mustard and sauerkraut are from New York along with eclairs, cheesecake, cannoli shells, black-and-white cookies and Acme smoked fish. Bagila’s square potato knish is a mouthful of spud comfort, served with tangy Ba-Tampte mustard.

Podel finishes and serves par-baked bagels — sesame, bialy and everything — from the Bronx. They are available frozen by the dozen if you ask nicely. Whatever you do, don’t request fresh bagels at 4 p.m. “Nobody eats a bagel at 4 p.m. in New York. That’s for breakfast,” Podel says with a certain level of exasperation.

He also bakes off poppy seed kaiser rolls for breakfast sandwiches. There are no pre-cooked egg disks. He cooks the eggs and meats including Taylor ham (or pork roll) to order on a flat-top griddle. “I’m a chef, not a fast-food guy,” he says.

In his sunny restaurant, Podel is the staff, along with a little help at lunch. He works the counter, cooks the food and cleans up. He is less than impressed with the current generation of cooks emerging in droves from a multitude of culinary schools.

“The Food Network made everyone a chef. I’m old school. Cooking school is great but the only way to really learn how to work in a kitchen is to spend time in a lot of them. You have to be tough,” he says. He has the scars, burns and injuries to go with the years at the stove.

Podel is justly famous for his soups. Along with daily specials, they allow him to use his culinary chops and creativity. On the menu this day is his classic creamy split pea soup with chunks of smoky bacon. Next up is Russian/Ukrainian sweet and sour beef and cabbage soup loaded with brisket.

Soup-loving customers favor the matzoh ball soup, real lobster bisque and the popular red gumbo, which has “everything in the world in it,” he says. “I post soups on Facebook. If they know I have gumbo, they will come.” His daily specials range from stromboli and banh mi sandwiches with kimchi to baked stuffed clams and chicken cutlets.

Podel laments the changes in local dining since he started cooking. “In the ’80s on Pearl Street, every store and restaurant was a ma-and-pa place, real local. Now the chains have moved in. There are a million restaurants down there but most of them are fancy, not places where people like me can grab dinner for a decent price,” he says.

After nearly a quarter-century of dishing the real thing, Podel still feels that the Brooklyn Deli is largely undiscovered country. “I don’t know why people who love this kind of food don’t get here. They say it’s ‘far’ away. Where I grew up you drove 90 minutes just to get Chinese (food),” he says.

The Rio Grande Mexican restaurant is moving its margaritas to 1701 Pearl St. — formerly Ted’s Montana Grill — while its longtime Walnut Street location is being renovated. The temporary Rio will be only doors away from the Rio’s original Boulder address. … After 17 months in business, Emmerson, the “neo-bistro,” has closed in Boulder. We’ll miss the yeasted waffles and the malted barley pavlova dessert. … Black Diamond Restaurant at 103 N. Public Road in Lafayette is closing Jan. 27 … R.I.P. 3.2 beer. I’ve ignored Colorado supermarket beer aisles for decades because of that weird, weak beer. That’s all changed with stores now stocking real beer. Besides the big brewers, Louisville’s King Soopers offers a pretty good local selection including beer from Wibby, Oskar Blues, Avery, Upslope, The Post and Lafayette’s Odd 13. Part of that deal is that liquor stores can now sell some food.

“There could be no picture making without pastrami.” — Orson Welles

John Lehndorff is a catering prep cook and host of Radio Nibbles on KGNU. Listen to podcasts: news.kgnu.org/category/radio-nibbles