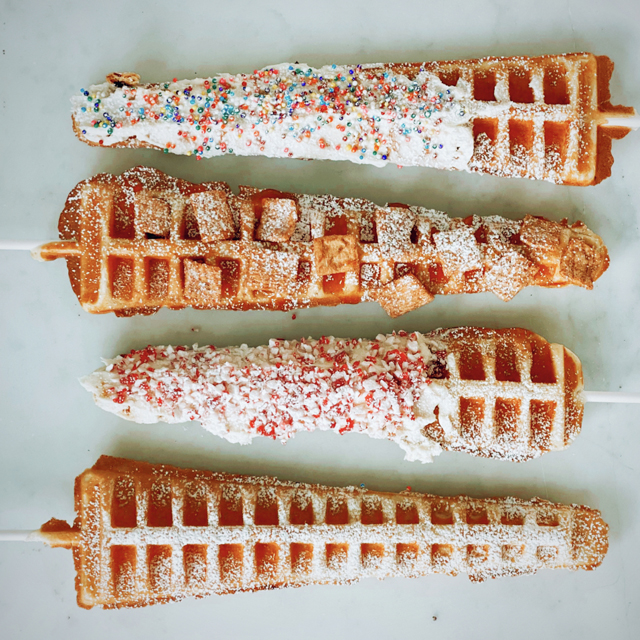 Louisville’s Neige LaRue thought she might get some skeptical glances when she opened a shave ice shop out of a walk-up window on Main Street last year. It is Colorado, after all, and the Hawaiian treat may go well with our blistering summer days, but for the other eight months… well, scraping ice off the car every day dampers the appetite for it, even if its smothered in delicious toppings.

Yet, Punch Buggy was a success in its first year.

“It was a wonderful first season, LaRue says. “Lots of repeat, loyal customers. Very quickly we were able to be on a first-name basis with so many of the people and kids who came by, almost daily. We feel like we got to know our community pretty well.”

Then, of course, the coronavirus came. But Punch Buggy’s walk-up format proved pandemic-proof; guests ordered at the front, picked up in the back, and the sweet treats flew off the ice block (so to speak) as people looked to get out safely. In fact, all seemed, dare I say, normal when the City of Louisville closed down Main Street and allowed LaRue and other restaurants to take over the street.

Now, winter comes. And with folks looking for warmer treats, LaRue is turning Punch Buggy into a pop-up waffle shop. You’ll be able to stop by for super-long waffles on a stick, loaded with your choice of toppings. And you can pair that with a hot cocoa if you want before, say, hitting Louisville’s outdoor skating rink.

“I wanted to be able to have something fun to do in light of current events, maybe provide a little bit of a distraction, safely,” LaRue says.

You can get the “Plain Jane,” a waffle with powdered sugar and syrup on the side for under $5; order a rotating special of the week; pick from some signature styles (Nutella, birthday cake, chocolate and strawberries); or build your own, all for under $6 — though, LaRue says, if a bold soul wants to build their own with everything Punch Buggy has, it’ll be $9.70. (Send us a picture, folks.)

LaRue taste-tested waffles for weeks ahead of the launch (officially with a soft launch Dec. 10-20, and a full opening Jan. 7). The mother-of-two has naturally had some eager guinea pigs at home to refine the recipe.

“We’ve been taste-testing all kinds of different recipes and concoctions,” she says. “It’s been fun to see the kids’ reactions and also think about flavor combos that’ll appeal more to adults.”

It didn’t take much to pivot to waffles from shave ice — some new ingredients and an investment in specialty sprinkles, which LaRue is excited for. She bought a specialty waffle iron, too, to make waffles that are stick-able. Overall, it’s a fun move from a local business in a not-so-fun year.

“If hopping in the car and going and getting this crazy, weird, new, great thing that no one’s ever seen before is what we can do for families, that’s great,” LaRue says.

Because 2020 is what it is, you can order your waffle pop for delivery via Door Dash. This iteration of Punch Buggy will be open Thursday-Sunday.