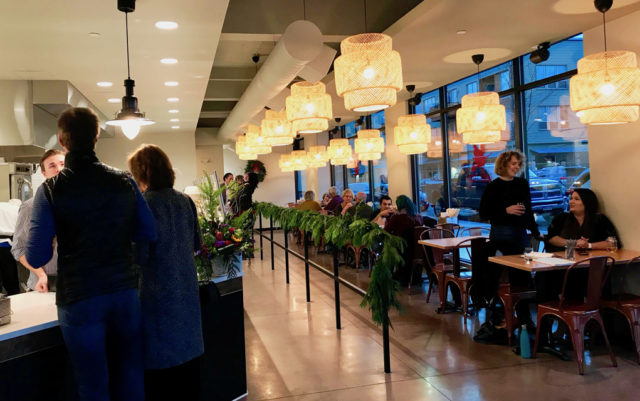 Matthew Jansen knows a thing or two about the Boulder County food scene. He grew up in Boulder, learned to cook in Boulder restaurants, and has run one of Pearl Street’s longest-operating and most successful restaurants, Mateo, since 2001. What he’s noticed, above all else, is change.

“We don’t have a lot of establishments that have been around for 20 or 30 years,” Jansen says, then adds, looking ahead, “It would take some really odd thought to figure out what’s going to really work moving forward in Boulder.”

But Jansen had one such odd thought recently — a lunch-focused restaurant in Boulder’s Gunbarrel enclave that brings the fine dining sensibilities of Pearl Street a little northeast. That idea materialized into Raglin Market, which opens Dec. 7.

It’s Jansen’s first foray outside of Mateo since he closed Radda Trattoria in Boulder about six years ago. He had decided that splitting time between two restaurants pulled him away too often from his family, especially his young son.

“Instead of having two restaurants and being ‘the parent always at the restaurant,’ I sold one and kept one but changed my schedule so I could be the best father and husband that I could be,” Jansen says. “My son just started kindergarten this year so all of a sudden I have the time to dive into some new projects.”

The idea of family has always guided Jansen through his culinary career. A journalism major at the University of Colorado, Jansen fell in love with the communal atmosphere a kitchen and restaurant can provide while working at the long-gone and dearly beloved Laudisio.

“I kind of got to grow up in a family restaurant environment, and I really never left it,” Jansen says. “Antonio Laudisio would introduce us to great food and wine, and we would sit down and have a family meal at the end of the shift and everyone would talk about food and wine and where it came from and share great stories.”

Working at Laudisio also afforded Jansen the opportunity to travel to one of the restaurant’s partner wineries in Piedmonte, Italy, where he worked harvests, helped in the cellar, ate meals made by “grandma or one of the locals” and, ultimately, fell in love with wine. At 21, the experience was formative for Jansen, and he compounded that first-hand knowledge with a sommelier certificate from the Court of Master Sommeliers.

Jansen bounced around a few well-regarded restaurants in California and Las Vegas, including Michael Mina in San Francisco, until the opportunities back home in Boulder became too great to ignore.

“I was living in San Francisco and traveling back to Boulder,” Jansen says. “A lot of friends and family said, ‘Hey why don’t you consider doing something here in Boulder?’ A lot of people that visited San Francisco and Los Angeles really loved the restaurants in those cities, and said we could use an additional restaurant similar to this or that in Boulder, and so I said, ‘Yeah, that’s probably true.’

“Growing up in Boulder, it was kind of fun to think about bringing something fun back to share with everybody, really, and just be part of a great restaurant community. It’s been really nice to watch it [grow] over the last 20 years.”

Jansen talks warmly about the restaurant landscape of the early 2000s — one that included Laudisio, of course, but also John’s Restaurant, Potter’s, Pearl’s, The Walrus Saloon and more. The reward for launching Mateo back then, and making it thrive, is that Jansen is now able to see how deep its connection to the community runs.

“The restaurant community is really tight-knit, so the guys that own The Kitchen and Next Door and the team over at Frasca, a lot of those owners actually started at Mateo, which a lot of people don’t know,” Jansen says. “We still frequent each other’s restaurants and collaborate on quite a few events and now we all have similar ties to the community.”

Perhaps seeing the growth of people who have worked within the walls of Mateo, and the enterprises that those people have created, is why Jansen has an optimistic view about the future of Boulder’s food scene, and why he doesn’t lament the change Pearl Street, in particular, has undergone in the last two decades.

“The east end of Pearl, where we are, was once, when we opened, you could say on the quiet side, and now there are all kinds of great businesses and food options all around us,” Jansen says.

The rapid rise of restaurants “has helped tremendously,” Jansen continues. “There are a lot of opinions out there, but it’s a great food scene and community. … Everyone’s loving the quality of restaurants, and shopping local, and supporting our local farms.”

But still, it’s Gunbarrel where Jansen has chosen to open Raglin Market, despite several available spaces near Mateo. In fact, Jansen wonders if he hadn’t launched Mateo before the wave of new development and restaurants in the early aughts, if he’d be able to make Mateo successful as a new restaurant today.

“It definitely would’ve been a totally different experience,” Jansen says. “Looking at some of the new restaurants, the landscape of Boulder’s changed tremendously with new buildings and construction, and then we have to always take into account rents and the cost of doing business, it would be a different ball game today just in terms of the cost of entrance and factors like that.”

Gunbarrel, with a large transient population of workers who live outside the community, presented the best opportunity for Jansen to expand — the idea with Raglin Market is to bring casual fine dining like that available at Mateo into the lunchtime hour, and to make it available quickly so people can get back to work.

What’s going to make it successful, Jansen says, is, fittingly, the family of employees and customers he builds.

“I’m trying to surround myself with… I kind of call it the ‘dream team,’” Jansen says. “The team that we’ve assembled, they’ve been at several of the best restaurants around town and they make my life I wouldn’t say easy, but easier.”

What else is family for anyway?