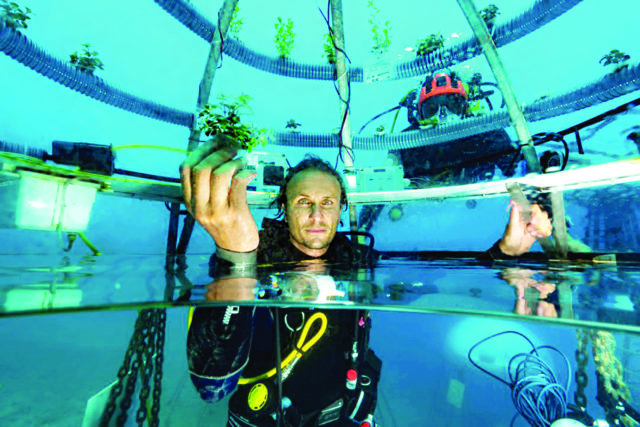 As the brilliant comedian and social commentator George Carlin once wisely said: “The future will soon be a thing of the past.”

In the world of food, dining, farming and grocery shopping, the future isn’t waiting its turn.

Here is a glimpse into the futuristic meals and technology that will change how we cook, dine, eat and shop in the next decade.

Take a bite of the meativerse

A Cambridge University research robot is capable of tasting salt and other ingredients in a recipe and adding more as needed. … Japanese researchers have created a set of electrical chopsticks that create a salty taste in the user’s mouth. … Under development: a TV screen you lick and taste a range of food flavors. … SpoonTEK is developing a smart spoon that uses an electric current to stimulate the taste buds and make food taste better. … Panera Bread is testing the CookRight Coffee system, a robotic coffee maker using artificial intelligence to monitor coffee volume and temperature using predictive analytics. … Betty-Bot robots are bringing orders to restaurant tables at the Marriott Fort Lauderdale Airport, while a robot at the AC Hotel Miami Dadeland delivers food from several restaurants to rooms. … Robot servers at Robotazia in the English town of Milton Keynes have humans assigned to deal with glitches like the robots’ tendency to malfunction when near people wearing heavy metal jewelry. … Cana Technology has introduced the world’s first molecular beverage printer using concentrated ingredients to mix more than 100 cocktail varieties at home.

Residents of Canberra, Australia, can order more than 250 of Coles supermarket’s most popular grocery items by on-demand drone delivery service. The drone hovers and lowers the package to the ground. … DroneUp is providing drone delivery from 34 Walmart locations in six states including Arizona. The top-selling drone-delivered item at one of these stores is Hamburger Helper. Seriously.

U.K. supermarkets are working on using AI age-estimating technology that checks the faces of customers buying alcohol. A recent survey from Piplsay shows 69% of customers believe grocers should inform shoppers when facial recognition is in use. … Philadelphia cream cheese installed a device to diffuse the smell of freshly baked cheesecake into the dairy aisle. … Instacart has announced it will cover tips that customers pull back after their orders are delivered, an offense known as “tip baiting.” … Minnesota-based company Recombinetics is set to sell beef from cows whose genes have been altered through CRISPR technology to tolerate hot weather.

Growing veggies on the ocean floor

The startup Nemo’s Garden was founded in 2021 to prove that herbs, fruit and vegetables can be grown in a sea floor biosphere greenhouse. … Kalera has opened a new automated indoor 90,000-square-foot vertical farming facility in Colorado. … Pepsi has created a limited run of cola-infused pepperoni to be served at pizzerias in select cities. No one is sure why. … Invest in cauliflower futures. Applegate’s Well Carved line of burger patties and meatballs have cauliflower and kale mixed in. Perdue’s Chicken Plus nuggets combine chicken with chickpeas and cauliflower.

Chotto Matte restaurants in London, Miami and Toronto serve a cocktail that can be paid for only with bitcoin. … New bitcoin-enabled kiosks from Coinstar aim to give grocery shoppers easy access to digital currency. … Shake Shack is testing a program that rewards customers in bitcoin when they use the company’s cash card. Chipotle has debuted its virtual restaurant in the metaverse on Roblox. Wendy’s unveiled the Wendyverse recently. McDonald’s has filed a trademark for a future metaverse eatery.

Recycling waste in a tasteful way

U.K. supermarket chain Morrisons has eliminated “use by” dates from 90% of its milk products and is advising shoppers to use the “sniff test” to gauge freshness. … Los Angeles now requires restaurants with 26 or more employees to remove single-use utensil and napkin dispensers and only include the items in takeout orders when requested.