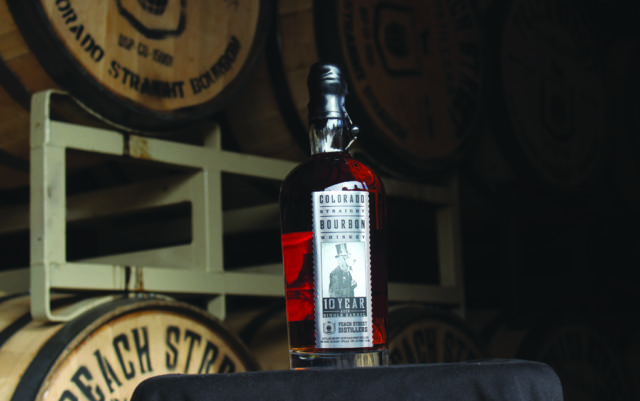 Resisting the pun, because its sad to see a good brewery go down, it seems kismet that Ska Brewing and Peach Street Distillers are taking over the Boulder Fate Brewing Co. location off Arapahoe. You’ve seen Ska’s cans, you’ve had its beer on tap, you may have even picked up a Peach Street — a sister company started by one of Ska’s founders — bottle of spirits at a liquor store, but you haven’t likely experienced the breadth of what Ska and Peach Street provide.

How many distillers in Colorado, for instance, have a giant rickhouse in which it’s been aging spirits for 15 years? How many distillers have 27 spirits to sell? How can a craft distillery even afford to make that many spirits without going belly up, and who’s driving that creation?

“It’s clearly a brewer’s distillery,” says Peach Street director of sales Dustin Lemoine from inside its forthcoming Boulder County outpost, still in the process of renovation. “Diageo owns all these brands, but they would never try to convince you that Hennessy should be making something other than Hennessy. This is what we do in craft beer. You trust a name, you’re like, ‘Oh, I trust Ska. They make 30 different flavors. If they make a citrus IPA, it’s probably good. I’ll give it a shot.’

“Peach Street had a similar idea. We had all these ideas, and we were out in Palisade, all of this agriculture’s right there. And so that might mean a farmer shows up one day and says, ‘You want two tons of plums? I’ll give them to you for 8 cents a pound.’ And you’re like, ‘Shit, can we make an eau de vie out of plums? Probably, let’s do it.’”

Ska and Peach Street can tell that story over a bar in Palisade or Durango, Ska’s headquarters, but it’s the chance to tell it on the Front Range that has them and local consumers itching for the brewery/distillery/restaurant to open (tentatively, in spring).

Ska and Peach Street have an ethos that aligns with Boulder County — it sources locally and makes products based on ingredients it gets only because it maintains relationships with local farmers. Like the plum eau de vie, or the smoke rye whiskey made from rye grown on a century-old farm in Colorado and smoked over peachtree wood cultivated from the company’s own orchards in Palisade.

“When you can control the experience from grain to a consumer’s glass …  people get it more, they get rooted in it, and they get the spirit of it. And that seems to be the direction of this company, putting down deeper roots in Colorado,” Lemoine says. “And the lifestyle aspect of it. I mean, it gets really cliché in the craft beer world, but they’re living it, they’re putting people and planet above profits. They’re maintaining a healthy company that doesn’t have grandiose desires. It doesn’t need to be this giant thing. It just needs to support itself.”

Its size also allows it to let spirits age. Peach Street has a lineup of clear liquids that haven’t hit its aging rickhouse at all or for only a short amount of time, which has allowed the company to make money while other spirits sit in barrels, and while the natural aging process sucks up sometimes more than half of what’s in the barrel into the wood or into the air.

Take, for instance, its 10-year bourbon, which Peach Street recently released. It’s a rye-forward whiskey that aged quicker than it would if it were barreled in Kentucky or Scotland due to Colorado’s unique dry climate. Large diurnal shifts — the temperature change between day and night — up to 40 degrees, means the wood is rapidly expanding and contracting, moving the spirit in and out and giving it more contact with the oak.

That large temperature shift presented an economic challenge, but, unsurprisingly, not one from which Peach Street backed down.

“You can go to Kentucky and look at these very drawn-out charts of, at 10 years you’re going to have this much loss at this humidity rate, and people dial in a percent of humidity to try and get this much extraction,” Lemoine says. “And [Peach Street’s bourbon] has been in a little, weird rickhouse in the desert, where there’s no background for it. We’ll open up that barrel at 10 years, we think that there could be as few as, you know, 150 bottles, when usually we get over 300 out of it. It’s like, what’s that going to be worth? So it was just the risk of laying it down.

“You know, when you’re a brewer, you play around with small-batch stuff. It goes wrong. Three barrels go down the drain. Yes, it costs some money, but if you do something stupid with bourbon, that’s three years, five years, 10 years old, you suddenly just throw away $10,000,” Lemoine says.

Peach Street has some barrels reserved for opening at the 15-year mark and a single-malt whiskey that should get bottled next year.

The new Ska and Peach Street location will feature a small still (alongside brewing equipment) that Lemoine says opens opportunities for small-batch spirits but also the chance for guests to, perhaps, participate in the distilling process. Too, the restaurant will feature vegan- and vegetarian-friendly cuisine (along with plenty of meat-based options) that coincide with the company’s ethics.

It’s an approach that worked out west, and Lemoine thinks will work on the Front Range.

“The Western Slope has been very kind to Ska and Peach Street, and in Colorado, when you talk to people on a chairlift or at a bar and you ask about the Western Slope, everybody’s got a story. ‘Well I passed through one time, I rode a mountain bike in Fruita,’” Lemoine says, but there is a gap between those one-off experiences and the fist-hand knowledge of what Ska and Peach Street have become. “I think what we’ve been doing over there for 25 years is really relevant on this side of the state. And Boulder … is a great place to share it.”