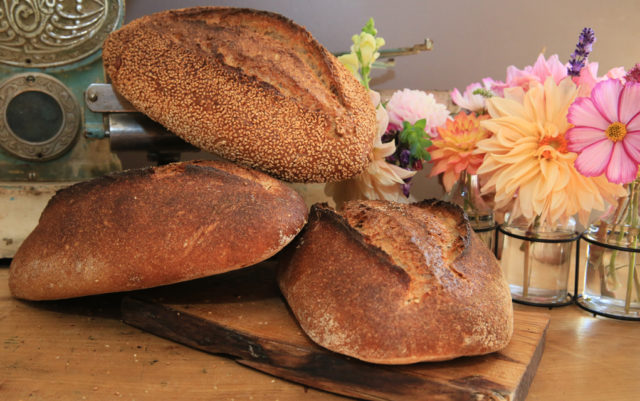 Andy Clark, the two-time James Beard Award semifinalist and head baker and owner of Moxie Bread Co., is scraping and molding a viscous, bespeckled dough on his work station one Thursday morning. On top of the flattened, wet heirloom wheat dough, Clark layers reddish-purple Bloody Butcher corn polenta made with garlic, cumin and butter. He sprinkles over hominy that has been nixtamilized (an Aztec technique of soaking and cooking food in an alkaline solution), and then adds a final layer of sage, toasted pine nuts and white cheddar.

As he combines the dough, he admits he doesn’t know exactly what the concoction will turn into, but that he was inspired to fiddle with the ingredients after a recent trip to the Grain School at the University of Colorado Colorado Springs, at which the conversation between the participants (bakers, farmers, grain enthusiasts, historians and more) turned toward the future: How can food producers make using more sustainably grown food realistic for people?

The answer to solving the problems of the future: Look to the past.

“Here we are in the Southwest with all of these cultures, whether it’s indigenous, Hopi or Mexican or whatever,” Clark says. “And so we did some baking down there with some corn. We taught people that this year’s crop versus last year’s crop could be quite a bit different and maybe you add a ton more water, maybe a little less, maybe you bake it longer or shorter, but you pay attention to it. You don’t just throw it together and walk away. And we also worked with a bunch of corn and perennial wheat to demonstrate that in the future, maybe it doesn’t have to be all [conventional] wheats, maybe Aspen Moon Farm is growing corn and lentil beans… well, let’s make that into food, let’s include all of that.”

In order to help be the change Clark wants to see in the grain economy, he’s opening The Mill Site in North Boulder this Spring. In the back, there will be a nonprofit wholesale granary for local farmers to process their crops — one traditional obstacle in the grain revival is the high cost and specialized equipment in milling heritage grains, beans, corn and other crops. In the front, there will be what Clark calls “the sweetest bulk department you’ve ever seen,” with locally grown and milled grains available by the scoop and a well-curated selection of responsibly grown culinary knickknacks from Utah pink salt to molassasey Costa Rican sugar that Moxie uses in its cookies.

There will be a library of recipe and reference books, and Clark envisions everyone from restaurant owners and chefs to home cooks coming in to pick the staff’s brain, try out recipes and fill in the gap between wanting to switch to local grain and actually making the investment to do it.

And Clark believes the time is right to encourage people to make the switch. Clark helped launch a “quasi-national” campaign to get more organic heirloom grain in Whole Foods 10 year ago, but the effort flopped. Since, awareness about the health, social and environmental benefits of local grain has risen. Clark is hoping The Mill Site removes every obstacle to those interested in implementing local grains.

“I think now we’re in a really great spot to add the educational base, so it’s not just like, ‘Oh here’s some grain, good luck.’ It’s like, ‘OK, you’re opening up a taco truck and you’re wanting to know what the best native corn is. Well, geez, we know a nixtamilizer, we know a grower, we’ll invite him over, we’ll have a meeting and then you can actually talk to them about how to make your tortillas.’ We’ll grind the grain, but there’ll be so much more added to that process and I think that will be the game-changing part.”

Switching from conventional all-purpose flour to local heirloom wheat is not difficult. Clark recommends making a one-for-one switch in pancakes, waffles and quick breads, and if you’re a savvy home cook or baker, you’ll easily be able to tell if any adjustments need to be made to your recipe. You’ll also notice a robust, pleasant fragrance emanate from your doughs that translates into flavor.

In fact, Clark likens the difference between heirloom and conventional flour to bison and beef: If you’re making burgers at a cookout and someone brings the former instead of the latter, you might cook it less because it’s leaner, but in the end, you still have a burger — and a healthier and tastier one at that — with little additional effort.

“In talking to really skilled food-makers, they say, ‘Gosh, I’m interested in using some of these local grains or doing more whole or heritage grain, but it just sounds really hard. What do you do?’ And I look at these people who are otherwise dialed in, I’m like, ‘Believe it or not, it’s a very minor adjustment.’”