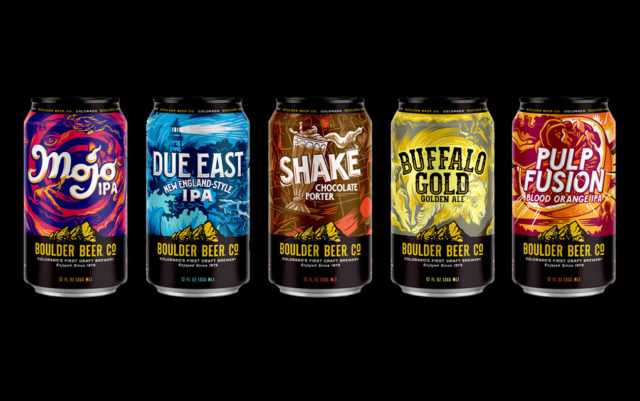 Story time: A tried and true Boulder craft drinker peruses the shelf at his favorite liquor store. With a tongue for hops and a yen for what’s new, a bright blue can catches his eye. He reaches, and what does he find? Boulder Beer Company’s Due East, a New England-style India pale ale. Our drinker, born and bred in Boulder 51 years ago, is nothing if not familiar with Colorado’s first craft brewery; though, it’s been some time since he’s knocked a few Boulder brews back. And yet here he is, with a Boulder Beer back in his hand. Funny how those things happen.

If you’ve ever wondered why breweries, or any business for that matter, change and update their logo/artwork/theme every five or so years, the above should illustrate why. New sells, and new is what Boulder Beer has: packaging, that is.

Of the six, Due East and Feistbier are new to the lineup while the other four are familiar favorites. According to Boulder Beer brewmaster David Zuckerman, the recipes inside have remained the same; you’ll still be able to enjoy Buffalo Gold’s malt-forward drinkability, Mojo’s piney hops, Shake’s delectable chocolate malt and Pulp Fusion’s brunch-like citrus. For those who are hunting around for the IPA du jour, Due East offers plenty of juiciness while maintaining a firm backbone of bitterness. It may not have the cloudy haze its New England-style brothers sport, but one does not drink beer by sight alone. Due East is one of the best in Boulder Beer’s lineup, along with Feistbier, a slightly sweet helles-style lager perfect for September and October.

The rest of Boulder Beer’s standards will also be getting artwork upgrades in the coming months. Hazed, a hoppy session ale, will even get a recipe tweak when it hits shelves next month.

And if the new packaging doesn’t trip your trigger, how about a couple of new brews to try? Over at the Pub on Wilderness, Cold Hop, a British pale ale is pouring from carbon dioxide, nitro and cask taps. Considering its British roots, Cold Hop seems to play best on cask, which gives the brew a smooth and creamy mouthfeel, highlighting the maltiness of the beer — particularly on the finish, where the cereal grains shine — while maintaining a balance of bright citrusy hops.

And when Boulder Beer on Walnut switches over to Squared Pizza + Beer, Cold Hop will pair nicely with those Detroit-style pizzas. Helmed by Frank Day, Squared Pizza + Beer takes over the Walnut brewpub in September. The brewing operations will still function as Boulder Beer’s research and development, which means there is no end of new brews to try along with the classics.