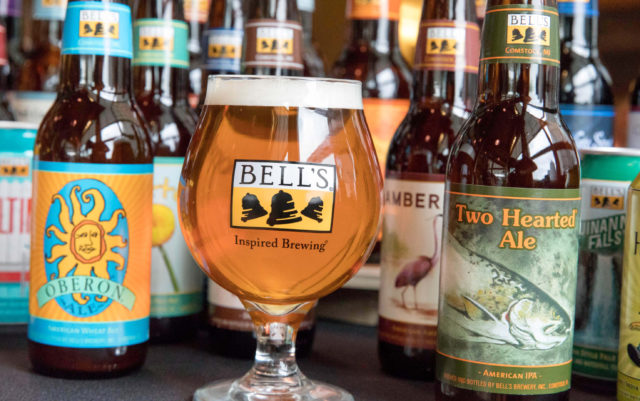 If shelf space at your liquor store wasn’t already crowded enough with Colorado craft galore, two out-of-staters have arrived, ready to vie for your hard-earned beer dollars. But the two in question aren’t just a couple of posers looking to get in on that sweet CO market; they are the real deal, a couple of O.G.s from craft beer’s early days. Boulder, please meet Bell’s Brewery from Michigan and Brooklyn Brewery from New York.

Named after founder Larry Bell, and initially known as The Kalamazoo Brewing Company, Bell’s Brewery opened as a homebrew shop in Kalamazoo, Michigan, in 1983. In 1985, they started producing beer, and in 2018, Bell’s finally found its way to Colorado shelves.

Their key label, Two Hearted Ale, is an American-style IPA made with 100 percent Centennial hops. The availability of Two Hearted Ale is enough of a reason to welcome Bell’s to Colorado, as you will be hard-pressed to find a more consistent and balanced IPA. Incredibly aromatic with strong notes of pine, resin and earthy grass, and boasting loads of hoppy goodness in the mouth with a pleasing amount of bitterness, Two Hearted Ale is an IPA for IPA drinkers who miss the old days. Crystal clear in the glass with sticky lacing down the sides, Two Hearted is a lovely reminder that not every IPA need be juicy, hazy or sweet.

In addition to Two Hearted: Bell’s Porter, a dark and robust ale perfect for cold nights; Lager of the Lakes, a crisp and refreshing Bohemian Pilsner with just a touch of herbal hop bite; and Kalamazoo Stout, made with brewer’s licorice, can also be found in bottles and cans at your better liquor stores. Some are even on tap around town — what a fine time to be alive.

Though not quite as old as Bell’s, Brooklyn Brewery brings a bit of historical heft to the beer shelf. Started by Steve Hindy and Tom Potter in 1988, Brooklyn Brewery hired the nattily dressed Garrett Oliver as their brewmaster in 1994 and have reaped a great deal of success ever since. Especially in 2014, when Oliver won the James Beard Award for excellence in the category “Outstanding Wine, Beer or Spirits Professional.”

But an award does not a brewery make. For that you need beer — good beer — and Brooklyn does not disappoint. Their iconic hoppy amber lager, Brooklyn Lager, is a benchmark of the style: spicy and floral Cascade and Hallertau Mittelfrüh hops on the nose with a hint of malt sweetness that continues to the tongue. And with a pleasant snap of bitterness, Brooklyn Lager begs to be paired with roast chicken or savory cheeses.

Keep your eyes peeled, and you might also find Bel Air Sour: a crisp, tart, tropical ale that pairs nicely with a gaudy Acapulco shirt. Perfect to cut through those cold winter nights as a little bit of wishful drinking.