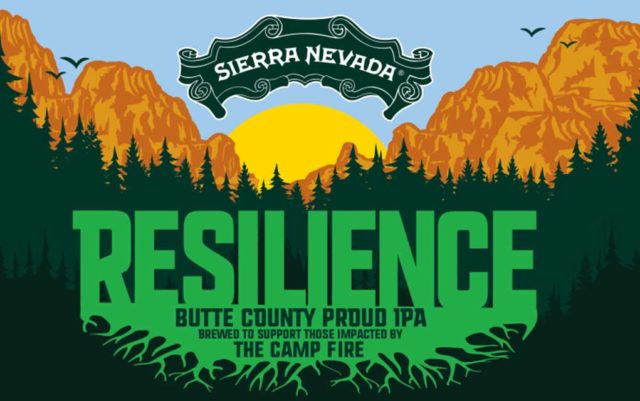 When it comes to the legacy craft brewers, few stand as tall as the Sierra Nevada Brewing Company of Chico, California. Founded in 1979 by Ken Grossman (a pioneer among pioneers) and Paul Camusi, Sierra Nevada and its iconic pale ale are synonymous with the full-flavor-beer revolution that defines the craft beer marketplace.

With a deadly combination of high winds, low humidity and severely dry conditions, the California Camp Fire started burning in Butte County in the small community of Pulga. It took only minutes for the fire to spread. For the next 15 days, the Camp Fire burned over 153,000 acres of land, including the town of Paradise, destroyed over 18,000 structures, caused 86 civilian fatalities and somewhere between $7.5 and $10 billion in damages. It was the most destructive wildfire in California’s history to date.

Sierra Nevada and the town of Chico were spared — but just barely. Photos posted on Sierra Nevada’s Instagram show apocalyptic doom looming on the horizon. Now the brewery is ready to help others who weren’t so lucky. The answer: Resilience Butte County Proud IPA, a fundraising IPA brewed to benefit all impacted by the Camp Fire.

Pulling some rather hefty strings, Sierra Nevada got nine malt suppliers and six hop suppliers to donate the ingredients. It even convinced wholesalers and retailers to join the effort, shipping and stocking the beer and donating 100 percent of the sales to the Sierra Nevada Camp Fire Relief Fund. And it also called the brewers — 1,400 in all — to brew the beer with 100 percent of sales going to help Butte County. No one beer is going to save the world, but Resilience is more than a start.

Made with Rahr 2-row and Crisp Crystal malt, and Centennial and Cascade hops, Resilience IPA sports a deep reddish color with a large, rocky head. The nose is earthy with a solid whiff of pine, which continues into the mouth with more snappy hops and a smooth and clean flavor. It’s a damn tasty beer — good for the stomach, good for the soul.

It’ll take years of work and an awful lot of help to rebuild Butte County. What better way to start than with a cold beer?