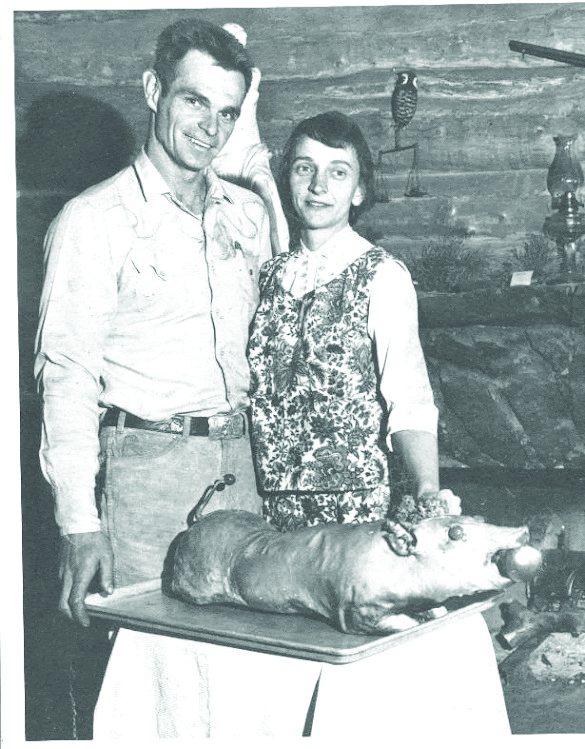 The Gold Hill Inn opened in 1962. That year was so long ago that all the memories are in black-and-white. The rustic eatery began serving 60 years ago when John Kennedy was president and John Glenn was an astronaut. It was the time before the invention of the internet, CDs, cell phones and personal computers. Few Americans had color TVs to watch The Beverly Hillbillies, the No. 1 show.

That was the year that an adventurous young couple, Barbara and Frank Finn, visited a closed-up, run-down building in a barely-there mountain town at the top of a long, steep, rutted and winding dirt road. They had hopes of transforming the log building into an eatery that would entice guests into making the trek to 8,300-foot Gold Hill for dinner. The family had four children, including their very young son, Brian.

“They were a little crazy,” recalls Brian Finn. “There were maybe five families living in the town of Gold Hill. Dad was a postman, so they didn’t have any money, but they borrowed $12,000 to buy the place.” Today, Brian runs the Gold Hill Inn with his brother, Chris, who is in charge of the kitchen.

From the beginning, Gold Hill dining was different.

“They decided they were going to do the table d’hote—table of the house, the full six-course meal—in the middle of nowhere. Mom would take popular recipes, like from Julia Child, and mold them into her own style,” Brian says.

Chris Finn usually lists four to six entrees on the chalkboard menu at the entrance to the dining room. The most popular dishes in 2022 have been popular for decades: broiled stuffed cold-smoked rainbow trout and bacon-wrapped beef tournedos with hunter sauce, and roast lamb with rosemary sauce.

“When it first opened, the scientists at the National Bureau of Standards in Boulder discovered the place and loved it,” Brian says. “When some of them went to Antarctica, they built an igloo for instruments with a sign out front that said ‘Gold Hill Inn.’ An Associated Press photographer shot a photo of the sign that appeared in publications nationally.”

The Gold Hill Inn has survived the decades, in part, because it wasn’t open year-round. “My parents would shut down the inn for the winter, pack us in an old school bus and take us down to Mexico where we camped on the beach,” Brian adds.

Brian continues the tradition by going to the family’s fishing cottage in Key West, Florida, every winter.

Every May the Gold Hill Inn reopens, having survived fires, floods and recessions. “The pandemic was the biggest challenge in our history,” Brian says. “One day we were looking at our huge side yard we only used for concerts on three holiday weekends a year. We decided to try putting out some tables, serving food and drinks and having live music. It was a huge success immediately and it saved us.”

It was the first time in its 60-year history that the restaurant served an a la carte menu. The inn continues to serve that menu in its bar room and beer garden. “It’s a blast. Now it’s my favorite thing we do,” Brian says.

“When we come out into the yard with our usual big, heavy plate loaded with three vegetables, a starch and an entrée, people are like, ‘Whoa! That’s a real dinner.’ It wasn’t just a cheeseburger,” he says.

The mountain cabin experience diners encountered in the 1960s remains much the same now. On a recent Saturday night at the Gold Hill Inn, the place was packed. The worn, slightly warped wooden floor is the same as it ever was, along with the huge fireplaces, historic artifacts on the walls and pull-chain tanks on the toilets in the restrooms. People still belly up to the big old bar to order the Kirby Bump, a historic cocktail made with rum, bitters, fresh orange juice and house-made fresh ginger beer.

The Gold Hill Inn has long been a beloved concert venue that has hosted the likes of John Hartford, The Dillards and Guy Clark. On this particular June evening, folks find seats in the yard for a dinner concert featuring old favorites, Drew Emmitt and Andy Thorn of Leftover Salmon.

As twilight shadows the foothills, you could hear the clink of glasses and the sound of everyone in the yard singing along. Barbara and Frank Finn would be pleased by how their wild idea has taken root 60 years on.

A social media message posted in the past week by the Niwot Tavern: “Please! For the LOVE OF GOD! Stop going to restaurants if you are not feeling well! We are all trying to continue to do business! We are all short staffed to begin with and then, when you bring your sicknesses to us, we then have to close because we do not have healthy staff! Please be respectful of others’ health.”

Or, sometimes, floatin’ Ireland in a soothin’ kind of sass

That left a sort of pleasant ticklin’ in a feller’s throat,

’Nd made him a hanker after more of Casey’s table d’hote.”