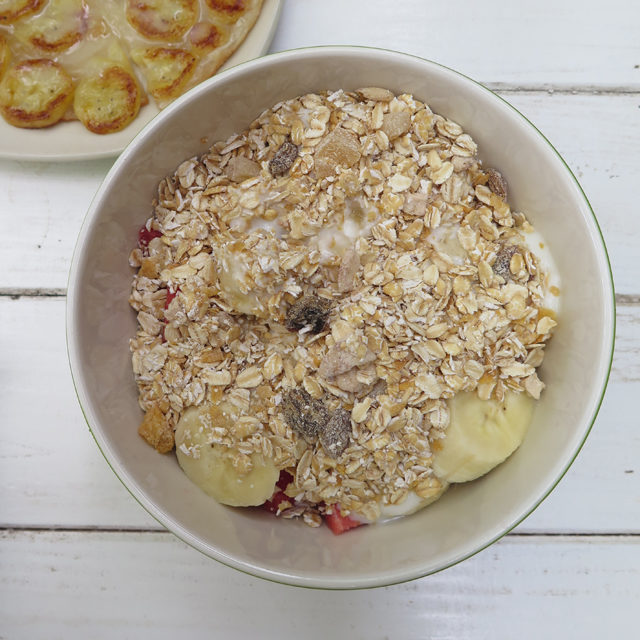 Thanks to a last-minute reprieve, one of Boulder County’s quirkiest annual food events will take place as scheduled on Jan. 12. For the 23rd year in a row, you will be able to crown a bowl of oatmeal with more than 100 toppings. Quaker Oats — the event’s sponsor and raison d’être — had announced last year that it was ceasing its financial support.

After an outcry from locals and oatmeal enthusiasts who labelled the company as The Grinch who Stole the Porridge, Quaker Oats wisely rescinded its decision.

The humble 23rd annual Lafayette Oatmeal Festival is highlighted by a fitness run and a hot oatmeal breakfast starting at 7:30 a.m. at Pioneer Elementary School. I attended the first Oatmeal Festival and a few since, and the main attractions are the toppings. While there are a few non-sweet toppings including jalapeños, bacon, hot sauce and grated cheese, the vast majority of festival-goers take the opportunity to heap on the sweet stuff including berries, gummy bears, chocolate chips, crushed cookies, fresh fruit, dried fruit and nuts.

It’s dessert for breakfast, a tradition Americans whole-heartedly embrace, but I wonder if it isn’t about time for an oatmeal dinner during the Lafayette Oatmeal Festival? While grain-based bowls are jst becoming a “thing” in the U.S., people across the globe have been asking for savory porridge for centuries.

Long before shrimp and grits were found on Southwestern menus, maize gruel was a big fuel for Mesoamerican peoples. Global savory grain variations include grits variations like creamy polenta, couscous, risotto and Asian congee, the thin rice porridge made with green onions, meats, eggs and vegetables.

I’m an unabashed, lifelong fan of the chewy, creamy, fruity melding that makes hot cereal such a winter pleasure. As a meal, hot cereal has a lot of appeal as it can be organic, locally sourced, high fiber, gluten-free, dairy-free, low-sugar, high protein and thrifty.

I bake oven batches of hot cereal that include old-fashioned oats but also a mix from a changing roster of grits, polenta, almond flour, quick barley, rye flakes, puffed millet and leftover steamed rice. Some of them need to be pre-cooked or pre-soaked.

However, I also cook the same grain mixture without sweetness or dairy — sometimes with broth — and set it aside as a canvas for savory purposes. One of my favorites is the combo of creamy cheesy grains topped with eggs, smoked ham or turkey and sautéed onions, red bell peppers and such.

Last summer, I made an exceptional batch of steel-cut oats with off-the-cob grilled Colorado corn, diced peaches and goat cheese. The other night I used it as a base for a batch of chicken green curry. Other brunch variations include oatmeal rancheros — with all the usual ingredients — and grains topped with shakshuka — eggs poached in spicy, vegetable-studded tomato sauce.

By the way, the most famous hot cereal reference in English literature is not a request for seconds on Cinnamon Brown Sugar Oatmeal with Dinosaur Eggs. When Oliver Twist said, “Please, sir, can I have some more?” in Charles Dickens’ classic novel, he was requesting more gruel, a savory soup.

Dickens wrote that Twist was fed “three meals of thin (oatmeal) gruel a day, with an onion twice a week, and half a roll on Sundays.”

My favorite taste over the holidays was a flashback to growing up in New England. I got a hankering for mincemeat pie and found a baker who makes them by special order: Karen DeVincenzo, who creates pies and other goodies for the Jamestown Mercantile. She hit the mincemeat pie sweet spot with a meat-free variation packed with candied orange peel, dried fruit, spices, brandy, pear, apple, cherries and walnuts in a flaky crust. It was perfect with a slice of extra sharp Cheddar.

“I have trouble with toast. Toast is very difficult. You have to watch it all the time or it burns up.”      — Julia Child

John Lehndorff is a prep cook, former Executive Director of the American Pie Council, and host of Radio Nibbles on KGNU. Podcasts:  news.kgnu.org/category/radio-nibbles