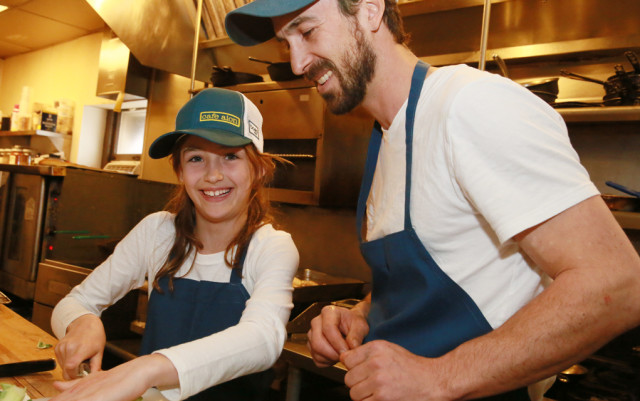 Remember the ’60s and ’70s? It was a time when rebellious Baby Boom parents — often named Mike or Susan — gave their kids interesting names like Rainbow and Peace. Meet Dakota Soifer, named and raised by self-identified “hippie parents” in rural Maine with a big garden, chickens, a goat and an unexpected piece of furniture in the kitchen.

“My Dad was a chef and managed restaurants but both of my parents are amazing cooks. I just grew up around food. I remember making trips to Boston to pick up ingredients,” Soifer said as we sat at Arabesque in Boulder, his choice as a meeting place. Soifer sipped coffee, ate an omelet sandwich and pondered the path that led him from an architecture degree at University of Colorado Boulder to his comfortable Cafe Aion on the Hill.

After graduation, Soifer worked in San Francisco at the legendary Zuni Café before the lure of Boulder brought him back to cook at The Kitchen and present farm dinners.

Soifer opened his bistro in 2010 in the old Aion Bookstore space, an unusual location because chef-driven eateries are not exactly common in that neighborhood.

There is a definite Spanish and Moroccan accent to the food at Cafe Aion, including Wednesday paella served family-style with a bottle of wine. “It’s all about great ingredients — eggplant, peppers, good meats. I love that the menu is not fancy-French and has really bold flavors,” he said. Consider his best-selling small plate: fried cauliflower with saffron yogurt, toasted cumin seed and lemons.

Unlike many local chefs, Soifer has not expanded his empire. “I’m way behind the curve — five years in business, and I haven’t opened a second place. I don’t know if they are happier for all the success,” he said. “There are other things in life.”

He’s happy that Zaya, his 8-year-old daughter, goes to Flatirons Elementary School just down the street from the restaurant. She comes in and helps him with prep work. “I finally got to buy my first house in the foothills. Now I have a Suburu and a chainsaw,” he said with a wide grin.

Soifer does want to get out of the kitchen a little more, so, starting April 2, he’ll man the new Cafe Aion paella booth at the Boulder County Farmers’ Market in Boulder.

How did you start cooking?
“My parents liked to have a lot of friends over for dinner. I learned by helping — one time we made dumplings for 20 people. We would go into Boston to find supplies. When I had birthday parties, my friends would come over and we’d make our own food. There was a couch in the kitchen so that was where everybody hung out.”

How did you end up in Boulder?
“I came here in 1999 to ski and climb. I also got a degree in architecture from CU, but I despised working in an office. What architecture does teach you is to think about how spaces like restaurants affect people. I had a job at Rumba (now Centro) while I was in school. I talked my way in. It was an awesome experience, and I also helped reopen the West End Tavern.”

Name a menu item that failed?
“I loved our whole grilled sardine with breadcrumb salsa, but it never really took off. I think sardines are a tough sell and breadcrumb salsa might be hard to ‘get’ until you try it.”

Where do you source ingredients?
“I get produce from Oxford Farms (greens, tomatoes), Aspen Moon (winter squashes) and Monroe Farms (melons), and meat from Frank Silva, a rancher. An Italian lady raises great-tasting rabbits that I use in paella.”

Where do you grab a bite in Boulder?
“I really like Thai Avenue in the food court on the Hill, also Tibet Kitchen. I like the new My Ramen & Izakaya on 28th Street and the tacos pastor at La Chosa. It’s a legit taqueria.”

Can you share any seasoning secrets?
“I like to toast spices in a cast iron pan — only a single layer thickness over medium heat. That’s how you release the aromatics. They are done when you start to smell them — then get them off the heat. We toast almost all of the whole spices we get from Savory Spice Shop and then grind them. We do tons of cumin and coriander, also, black onion seeds, chilies, cinnamon, star anise, cardamom and caraway seeds.”

Mushrooms steak-style
This recipe from Soifer for a tapa or small plate is designed to be accompanied by a glass of dry sherry.

Trim woody root off mushrooms and save for stock. Use a thick-bottom pan with enough space to fit mushrooms in a single layer. Crowded mushrooms will steam, not sear. Heat 2 tablespoons of olive oil over high heat. When the oil is almost smoking (but not burning) add mushrooms. Let them cook for a while before stirring. It’s like searing little steaks versus sautéing mushrooms. After 3 to 4 minutes, when mushrooms are browned, stir in butter, garlic and thyme. When garlic turns golden, add stock and simmer until liquid reduces, add sherry and stir on heat briefly. Season with salt and pepper and serve over soft polenta, or on grilled, garlic-rubbed bread drizzled with extra virgin olive oil.

To make mushroom stock: Simmer woody oyster mushroom trimmings with chopped carrots, onions and celery and fresh herbs (like rosemary) in enough water to cover for about 30 minutes. Add more water as needed to produce about one cup of stock.

Taste of the week
Steam wafts up from the flour-dusted whole wheat pita bread that chef Manal Jarrar pulls from the oven at her cozy Arabesque, 1634 Walnut Street in Boulder. The soft pitas are served with a creamy blend of chèvre and cow’s milk cheese in spiced olive oil. The breakfast and lunch menu includes pastries, chicken shawarma, salads, hummus, tabbouleh and baklava.

Words to chew on
“I’m in favor of liberalizing immigration because of the effect it would have on restaurants. I’d let just about everybody in except the English.” — Calvin Trilli 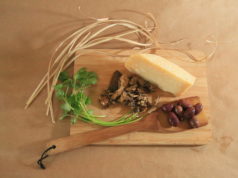 Umami: The next level 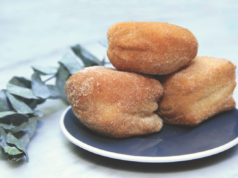 Bread for the role