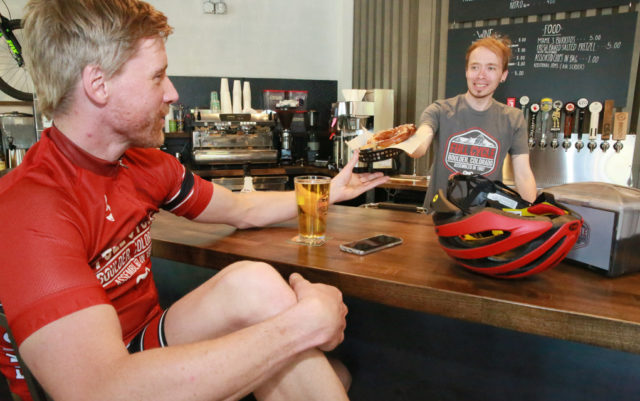 Recent reports about the death of retail shopping have been greatly exaggerated. Big box shopping certainly is threatened by online ordering and home delivery. We still want to shop but the experience has to be more than just wandering around under harsh fluorescent illumination.

Gone are the days when a storefront could just sell bikes and repair services. Now, there must also be nitro cold-brewed Ethiopian Harrar coffee. Why shouldn’t shopping for personal loans and Scandinavian bookshelf kits come with a break for tasty snacks and tiny meatballs?

The latest expression of that duality is the new addition to Boulder’s iconic Full Cycle bicycle shop, 1795 Pearl St., where an in-store bar serving beer, wine and espresso is pouring alongside bike repairs and sales. It follows in the footsteps of Longmont’s CyclHOPS Mexican Bike Cantina and Kettle and Spoke, the mini-brewery inside Boulder’s Green Guru, 2500 47th St. The maker of bike gear offers a nice patio where you can talk spokes and sip Raspberry Saison, Pineapple NEIPA or Whiskey Oaked Porter.

Full Cycle is just down Pearl Street from Capital One Café (in the former Boulder Café space, which, ironically, once housed a bank). The location serves Peet’s Coffee drinks, baked goods and informal chats with a “Café Ambassador,” formerly known as a “teller.”

Alpine Modern already had a café at 904 College Ave. on the Hill serving quinoa porridge, apple Manchego paninis and Prosciutto waffles along with craft beverages. The company recently added Alpine Modern, 1048 Pearl St., a shop offering home décor, accessories and books reflecting a distinctive minimalist design sensibility that can be pondered while sitting and sipping at a coffee bar.

Boulder businesses combining food and drink with other services is not a new concept. Boulder’s venerable Trident Bookstore has long fused Americanos and literature. Some supermarkets including Whole Foods and Alfalfa’s have coffee and juice bars and dedicated dining areas. Englewood’s Garibaldo Mexican Bistro is inside a Conoco gas station with a window view into the car wash, and Lakewood’s Casa Bonita is really an amusement park that also sells some swell sopaipillas.

Are these dual dining destinations really selling a setting where like-minded customers — whether bike, book or board game fans — can gather to socialize and post to social media? Is it another part of the new sharing community economy or simply a reflection of our growing need to be constantly caffeinated?

It’s just a matter of time before public consumption of cannabis is legalized and treated the same way as alcohol and cigarettes. One day soon I suspect that Boulder will see the opening of Puff-n-Stuff, a combination cannabis and hemp clothing shop and all-you-can-eat organic buffet with nacho cheese and chocolate fountains.

By the Numbers: 2 Billion

Colorado may be more famous for other crops but the state’s farmers produce more than 2 billion pounds of 70 different varieties of potatoes annually including fingerling varieties such as Austrian Crescent, Banana, French, LaRatte, Red Thumb, Rose Finn Apple and Purple Peruvian. Colorado is the fifth largest spud producing state in the nation. Not that you need an excuse to make mashers but potatoes are fat-free, gluten-free, sodium-free and high in potassium and vitamin C … at least before you add the butter, milk and cheese.

Please step away from that well-crafted IPA, and sip with a lot less bitterness for seven days. Opening ceremonies for Cider Week Colorado are 6-8 p.m. Monday at Longmont’s St. Vrain Cidery. (ciderweekco.com) The festive week of events concludes May 27 in Denver with the Pressed Conference, the largest hard cider tasting of the year in the state. (thepressedconference.com) … Boulder’s venerable Walnut Brewery will close on June 4 and reopen in July as Boulder Beer on Walnut, joining Boulder Beer’s longtime East Boulder brewery and pub. I remember when it was based out of a rural goat shack. It makes sense that Colorado’s oldest craft brewery would have a presence downtown, joining another new arrival, Oskar Blues, which will be opening in the former World of Beer space. … Noted Denver chef Kevin Taylor (of Palettes at the Denver Art Museum) is set to open Hickory & Ash restaurant in Broomfield’s Arista complex in June. … Bryan Dayton (Oak at Fourteenth, Acorn) and chef Amos Watts, will open Corrida atop a new building at 1023 Walnut St. serving Spanish steakhouse fare and a rooftop rarity in Boulder — unobstructed views of the Flatirons. … Chocolaterie Stam is open at 103 N. Public Road in Lafayette offering chocolate truffles, a wide selection of licorice (including the salty type), caramel-filled stroopwafels and house-made gelato in cherry cheesecake, chocolate almond, grapefruit and other flavors. … Coming soon: Endo’s Brewing Co. at 95th and Arapahoe in Lafayette. Its neighbors include the Super Mini Walnut Café, the Brewing Market and the historic Smash Burger location where the successful national chain was born a few years back as Icon Burger.

Boulder County has no shortage of new, authentic pizzerias to try out but I found myself recently returning to one of the area’s Neapolitan originals, Proto’s Pizza. I sat down at the pleasant Lafayette location for a super-thin crusted pizza topped with fresh basil, pepperoni and mozzarella. The price per square inch of pizza here is a little steep but the wood-fired, flavor is still great. My crisp slices matched up well with a good pour of Proto’s Sala Upkeep, their house California red wine blend.

“Skipping breakfast suggests indifference, or a dangerous inability to treat one’s body as the superb, well-cared-for instrument one knows it to be. … For a corporate hopeful, the only proper breakfast route is the life-preserving, cancer-daunting, palate-numbing route of bran.” — Janet Maslin, The New Republic, December 1986

John Lehndorff is the former Dining Critic of the Rocky Mountain News. He hosts Radio Nibbles 8:25 a.m. Thursday on KGNU (88.5 FM, 1390 AM, streaming at kgnu.org.) Read his food blog at: johnlehndorff.wordpress.com. Comments: nibbles@boulderweekly.com