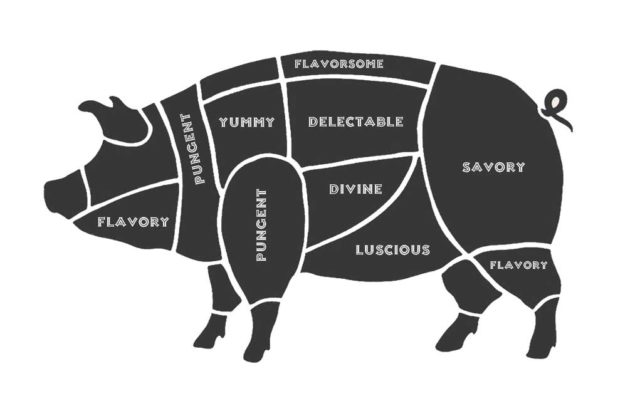 Every ham you bake and every breakfast link you sizzle starts out exactly the same way with a hog dying and its carcass being disassembled. It’s a fact that most American carnivores don’t want to face most of the time even as they refer to various tasty body parts from shoulders to belly.

There is an old saying attributed to cranky Prussian Otto von Bismarck: “Laws are like sausages, it is better not to see them being made.” The idea is that if you observed what went into making sausages you would be less inclined to eat them. My philosophy as a semi-carnivore is that unless you are willing to watch the sausage (and pork chops and coppa) being made, you shouldn’t eat it. It lessens the horrible disconnection Americans have from their food sources.

I’ve attended animal butchery demonstrations in the past but recently jumped at a chance for a refresher course at the home of Loree Mulay, co-owner of Longmont-based Mulay’s Sausage. The company makes hot Italian, bratwurst, breakfast links and chorizo sausage sold frozen at Natural Grocers and other markets. Mulay says she only uses humanely raised, antibiotic-free lean, whole muscle meat so the links are juicy but not greasy as well as free of gluten, nitrates, dairy, MSG, sugar and soy.

Like some sort of Paleo Picasso with a blade as a brush, butchery expert and instructor Jason Nauert carefully works through the muscles, bones and sinews of half a hog, in this case a Duroc heirloom breed raised in Brush. The cuts are smaller and the meat is much darker and tastier than factory-farmed pigs.

As he works, Nauert talks about whole-animal butchery, respecting the animal and not wasting any piece of the pig. “You save these parts, the face meat, for head cheese,” he says. Head cheese is a non-dairy product consisting of pig bits suspended in gelatin and sliced as cold cuts.

“Ah, leaf lard,” Nauert says. That’s the stuff you want to render to make the flakiest pie crusts on the planet. The pigskin is fried for chicharrones, the bones make stock for pork green chile, he says.

He points out the picnic shoulder, the Boston butt and the tenderloin and cut off the jowl for guincale — a form of bacon. “That’s a 2-inch ‘man chop’ there. I like pork chops thick. You leave the fat until you finish cooking because that’s where all the flavor really is,” he says. He identifies out the cuts used for porchetta, a boneless pork roast, and lardo, seasoned, marinated fat sliced thin on bruschetta and pizza.

It’s a revelation the first time you watch a skilled butcher using short, sharp, curved knives and a flexible handsaw, but not for the squeamish who have watched too many horror films. The talk here is all about spines, blood, livers and recognizable body parts, but even vegetarians and vegans can appreciate an artisan who insists on using literally all parts of a hog. It’s about knowing the source of the meat you eat and how it was treated from birth to death. That’s not something you can know about the shrink-wrapped pork loin at the supermarket that came from a huge, anonymous factory-farmed hog.

They say you never want to watch laws and sausage being made. As is sometimes the case, “they” are wrong in both cases.

It was Freudian slip perhaps, but I typed “farm-to-table sinners” instead of “farm-to-table dinners.” There is some truth there, as the term “farm to table” has been turned into an adjective and applied woefully to meals, eateries and supermarkets that are less than passionate about local sourcing and sustainability. To get a true taste of local farms and ingredients, head to one of the many farm dinners on farms in the Boulder area taking place in September:

The Lafayette BrewFest, featuring 20-plus brewers plus wine, food and music, is 2 to 7 p.m. Saturday, Sept. 10 in the parking lot of Lafayette Florist (600 S. Public Road). Meanwhile, free baked potatoes for all and a “mashed potato war” are on tap Saturday and Sunday at the San Luis Potato Festival in Monte Vista.

My periodic craving for spankopita brought me to the Mediterranean Market & Deli, 2690 28th St. (facing Bluff Street). I love dipping the filo dough-wrapped spinach hand pie in thick yogurt sauce, a dab of sriracha sauce and zataar, a great dip made with wild thyme and olive oil. I like the market’s pie because it isn’t drenched in butter like the usual Greek variation. Opened in 2006, the deli overseen by Libyan-born Salem Garni also sells gyros, falafel, hookahs and imported foods including Milka chocolate bars, pistachio candies and Bosnian and Turkish canned goods.

“She loved recipes. Clipped them from the newspaper, kept them crammed in cookbooks and stuffed in bowls around the kitchen. She read them like fiction, intrigued by the possibilities they suggested, but hardly foolish enough to take them as literal instructions for real life.” — Ronni Lundy in Victuals: An Appalachian Journey.