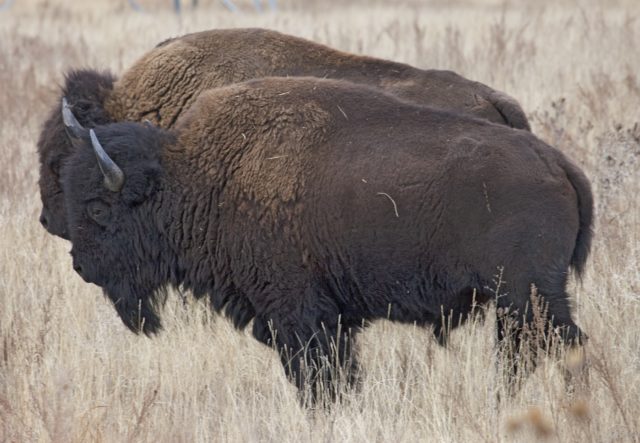 I hate to be a bummer, but there are only 144 shopping days until Christmas. More importantly, there are only four weeks left until summer is unofficially over on Labor Day. There will be some sunny days before summer really closes on Sept. 22, but they will be shorter and colder. In the months ahead you can cocoon with comfort foods and binge-watch Breaking Bad. Right now you need to eat that fresh corn out of doors. Almost anything tastes better al fresco with the vibrant visuals, breezes and piney aromas as appetizers. One of my most cherished possessions is an aluminum artist’s case from the 1950s that my mom used to pack sandwiches and fruit in to bring to the lake or the pool.

Colorado has a plethora of fine eatery porches, patios, roofs and street corners where you can dine, but picnics are personal. Here are a few favorite change-of-pace picnic spots to enjoy before the season winds down.

Picnics with bison: This is a big year for bison (or buffalo) in Colorado, home to more than 11,000 bison, according to the Westminster-based National Bison Association. It is the 100th anniversary of the death of Wild West showman “Buffalo Bill” Cody who is buried on Lookout Mountain, and the 50th anniversary of the first time Ralphie the buffalo charged onto the field at the University of Colorado. The all-female series of Ralphies will be celebrated Oct. 28 at Folsom Field at the homecoming game versus the University of California. There are only a few locations in the state where you can have a close encounter with a bison herd. The most famous spot is the Buffalo Herd Overlook on I-70 at Genesee Park, but that familiar pull-off is actually quite a ways from the bison pasture. Instead, keep going to the Chief Hosa exit and follow a dirt road to a second, much better site away from the highway, with picnic tables and grills and a pasture where the herd often gathers, especially early in the morning and late in the afternoon. Somehow, eating buffalo jerky here seems wrong.

Head to the wonderful Rocky Mountain Arsenal National Wildlife Refuge near Aurora for a self-guided, 11-mile, 45-minute (or so) drive through a beautiful park. Giant cattle guard gates alert you that a bison herd lives here. So you drive and when you find the herd blocking the road, stop and pull out the PB&Js but stay in the car. Signs helpfully note: “Bison are wild, unpredictable animals — do not try to attract their attention.”  There are also bison-free picnic tables available.

The other nearby bison herd picnicing spot is Daniels Park near Sedalia.

Watermelon and Bach: It’s tradition to grab a spot early just outside Chautauqua Auditorium on concert nights for the Colorado Music Festival. For the Baroque era, I recommend counterpointing Longmont goat cheese and Denver salumi with a Boulder Riesling and a Louisville loaf.

Urban world eats: On Tuesday and Thursday afternoons, the largest gathering of food trucks in the state dishes everything from barbecue pork to dumplings in Denver’s Civic Center Park. Yes, it’s crowded and parking is hellish, but what a memorably intense out-of-Boulder food encounter.

Portraits and picnics: Away from the shelters and picnics tables at the overlook on Flagstaff Mountain is a gem of a snacking spot, the west-facing Artist Point. Grab a rock for a seat. If you’re lucky, there will be an artist working to capture the changing panorama. It is contemplative there so don’t bring loud crunchy food like Cheetos and chicharron; slowly slurp a ripe Colorado peach instead.

Nibbling by the pool: It still surprises me how many folks never head out to one of the chillest, prettiest escapes in the area, the Eldorado Springs Pool south of Boulder. I don’t recall the picnic menu from my first visit but I’ll never forget the feeling of that first plunge in ice cold water.

P.S.: Check for any remaining seats to an epic dinner in the middle of Larimer Square: Dining Al Fresco at 5 p.m. on Aug. 19. larimersquare.com

Getting into grilled yellow beets

Get out of your backyard barbecue routine and grill some beets while they are fresh and cheap. The following recipe is based on one chef Jason K. Morse devised for enjoying Colorado yellow beets:

Trim the roots and stalks of the beets, remove any dirt and wash. Preheat your grill to about 250 degrees. Place the beets into a medium bowl, drizzle with olive oil and toss. Place the beets on the preheated grill and cook for about 90 minutes or until they are fork-tender. Remove beets from grill, place in a bowl, cover and let sit for 20 minutes. Remove from the bowl and carefully peel beets. Cut into small wedges and place into a bowl. Drizzle with olive oil, season with salt, pepper and minced fresh herbs. Allow to sit for 10 minutes. Arrange beets on a plate, top with dressing, chevre and candied walnuts.

“I think Yelp is neither good nor bad for the food industry. I find it useless … aggregating a lack of expertise. … If you are a huge food geek like me that really believes in quality — not expensive food, just quality … Yelp is not for you.”