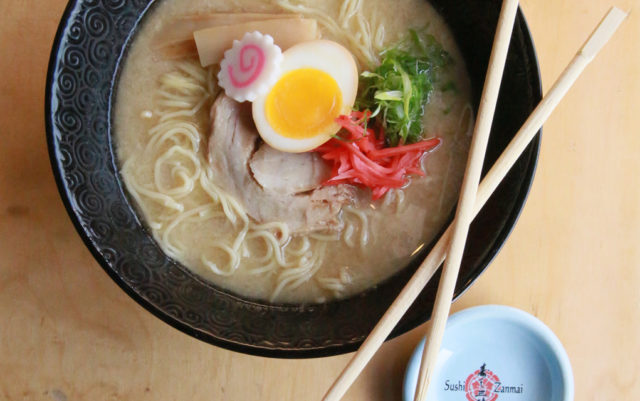 The ramen I grew up with is not the ramen I love as a grownup.

It’s confusing, much like a tangled mess of wheat noodles. Ramen — the instant noodle with the foil “flavor” pouch — didn’t exist until the early 1970s when the Japanese product was first imported into American kitchens. If you could boil water, you could eat a warm meal, which made ramen the de facto favorite meal of starving college students.

Ramen was cheap and especially filling because the block o’ noodles is deep-fried and then dried. Ramen, like pizza before it, wasn’t considered “ethnic” so it became another convenient American dish that we tossed with every topping imaginable, or whatever was in the refrigerator.

In that spirit I got a copy of The Book of Ramen (Turtleback Books) by Ron Konzak when it was published in 1993 and promptly placed it in the novelty cookbook box along with more recent additions like Cooking with Coolio.

I had kept the book in that box but never opened it until recently when I’ve been thinning the tonnage of food books and paraphernalia I’ve accumulated.

Consider this a cautionary tale of not judging a cookbook by its cover which modestly touts “Lowcost gourmet meals using instant ramen noodles.” It’s not a joke but it is funny and thoughtful. Konzak dedicates the book “to the Japanese Buddhist monks of  Nippozan Myohoji” and offers this nerdy tidbit: “After selecting a package of ramen at random and carefully boiling and taking it apart, I found that the package contained 80 strands of noodles about 16 inches long.”  He also contemplates the flavor packet and possible replacements such as miso broth.

The 75 mainly vegetarian recipes include Kitsune Ramen and stir-fried Yaki Ramen, as well as Ramen Borscht, Chinese Cold Noodle Salad, Rambalaya, Armenian Pilaf, Arabic Noodles with Rice and Hot Cold Szechuan Noodles. Ramen also stars as a raw ingredient. The Herbed Cream of Carrot Soup is thickened with pulverized noodles. There are even ramen-based desserts ranging from Noodles with Prunes and Orange Pineapple Cream Ramen to deep-fried Ramen on a Stick.

It wasn’t until years later that I discovered the “other” ramen thanks to Tampopo, one of the greatest and wackiest food films of all time. The 1985 Japanese Western comedy concerns two truck drivers who help a restaurant owner become a master at making real ramen. Wheat noodles are submerged in a meat or fish broth often topped with pork, seaweed and green onions and the soup is consumed according to a specific slurping ritual which is honored and parodied in a classic Tampopo scene.

Now that real ramen is easy to find in Boulder, the restored 30th-anniversary version of Tampopo makes a rare return to the big screen. The Flatirons Food Film Festival showing on March 12 at CU Boulder’s Muenzinger Auditorium includes a ramen sampling courtesy of Black Cat Bistro and Rama Ramen and an exhibit of cool Japanese culinary knives. An after-showing slurp session takes place at Boulder’s My Ramen & Izakaya. Tickets: http://tinyurl.com/FFFFramen

The following recipe adapted from The Book of Ramen is named after Welsh rarebit or “rabbit,” the cheddar-beer sauce typically served over toast. It is also known as ring tum tiddy. Seriously.

Salt and pepper to taste

In a small saucepan boil noodles in 2 cups of water for about six minutes. When noodles are done, put in strainer, rinse with cold water, shake and drain thoroughly until dry.

Mix flour, mustard, curry powder and Worcestershire sauce into cold ale or stout and slowly bring to a boil, stirring often to keep it from sticking. When thickened, add cheese and stir, cooking until melted. Thin as needed with water or beer and season to taste with salt and pepper. Pour over drained noodles in a bowl. The Book of Ramen recommends serving the dish with steamed asparagus or broccoli for dipping in the cheese sauce. There is also a beverage pairing tip: “Consume with the unused portion of ale or stout, of course.” 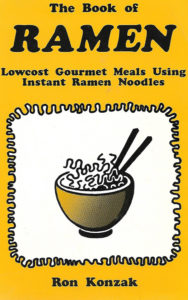 Frasca Food & Wine is a semi-finalist in the national Outstanding Restaurant category for the 2017 James Beard Awards. In the Best Chef Southwest category, Eric Skokan of Boulder’s Black Cat Bistro and Steven Redzikowski of Boulder’s Oak | at fourteenth, and Acorn in Denver are nominated along with Alex Seidel of Denver’s Fruition and Mercantile.  … Boulder will be represented by Blackbelly Market’s Hosea Rosenberg and Cured’s Will Fritzhorn at Cochon 555 on March 19 at Denver’s Curtis Hotel. Cochon is a surreally meaty sustainable food celebration with a whole pig heritage barbeque competition.  cochon555.com/2017-tour/denver … It’s not too late to join the hive mind this summer. The Farmette hosts a beekeeping introductory class March 18 in Lyons. lyonsfarmette.com. … You can also improve your summer by learning to make burrata, butter, ricotta and mozzarella (March 20). bvsd.org/LLL … Kids Culinary Summer Camps: Italian (June 5-9), Asian (July 17-21), Latin American (Aug. 7-11). foodlabboulder.com.

J. M. Smucker Co. is planning a $340 million plant in Longmont. I’m happy to see the hundreds of jobs coming to the area, but I will admit I was unaware of the huge demand for a product one can make at home in seconds for pennies: Smucker’s Uncrustables frozen peanut butter and jelly sandwiches. The current, sole plant in Kentucky makes up to 2 million Uncrustables per day.

Sometimes the messiest food is the most comforting, like the classic Firecracker Roll I picked up at Boulder’s Hapa Sushi. Luckily, I was home when I dove into the wrapped shrimp tempura, avocado and cucumber topped with spicy tuna. I also had the traditional masago mayo, wasabi and tempura crunch on my shirt.

“There is absolutely no substitute for the best. Good food cannot be made of inferior ingredients masked with high flavor. It is true thrift to use the best ingredients available and to waste nothing.” — James Beard