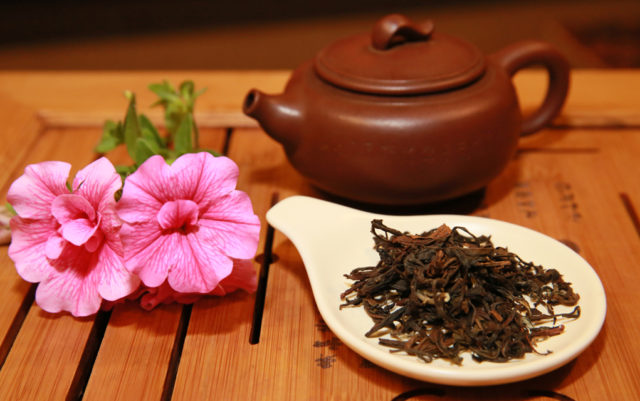 It takes a lot for me to give up on iced tea for the calendar year. I always rue that day because I know what it means. The sweaty season is over and the dark falls faster with each evening. The first morning frost on my 1-year-old mirasol pepper plant made me accept the fact that I was done downing quarts of brewed iced tea until spring 2017.

Strong coffee remains my go-to beverage to jump-start the day, but by afternoon it’s cold or hot tea time, a habit I picked up in college in Montreal where I used lots of tea bags, sugar and milk. I make a better cup now, but I admit that I don’t know all that much about tea. I called a tea expert.

My friend Brian Keating wrote the 2015 book How to Make Tea: The Science Behind the Leaf (The Ivy Press) with Kim Long. A Denver native, Keating is a nationally known tea consultant who created Sport Tea in the ’80s — a product still in supermarkets. He was the first tea blender hired by Whole Foods Market.

How to Make Tea talks about the hundreds of ways to make a pot of black, green and white camellia sinensis and tons of details about chemistry. Frankly, I don’t need that much information. I talked to Keating to find out how to make as good a cup of tea as possible without getting all compulsive about it. He offers a few basic rules.

Rule No. 1: “The worst thing tea drinkers do is use bad water. Most municipal water supplies are highly chlorinated and it ruins the taste and in some cases the nutritional aspects of tea. It’s the No. 1 offender,” Keating says. Use a home water filter or spring water. Don’t use distilled water because it lacks the minerals that bring tea flavor to life.

Rule No. 2: “Everyone tries to complicate it. Tea is just pouring boiling water over some leaves, but it has to be the right temperature. Boiling water works best for black tea and oolong varieties,” Keating says.

The exception to Rule No. 2 is green tea. “For green tea you bring the water to a boil and then let it cool down for three or four minutes. If you use too hot of water on green leaves, the tea turns bitter and acrid. The reason green tea isn’t more popular is that it’s prepared wrong,” he says.

Rule No. 3: Always warm the tea pot with boiling water. “The water has to stay hot enough in the pot to steep properly,” he says. It also helps to warm up the cup. 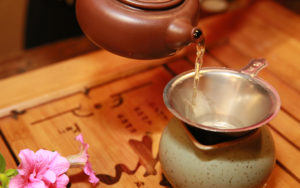 Rule No. 4: Don’t worry about weighing the tea leaves. The old rule of thumb was one rounded teaspoon of loose tea for each cup and one for the pot. “That old English rule still works.,” Keating says. “Weighing grams of tea is for geeks.”

Rule No. 5: To make a pot, just put the leaves in the pot and strain or use a diffuser. “You want enough space around the leaves so the juices and polyphenols come out,” Keating says. You also have to get the steeping time right. “I tell people to experiment. Usually black or oolong for three to four minutes, green is less, only two to three minutes,” he says. White tea is the exception, needing five to six minutes. “The altitude doesn’t make that much difference. Some people steep it a little longer in the mountains,” Keating says. He admitted that his first pot of black tea on a foggy Seattle morning gets steeped a little longer to increase the caffeine impact.

Rule No. 6: Adding milk to tea was an effort to lessen the harshness of the “cheap, bad tea” that was first imported into England, Keating says. “I use a little soy or nut milk. There’s some research that shows that cow’s milk may reduce the antioxidant effect of tea,” he says, adding that you never add milk to oolong or green tea because it ruins the taste. Actually, I happen to like milk in my oolong.

Rule No. 7: Keating is not a fan of tea bags, but most of us use tea bags a lot of the time. “If you have to use tea bags, look for the pyramid-style tea bags that have more room for the water to circulate around the leaves,” he says. The same rules apply by the cup: Warm it up and use good water. “You can still make a very good cup of tea with a tea bag if you do it right,” he says.

Rule No. 8: “The bottom line is to keep tea away from heat, light, moisture and spices. Aromatics from spices will infuse in the tea,” Keating says.

I’ll let you know if I successfully upgrade my tea time.

Conor O’Neill’s Traditional Irish Pub closes Sunday, Oct. 2 after 17 years of Guinness and the World’s Shortest St. Patrick’s Day Parades. The previous tenant, the James Pub, had been open for 20 years. Another downtown eatery, Caribou Coffee, has closed at 1207 Pearl St. Former occupants include Panera Bread, Paradise Bakery and Woody Creek Café, but for a generation of locals it will always be Potter’s. I spent a year at Potter’s one summer making onion rings in that kitchen. … Beta carotene finally gets recognized at Carrot Day, 9 a.m.-1 p.m. at the Boulder County Farmers’ Market in Longmont. At the carrot sampling you will find out that all carrot varieties don’t taste alike.

I got reacquainted recently with one of the coolest condiments created in Boulder: Karami Japanese Salsa. This is not some chef’s misguided attempt at cross-cultural fusion food. For years in Colorado, immigrant farmers from Japan have substituted roasted Pueblo chilies for the unavailable seaweed in a traditional relish used on steamed rice. Karami is a true wonder condiment that’s spicy and sweet and salty and basically, a bottle full of vegan umami. Great on steamed grains and grilled fish, it is also perfect for chips, burritos and tamales. Karami is available at local supermarkets and exported to Japan.

Side order of sustainability