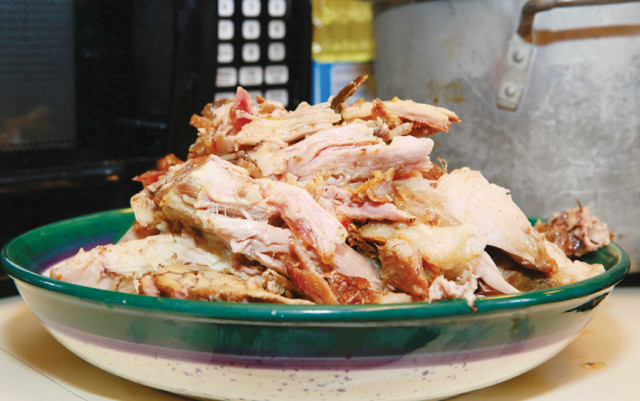 The last time the Denver Broncos went to the Super Bowl, I invited folks over for a party. We were all set with a table packed with cool foods and beverages.

A minute into the football game when I was still working in the kitchen, it was essentially over. The game went downhill from there fast. The smorgasbord seemed less than appealing by half time and the post-loss depression was deep, wide and long.

I should have known better. I had watched the Broncos lose a lot of Super Bowls. In 1987, 1988 and 1989 I edited special Broncos Super Bowl food sections for the Daily Camera. One section featured an eye-catching bowl of pasta X’s and O’s on a field of cheese soup. (Trust me, there are few foods that are a naturally bright Broncos orange and even fewer that are truly blue.)
All of those games were crushing defeats. Finally, the Terrell Davis-led Super Bowl wins in the 1990s did a lot to ease the collective pain.

Once again we find the Broncos in the big game after a truly hair-raising season. By the way, this will be Super Bowl 50 — not Super Bowl L — because only a few people who took high school Latin like me know how to read Roman numerals any more.
For Super Bowl L I’m skipping the fancy fare and sticking to the comforting glow provided by pork green chile. I’ll have it with warm La Favorita flour tortillas and extra sharp cheddar cheese paired with a nice hoppy brew.

Green chile. How you spell it and cook it has preoccupied philosophers and politicians from Santa Fe to Denver for decades. I’m an eater, not a fighter. All I can do is tell you a story about how I made this batch of pork green chile.

I won’t give you the recipe and it’s not because it’s a “secret.” I hate following recipes, writing recipes and editing recipes. I’d rather just wing it. I’ll get ideas from a recipe, but I won’t let ingredients and directions be the boss of me. It means that each batch is a one-time-only thing.

I’ve typically gone with pork loin in making a chunky green chile because it’s easy to use, but pork shoulder roast was so cheap when I shopped, I bought one even though I had never roasted one. I put this gigantic piece of meat fat side up in a deep pot and coated the top with minced garlic, salt, black pepper, red pepper flakes, rosemary and a bunch of green herbs, including sage.

I forgot the roast in a 300-degree oven for about three hours, then drained and saved several unctuous inches of exceptional broth. I cranked the oven to 400 degrees and put it back in for 30 minutes or so to crisp and brown the meat. When done, the roast had shrunk in size by half and it literally forked apart into chunks and crispy shredded pork. If you take it out and it doesn’t fall apart, put it back in for another 30 minutes until it does.

When it cooled, I drained the fat off and hand-shredded the meat and saved the few bones. There was so much meat I filled a few freezer bags with pork and tucked them away for future meals.

The next day I took the broth out of the refrigerator and scraped off the layer of lard on top. I thought about saving the fat to brighten some mashed potatoes but thankfully, dietary common sense prevailed. I simmered the broth plus additional water and pork bones for an hour or more.

An Italian pepper and cheese roll

Meanwhile, I added peeled and chopped yellow onions and minced garlic cloves to olive oil in a deep saucepan. I added a fresh Anaheim pepper I had roasted in the oven and peeled. The smoky perfume teleported me back to my first visit to New Mexico where I fell under the green chile spell at a food truck parked outside the Sanctuario de Chimayo. I also added ripe red mirasol “Pueblo” peppers I’d grown on my back deck last summer and frozen. I would also happily use frozen or canned green chilies.

At this point, I could have put this delightful mixture on a crusty bun with a layer of marinara (with or without a sausage) and sliced whole milk mozzarella and bake until melted and I’d have a traditional Italian-American treat.

Instead, I stirred in a couple of tablespoons of flour and added strained pork broth and kept it simmering until it started to thicken. I put in the chunks and shreds of pork at the very end so they wouldn’t fall apart.

Green chile is a process, not a result

You may need to add more broth or water. You will need to taste it multiple times as you go. When there’s no recipe you have to adjust the seasonings. For instance, this batch may contain trace amounts of Pabst Blue Ribbon, leftover coffee, malt vinegar, sugar soy sauce, red wine, Sriracha and cumin. I’m just not sure.

I like the flavor and mouthfeel of this batch. Deep background flavors form a canvas for broad brushstrokes of rich roasted porkiness with sharp chile accents.

Hope is a good thing and it springs eternal for the home team.

Boulder County food news update
Boulder’s Aloy Thai restaurant has spread its wings to Denver. After working with their Mom for 10 years in Boulder, sisters Bo Bean and Arisa Chanchokpong have opened Aloy Modern Thai at 2134 Larimer St., the former location of Trillium. The new eatery combines upscale décor and service and 21st-century cuisine from Thailand with a classy bar program. I was especially impressed with the subtly seasoned French-influenced sauces, such as the Mussamun curry dish with perfectly cooked Colorado lamb chops;  Chef Tim Payne, known for his cuisine at Longmont’s Terroir and the Tasterie food truck, has opened Farmer Girl restaurant dishing farm-to-table fare at 432 Main St. in Lyons, former site of the legendary Gateway Café; Coming soon: Via Perla, Ninth and Pearl, sister restaurant to Brasserie Ten Ten and The Mediterranean. Also: The butcher shop at Blackbelly, chef Hosea Rosenberg’s east Boulder eatery.

Words to chew on
“If you want a subject, look to pork!” – from Great Expectations by Charles Dickens.

A taste of time